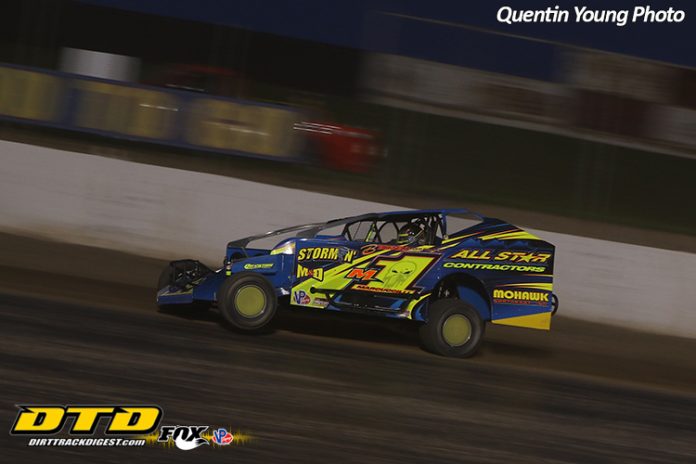 FULTON, NY – Dave Marcuccilli dominated the 358-Modified feature at Fulton, taking the lead early and running a flawless race en route to his first victory in the Modified ranks.

The top spot was hotly contested early in the 35-lap main, with Billy Shantel taking the initial lead, then surrendering it to Nick Krause two laps in. Krause kept true to the bottom early on, but fifth starter Dave Marcuccilli went upstairs and drove around Krause on lap five. Just as Maruccilli went to the lead up high, Ronnie Davis III slipped underneath Krause for second, and stayed within a couple car lengths of Marcuccilli through the opening stages. Once out in front, Marcuccilli dropped to the bottom of the speedway, running the same line as Davis next to the infield tires. Todd Root snuck around Krause for third in the middle of the track, but by the time the pass was completed on lap 10, Marcuccilli and Davis had walked away.

By lap 15, Marcuccilli’s gap over Davis had stretched to nearly two seconds, then an additional three back to Root. However, thick traffic was ahead, but Marcuccilli worked through the first handful of cars with ease. However, Marcuccilli eventually reached cars that were holding the bottom very well, which forced Marcuccilli to the top just after lap 20. This initially allowed Davis to close the gap some, but then Davis had to do the same and any distance gained was then lost. By lap 28, Marcuccilli had broken through the traffic and into some clear track, but Davis found himself still boxed in behind cars. Behind the leaders, Glenn Forward, Tim Sears Jr., and Larry Wight were having a solid battle for fourth, with Sears and Wight charging from eighth and seventeenth respectively.

With five laps left, Marcuccilli had one last round of traffic to deal with. While late-race traffic is a scary sight for a leader, Marcuccilli had built up a lead of nearly a full straightaway over Davis, a lead Davis couldn’t overcome in the short timeframe. After 35 caution-free laps, the checkered flag waived over Dave Marcuccilli for his first ever Modified victory. Ronnie Davis III came home second, with Todd Root, Glenn Forward, and Tim Sears Jr. rounding out the top five.


“After the way I’ve been running, I lost a little confidence in my ability,” Marcuccilli said. “We struggled with this car a little bit, and turns out it was just a bad bar on the right rear. Its been really good ever since I changed it, but we keep getting rained out after the heats. I’m just in disbelief got the win, I was waiting for someone to drive by me. I’m not used to leading in these cars, with the Sportsman I was more comfortable because when I was leading I knew whether or not I was good. With the 358, I wasn’t sure if I was really good, I know Ronnie was hanging around and Todd worked his way up, and I just didn’t know where they were running or what they had. I stuck to the bottom, and if someone drove around me I’d figure it out then.”

27 358-Modifieds signed in for action, a number that has stabilized and is the highest average weekly car count for Fulton’s headline division in 20 years. The top four drivers in Saturday’s Modified feature are all recent Sportsman graduates, with Marcuccilli making the jump this season, and Davis, Root, and Forward making the full-time leap at the start of 2018.