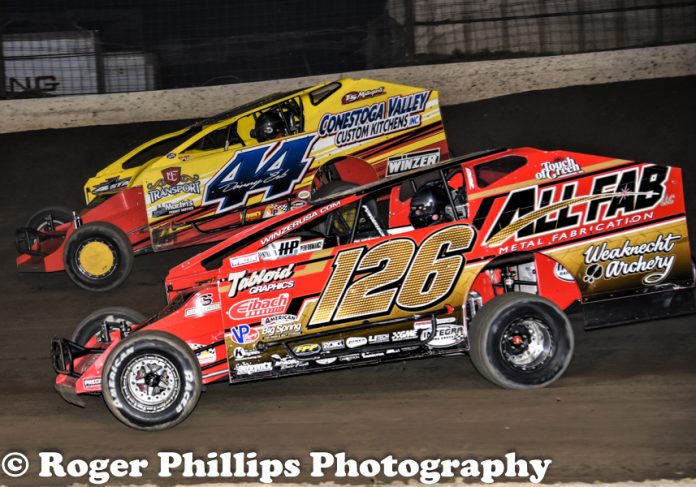 BECHTELLSVILLE, PA –  Jeff Strunk, the ten-time Grandview Speedway NASCAR Modified point champion, behind the wheel of the Glenn and Bonita Hyneman-owned/Tabloid Graphics/Teo No. 126 became the new leader on the 14th circuit and went on to capture back-to-back victories in the 30-lap TP Trailers NASCAR 358 Modified feature on Saturday night at Grandview. Strunk also won the Modified feature the last time they had run back on May 25th. The veteran racer commented that the track was to his liking because it was smooth and slippery taking on rubber as the race progressed. The racing activities were sponsored by long time NASCAR supporter Whelen Engineering.

Brian Hirthler, running third, took advantage of the situation when leader Brad Brightbill developed mechanical problems and swung around Ryan Beltz and Brightbill to take over first on the 22nd lap to score the triumph in the TP Truck Equipment 25-lap Sportsman NASCAR feature for his second win of the season in the event rained out June 1

In the regularly scheduled Sportsman feature, Derrick Smith, who hasn’t been in victory lane since August 26, 2017, led from the drop of the green until the wave of the checkered to record his first win of the current campaign.

John Willman, out of Modified action for a few weeks due to engine problems, returned and wasted no time resuming the lead from the pole being chased by Mike Lisowski, Ron Seltmann Jr., Kenny Gilmore and Kevin Hirthler.


Within eight laps, Willman had a sizeable lead built up, but by the 10th lap Lisowski was gaining ground.

A second turn tangle involving Clay Butler and Ryan Grim erased Willman’s margin as the yellow was thrown on the 11th lap. Willman’s hopes of a possible victory vanished when he slowed his pace stopping in the second turn. Willman’s loss was Lisowski’s gain since he was the new leader with Strunk in hot pursuit.

The caution was out again when Doug Manmiller found himself shoved into the first turn infield on the 13th lap. On the restart Strunk charged ahead to become the new pacesetter while Lisowski, Gilmore, Timmy Buckwalter and Craig Von Dohren composed the top five.

Von Dohren took over second on the 20th lap restart needed when Butler spun in the fourth turn to attempt to overtake Strunk who had already began distancing himself again.

Despite lapped traffic which sometimes a driver isn’t sure what they’ll do and use heads up driving, it didn’t slow Strunk down enough to allow anyone the opportunity to reel him in to challenge and he pulled into the winner’s circle for Saturday night career Grandview win No. 71. Second was Von Dohren followed by Buckwalter, Lisowski and Gilmore, for his season best finish.

Lisowski, Brett Kressley, Duane Howard and Steve Swinehart were the heat winners. The consi winners were Butler and Dan Waisempacher.

The comfortable margin Miller built up was erased when Kreis stopped in the second turn with suspension problems which brought out the yellow on lap 15. Miller resumed the lead with Guldin still trying to grab the lead, but now Brightbill, who started 27th; Beltz and Jack Butler were second through fifth.

Miller held on to first until the 18th lap when Brad Grim came to a half in turn two with heavy smoke billowing from the car. This restart saw Brightbill and Beltz charge past Miller as he fell to third and Guldin lost several positions.

Quick reactions on Hirthler’s part when Brightbill began experiencing problems saw him take advantage of the incident and shoot past Beltz and Brightbill into the lead.

Hirthler continued the pace to pull the 4-Star Lettering No. 117 into the winner’s circle followed by Beltz, Kyle Smith, Brandon Edgar and Grim, who after pit stops under caution got the smoking problem corrected.

These same drivers were ready to try and get into the regularly scheduled feature.

Qualifying heats were won by Smith, Guldin and Joey Vaccaro while Mike Mammana won the consi.

At the onset of the second Sportsman feature a multi-car tangle eliminated Mark Kemmerer, Brad Arnold and Beltz. When action went green again Smith was at the head of the pack being chased by rookies Vaccaro, Aaron Bowes, Nate Brinker with Andy Clemmer rounding out the top five.

The healthy lead Smith opened up vanished after the caution came out on the 13th lap when Kreis spun in the fourth turn. Smith resumed first on the restart but now Bowes, Brinker, Edgar, another rookie and Vaccaro were in pursuit.

Smith, who continued to run the bottom lane “because it felt good down there”, never looked back and went on to claim his second career win. This was certainly a better finish than the first feature since he placed last in that one. They must have found some speed since he commented he never had a fast race car before. Second through fifth were Bowes, Brinker, Edgar and Vaccaro.

The nationally famous Amsoil United States Auto Club (USAC) Wingless Sprint racers will be in action Tuesday night, June 11, in the annual Jesse Hockett Memorial Classic while the NASCAR 358 Modifieds will also be part of the doubleheader action. Gates open at 5 p.m. with racing getting the green flag at 7:30 p.m.

Saturday, June 15 the NASCAR Modifieds will compete in two 30-lap features, the first one being held over from June 1. A full show of qualifying for the Modified and Sportsman division followed by a 25-lap Sportsman will also be part of the show.