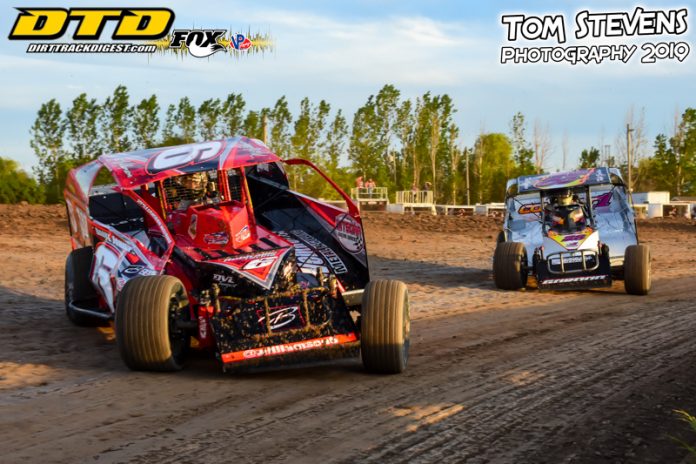 Shayne Pierce and Rob Knapp led the S&W Service Centre Modifieds to the green flag for their 35-lap feature event with Pierce showing the way over Todd Gordon. Ryan Susice spun, in turn, one to bring out the races first caution. Gary Lindberg and Mat Williamson worked their way through the field off the restart as Todd Gordon took over the lead on lap three. Williamson would take over second on lap five and would go after Gordon for the lead. Williamson would complete the pass to take over the lead on lap eight. Lindberg would take over second after going three-wide on lap 10 as Mike Bowman closed in on Pierce and Gordon for third place. Williamson, Lindberg, and Bowman would pull away from the field as Pete Bicknell moved into fourth place with 11 laps remaining. Off a lap 25 restart that bunched the field up, Williamson and Lindberg continued to pull away from the field and Williamson would go on to score the win.

King of the Crates Round one for the David Chevrolet DIRTcar Sportsman was led to the green flag by Ryan Ferri and Dave DiPietro with Ferri taking over the lead. Ferri would keep the lead as Brad Rouse moved into second. Ferri spun, in turn, one on his own to bring out the caution. The restart would see Rouse and Trevor Wright on the front row with Rouse in the lead as Jay Mallory took over second from Trevor Wright. Rouse would pull away from Mallory with Wright, Brent Begolo and Paul Gaboury racing inside the top five with Jordan Cosco racing in sixth. Brent Begolo would challenge Mallory for second with 10 laps remaining as Rouse started to pull away. Brad Rouse would go on to score the feature win, his first of the season at Merrittville.

Zach Bleich and Rob Disher brought the Hoosier Stocks to the green flag for their 20-lap feature event with Disher showing the way. Billy Bleich Jr would take over second place as Rob Murray and Jason Fontaine raced inside the top four. Disher would continue to show the way as Rob Murray closed in and challenged for the lead prior to the halfway mark. Disher and Murray battled for the lead as Fontaine and Blake Bomberry raced in third and fourth respectively. Murray would hold off Disher to score his second win of the season.

Home race number two for the Insta Panels Duel on the Dirt and the second race of the TMR Racing Triple Crown for the Central Fabricating 4 Cylinders was brought to the green flag by Leroy Buscumb and Olivier Larocque with Tony Kelly taking the lead exiting turn two. Off a lap three restart, Kelly would continue to show the way with Buscumb, Jay Moulton, Jeremy Cooper, and Kyle Rothwell battled inside the top five. Buscumb would regain the lead of a lap six restart as Rothwell and Tyler Lafantaisie entered the top five. Tony Kelly and Rothwell would battle for second as Anthony Kelly and Cooper battled for fourth. Buscumb slowed on the front stretch while leading to bring out the caution on lap 14. The restart would see Kelly in the lead as Lafantaisie, Cooper, Rothwell, and Olivier Larocque raced in the top five. Kelly would go on to score the win.


Dave Cornish and Randy Giroux led the Doidge Building Centre’s Mod Lites to the green flag with Giroux taking over the lead with Cheeseburger Iftody moving into second. Chris Watson would move into second after battling with Iftody and RJ Pietz on lap two. Jeffery May and Tyler Winger raced inside the top five with May battling Iftody and Giroux for the lead. Jeffery May would take the lead away on lap eight as Tyler Winger moved into second. Josh Sliter took over third place. Josh Sliter would take over second from Winger with four laps to go and would go after May for the lead. Sliter would take the lead exiting turn two with a lap and a half to go and would go on to score the win.

Kyle Irving took the lead away from polesitter Tina Ronning on the opening circuit of the Dave’s Auto and Speed Centre V6 feature event. Irving, Ronning, and Colton Lane pulled away from the field as John Couture moved into fourth place. Couture would pass Ronning for third on lap six and would go after Lane and Irving for the lead. Couture would go three-wide with Lane and Irving, but Lane would take the lead on lap nine. Couture would take the lead entering turn three and would go on to score his third win of the season.

NEWS AND NOTES: Fans had the opportunity to get their favorite driver’s autograph during the popular autograph session. 97 cars signed in pitside for competition.

Saturday racing returns on June 15 as Gaston’s Auto Sales presents a full Bobcat of Hamilton Weekly Racing Series program plus a home race for the Insta Panels Duel on the Dirt for the Hoosier Stocks. Fans can wear their favorite racing t-shirt (whether new or vintage) for the popular T-Shirt Contest.  Pit gates will open at 5, with grandstands at 5:30 and race time is scheduled for 7 pm.