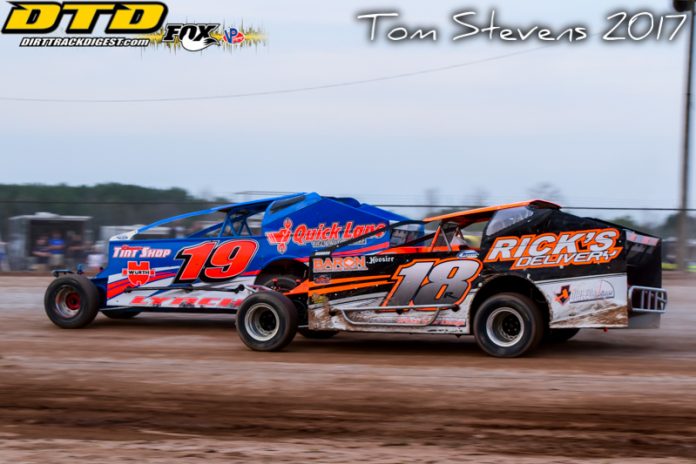 Jay Mallory and James Michael Friesen were on the front row for the Cosco Haulage DIRTcar Sportsman feature from Opening Night with Friesen in the lead. Rouse moved up to third, Rouse to lead on lap 7. Once out front, Rouse would not relinquish the lead. Rouse would go on to score the win. In the nightcap feature for the Cosco Haulage DIRTcar Sportsman, James Michael Friesen would use his pole position to take the lead away early from Jordan Cosco. Adam Leslie moved up through the field as would Brad Rouse to move into the top three. Friesen would lead all 25-laps to score the win.


Home race number one for the Insta Panels Duel on the Dirt for the JC Auto Thunder Stocks saw Billy Bleich Jr and Donny Lampman on the front row with Bleich showing the way. Bleich continued to show the way as Rob Murray moved into second place. Bleich dominated the event, leading all 20 laps to score the victory.

The Glo & Go Tanning Mini Stocks had their first home race as part of the Insta Panels Duel on the Dirt and it was Evan Curtis and Kourtney Kocarik on the front row. Cole Hardy flipped, in turn, one to bring out the red flag on lap one. Hardy was alert and talking to medical personnel and visited the on-track care centre. Jay Moulton and Evan Curtis would lead the field back to the green flag with Moulton taking the lead. Moulton, Curtis, Olivier Larocque, and Leroy Buscumb all battled for the lead in the closing laps. Moulton’s lead would come to an end on lap 15 after spinning in turn four.  Buscumb would hold off several challenges to score the win.

Mitch Dumont took the lead away from Danny Wurster on lap one of the 15-lap feature for the Airhardt Deliveries Pro 4 Trucks.  The first caution of the event would come out on lap six as Brian Aube hit the front stretch wall. On the restart, Dumont and Dylan Llord would pull away from the field as Llord would take the lead exiting turn two. Dumont would regain the lead with five laps remaining. Dumont would go on to score the win.

NEWS AND NOTES:  84 cars signed in pitside for the racing activities.

Next Sunday, June 16, Canadian National Autism presents the BEI Lightning Series for Sportsman plus Late Models, Thunder Stocks, and the rescheduled King of the 4’s event for the Mini Stocks and Pro 4 Trucks. The program will also feature a trailer race at the end of the night. Showtime is at 6:30 pm. All kids in attendance can check out the activities with the Humbee’s Kids Club presented by the Port Colborne Dairy Queen happening at 5:00 pm each race night.