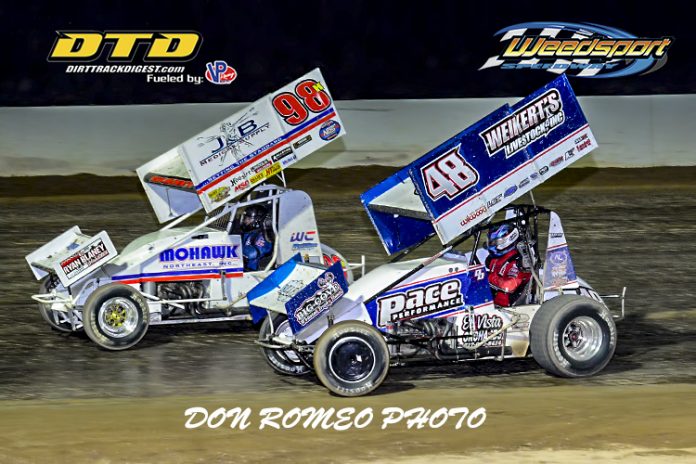 “Double D” Danny Dietrich was in the house with the Ollie’s Bargain Outlet All Star Circuit of Champions as they made their second visit to Weedsport Speedway on Sunday night.

As a member of the “Pennsylvania Posse” he is well known for his ability and the Williams Grove Speedway point leader came in looking to improve over last year’s third place finish in this event.

Starting back in row number four he worked his way up throughout the one yellow only event.

When second place Larry Wight bounded off the first turn wall with nine laps to go it bunched up the field and there he was behind leader Danny Varin.


It took four laps before he went to the outside of the 00 coming out of four to take the lead for good.

Dietrich captured his eighth feature of the season and reflecting on the latest win he said,

“I had planned to run with the All Stars on Saturday night at Stateline, but Port Royal had twin twenties. I had planned on being here at Weedsport all along.”

Continuing he noted that there were some adjustments in getting him to victory lane.

Sitting at his trailer fighting off mosquitos he said, “Tracks up here are a lot different than back home. They are really slick. You had to adjust and keep your head on right.”

The race didn’t go totally according to plan as he explained, “I hit the wall around the tenth lap and bent up the right rear between one and two. I probably bent a wheel, but you know that might have helped me as I told myself to calm down and his my marks the rest of the way.”

On victory hill he told fans, “Late in the race I thought the 70 (Spencer Bayston) was the leader and when I passed him I took the lead. We aren’t use to racing some of the local guys so I didn’t realize that I was chasing the 00 (Danny Varin). He was good on the bottom and I had to drive harder.”

Continuing he explained, “I had to get patient and I ran better when I slowed down.”