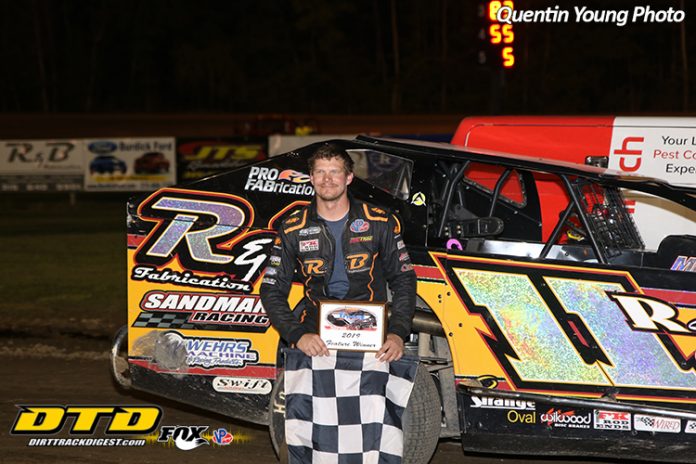 Every so often there is that moment that is quite important, but it isn’t that well known.

Such was the case at the Brewerton Speedway on Friday night as Robbie Bellinger drove the Ted Barcomb 11 back into victory lane for the first time in over 40 years.

Robbie, who hadn’t won a Brewerton feature in five years, said, “It was exciting for me as I knew how emotional Ted was over the win.”

Dirt Hall of Fame car owner Cliff Barcomb had cars on tracks with some legends behind the wheel.


Over the history of the racing team Alan Johnson, Pepe Pepicelli, Davey Moore, C.D. Coville, Buck Holliday, Dave Leckonby and even Sammy Swindell (Syracuse) have been behind the wheel

However, Cliff passed away and the Barcomb car disappeared with him.

Time passed and son Ted has brought the memory of his dad back to the speedways.

Dirt Track Digest reached out to Ted Barcomb to talk about the meaning of the June 8, 2019 return to victory lane.

Ted started out saying, “It was a very special night because all I’ve wanted to do since I lost my dad in 1993 was to put his colors back in victory lane. I was lucky enough to live a dream on Friday night. To walk into victory lane and see the 11 there was something I’ve dreamt about for a long time.”

Looking back, Barcomb said, “The last time the Barcomb car was in victory lane was in 1985 at the Lebanon Valley Speedway with Dave Leckonby driving.

“That win meant a lot to not just me, but also for Robbie, the team and all the guys who worked and drove for my father.”

Continuing he said, “I still think about my dad every day and a win with his colors is an incredible feeling. I wanted to keep his memory alive because he was my hero. I lost him too soon in my life. This is my way of keeping him close to me. I think he’d be pretty happy about this. I never gave up.”

Emotions are part of racing and Friday night was one of those moments.

Ted noted, “Putting the emotions into words is pretty tough. A lot of people along the way told me this would never happen. I think that dad would be proud that I never gave up.”

Rob and Ted have been together since 2014 and they are becoming more and more consistent.

Of the run on Friday night Robbie said, “The car is getting better and better. We are finding consistency which we haven’t been able to do.”

The Barcomb car will have other opportunities to return to victory lane as the team will be running Brewerton on a weekly basis and nearby Super DIRTcar Series races as well as Super Dirt Week. Robbie will also in the a small-block in partnership with Jeff Hayes for the rest of the year at Fulton, most small-block races and Dirt Week Shows.