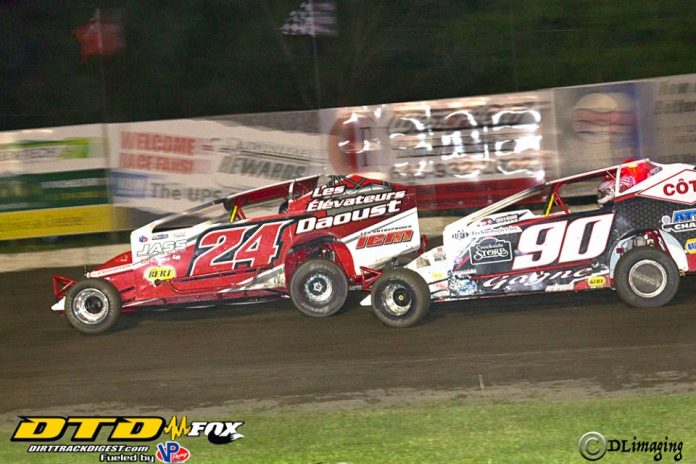 CORNWALL, ON – It was bargain night at Cornwall Motor Speedway with general admission at only 5$, a great night of racing in 5 classes. BDO Canada LLP was sponsoring the evening.

Mario Clair was the early leader in the Loud and Dirty 30-lap Modified feature over
Dany Gagné and Brian McDonald. Clair was quick when the race got momentum, but he
had to be careful on a few restarts as Gagné had a few chances to take the lead on these
conditions. Clair led all 30 laps to score the win, his first of the year over Gagné and
McDonald.

Johnathan Ferguson took the lead in the 25-lap Next Level Home Improvement
Sportsman feature over Shane Pecore and Justin Lalancette in battle for second spot by
lap 5. A lap 10 restart saw Pecore taking the lead from the outside over Ferguson and
Lalancette running in third. Pecore had the quickest car on the speedway and led the final
portion of the race to claim his third feature in a row.

The 20-lap Alexandria Home Hardware Pro-Stock feature saw Alex Gagnon landing on
his roof on lap 1 and red was out, Gagnon was ok. Dave Bissonnette was quick on the
restart and took the lead over Stephane Lebrun. Bissonnette broke the Lebrun and won
the event.


A lot of action in the 20-lap Eastern Ontario Vintage Club as Kenny Polite pulled in front
before the halfway point in front of Jason Powers. While Polite pulled away in the final
laps Powers got into battle with Paul Billings. Polite went on to win over Powers and
Billings.

In the 15-lap Assist2Sell Mini-Stock division Yanik Potvin took the lead as Justin Jodoin
jumped to second with James Clarke in third. Potvin held his way in first with Jodoin
Clarke. Jodoin had a strong ride and passed Potvin for first at halfway point. Jodoin never
looked back and got his second feature in a row in the division.

Another great event next week as the Lightning Sprints are back for a second time this
season along with a complete program in all divisions.

For more information on the upcoming season at Cornwall, please visit the website at
www.cornwallspeedway.com you can add us on Facebook at
www.facebook.com/cornwallspeedway , twitter at @cms_speedway, and now on

Instagram under Cornwall Speedway, we will use these media platforms for results and
contests over the summer.