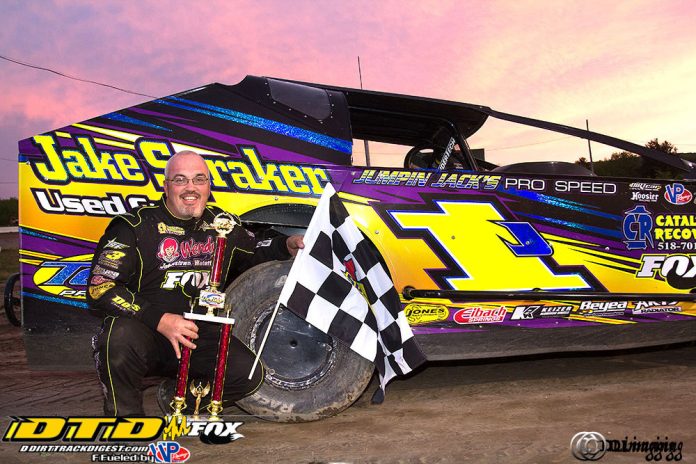 FULTONVILLE, NY – When you look around at the local area racetracks one name seems to be in almost every press release, and that driver is Johnstown New York’s resident Flyin’ Squirrel Rocky Warner. With Modifieds & Sportsman on the racing card this past Sunday night at the Glen Ridge Motorsports Park, Warner swept both features.

By virtue of a heads up start for the Palmer’s Service Center Modifieds, Warner and ‘Iron’ Mike Ricci brought the field to green for a 35-lap bullring battle with Warner getting the hole shot headed into turn 1. Bobby Varin, Jackie Brown Jr and Michael Maresca quickly jolted to the bottom of the speedway with outside pole sitter Ricci bringing out the caution flag on lap 1. The battle would now be on with the master of the sportsman vs the master of the modifieds at the Ridge: Warner and Varin. Warner would once again take off setting sail into the sunset. Varin, Brown, Maresca, Randy Green were the running top 5 all jockeying for position. Another caution would slow the field and give Varin another shot at Warner. On the restart Warner would once again take off and cruise to his 3rd career victory at The Ridge followed by Varin, Maresca, Green and Brown.

In the Red Chair 602 Crate Sportsman feature event, Rocky Warner would once again make a statement on the early 2019 racing season. Scott McCoy & Warner led the field to green with Warner once again taking off where he left off from the modified feature. Brian Calabrese, Andrew Buff and the rest of the field would take to battle and try to catch Warner, but to no avail. Warner picked up his 3rd Red Chair 602 Crate Sportsman event in a row. Calabrese, Buff, Joe Orlando, and Chad Edwards would complete the top 5.

The ‘Cuz’ Luke Horning showed his muscle once again becoming a force to be reckoned with as he battled car builder Nick Stone tooth and nail until lapped traffic would end up being the deciding factor of the outcome. Horning running the high side side by side with Stone for nearly half the race had the preferred line for lapped traffic and got the advantage and the hard-earned victory. Stone finished 2nd followed by Ivan Joslin, Jim Normoyle and Andy Graves.

The ‘Racing Gibbo’ Brendan Gibbons took another step in proving he can wheel an open sportsman car by picking up his 2nd career Glen Ridge victory in the Limited Sportman main event. Gibbons picked up the victory in dominant fashion over Bill August, Tucker O’Connor, Harold Robitaille and Brett Mortensen.


The Hammer Cliff Haslun outdueled a high flyin Clifford Booth to earn his 2nd win of the season in a well earned victory. The exciting street stock feature was fast and furious, but Haslun was able to keep Booth at bay followed by Damon Anderson, Ken Allen and Jason Samrov.

So far this season the racing has been amazing, but each week the All-Star Slingshot division seems to top themselves. Mike Hill jumped out to an early lead with a close following Brett Putnam. Danny Ballard and The G-Man Garrett Poland, who is turning into Mr. Highside lately, followed closely. Putnam pulled up to the top of the speedway with 3 laps to go to get around Hill to pick up his 2nd win of the season. Hill settle for 2nd, Ballard, Poland and Tyler Vadney completed your top 5.

The Ridge is back in action this Sunday June 16th with the 1st ever visit by the 607 Wash Pro Wingless Racers Alliance Sprint Car Club and it is Fan Appreciation Night, with meet & greets on the track!