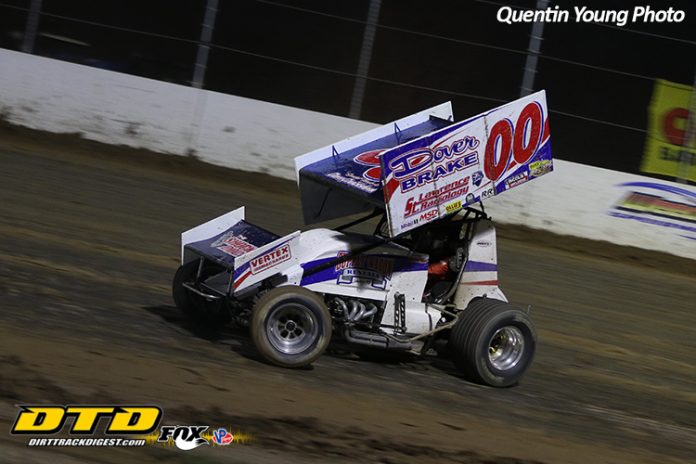 While Danny Dietrich sat on Weedsport’s victory hill as the king of the All Stars on Sunday night sitting at the bottom of the hill were Danny Varin and Spencer Bayston.

They later duo was relegated to the lower level as they finished behind “Double D” in the 35-lap main-event.

Certainly Varin, who led until there was five laps left, was disappointed, but standing in his trailer after the run he certainly masked any disappointment that might have been there and looked at the positive.

In only his fifth 410 start he had spent the weekend running two of the three All Star mains. On Friday night he finished fifth at Outlaw Speedway, but instead of headed to Stateline on Saturday he said, “We went to Fonda to run the Modified where I was able to win one and finished fourth in the other.”


With help from car owner Dave Cruickshank and crew chief Paul Northrup, Varin has made a quick impression in 410 events he had elected to enter.

He was all smile as he reflected on the night, but was quick to give credit where credit was due.

Danny said, “I’ve got a great crew and car owner. We are approaching each race with a consistency game plan. We arrive at the track with exactly the same set up and then we adjust accordingly.”

On his second place run he explained, “After that caution I just wasn’t going as good as I was before. I just didn’t have the speed at the apex. It just wasn’t enough.”

When asked how a Modified driver with limited experience felt against some of the stars of the tour he said, “I am a little more intimidated. I had a bad case of nerves all night long. Against these drivers you have to perform. There is no room for mistakes. The stress on me is unbelievable. We are a rookie team in 410’s. I’ve watched many of these guys on television and it is something to run with them.”

As far as the feature is concerned he will gladly accept second place, noting, “Danny Dietrich put himself in great position to get the win.”

So for the time being he’ll head back to the Mods and maybe some 360 Sprint racing, but come early July the 410 will come back out as he will once again join the All Stars at Utica-Rome Speedway on Friday, July 12. The All Stars are also running Orange County and Lebanon Valley that weekend and it will be interesting to see if he runs those.

However, it’s been shown Danny Varin will be a contender.