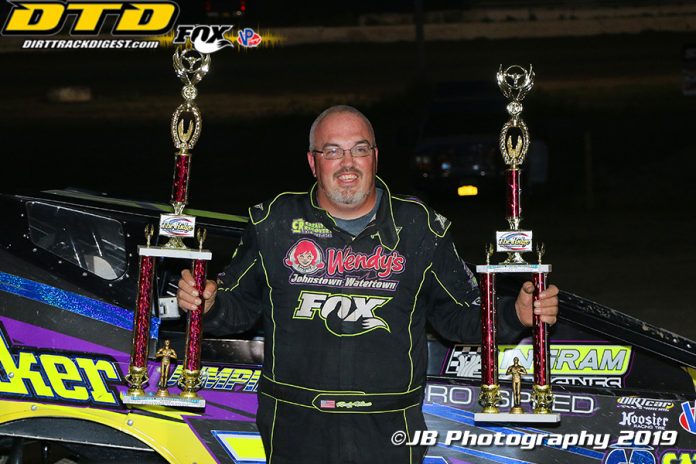 By MATT NOLES
FULTONVILLE, NY- June 9, 2019- Vince Lombardi once said that perfection is not attainable, but if you chase perfection, you can catch excellence.

When the Palmer’s Service Center Modified division returned to the Glen Ridge Motorsports Park for the first time in 2019, Gloversville, N.Y. native Rocky Warner knew he was presented with an opportunity to head to victory lane in not one, but two separate divisions on Sunday night.

It was an opportunity that the driver of the Jake Spraker owned No. 1J didn’t squander.
Warner was perfect in every sense as he easily dusted the competition in both the 35-lap Modified feature and the 30-lap crate Modified feature. What was more impressive is the manner in which he accomplished both tasks leading all laps in each of the night’s main events to top off a perfect outing for the ‘Flying Squirrel.’

In the Modified portion of the evening, Warner took the lead from the drop of the green flag and never looked back even with numerous restarts that placed multi-time track champion Bobby Varin in the infamous Alton and Carole Palmer owned No. 76 alongside. When the checkers flew, Warner crossed the line by more than a straightaway over Varin, Mike Maresca, Randy Green and Jackie Brown Jr. to round out the top-five.


“Having a good draw was huge tonight,” stated Warner after the Modified feature. “Actually, I think just being in the first heat race was huge as well. We started up front and got to the bottom lane and won our heat and that put us on the pole for the feature. I think that was really important with daytime racing and it being hot out and the sun being out all day. The track was actually in really good shape all things considered in my opinion.”

There are always two sides to starting on the front row for any feature event in any division. The track position is obviously key and needs no further explanation. However, the downside in the equation is such that when you’re starting on the front row, there’s only one direction to go; backwards. For all intents and purposes, that was a worry that Warner certainly didn’t have to give much credence to; at least for the most part.

“I was using the sun to my advantage a little,” Warner continued with a chuckle. “I was watching the shadows to make sure Bobby [Varin] wasn’t coming. Starting position made that win look a little easier than it was because these guys are tough; the Modified division is the best of the best and we got lucky tonight.”

Racing can be as mentally taxing as it is physically. Though the physical aspect is rather self-explanatory, the mental, on the other hand, can be just as exhausting especially when one finds themselves in the lead with little to no challenges coming. Until a caution comes out and the unpleasant reality of who is chasing you becomes rather apparent.

“He [Varin] was playing games a little under caution,” Warner said. “But there are only a few Teo’s in the field and only one with a white body so I was watching for him. I kept looking over and seeing his bumper there but I didn’t think his Hoosier’s would have as much bite as the American Racer’s we were running so I figured if we could out-drag him into turn one, we’d be alright.”

For most drivers, the ability to get everything out of their cars comes down to one factor and one factor only; a comfortable feeling behind the wheel. The No. 1J looked every bit the part on Sunday as whatever Warner asked of it, it did with little to no issue.

“Honestly the car was really comfortable to drive,” he remarked. “We tried a few adjustments to tighten it up before hotlaps and we tightened it up a bit too much. We took those adjustments back out and freed the car up and it was a rocket. It was very drivable and both our Teo Pro cars have been really good. I have a lot of good help and good equipment and we’re rolling.”

Rolling is an understatement. Since the racing weekend kicked off on Friday night, Warner has finished no worse than sixth with three top-fives and a victory in four feature events between three different facilities behind the wheel of his Modified. His rookie year in 2018 may have taken a few months to garner momentum but his 2019 efforts have been stellar heading towards the mid-point of the season.

“Last season was a bit tough,” continued Warner. “We won the first Modified race they had here last year and none of the others. Hopefully that doesn’t happen this year. Hopefully we can keep it rolling and have some good runs.”

In the nightcap, Warner again dominated the competition going wire-to-wire in the 30-lap crate Modified feature. Though it wouldn’t seem possible to win by a larger margin than his first triumph of the evening, he did just that as he easily led all laps in route to his second victory of the evening at ‘The Ridge’ over Brian Calabrese, Andrew Buff, Joe Orlando and Chad Edwards to round out the top-five.

“The biggest thing about running the Modified first was knowing that the bottom of the speedway was so good,” Warner explained after his crate Modified win Sunday night. “We actually made the same adjustments to the sportsman that we did with the Modified and it worked a lot better in this car honestly. I felt really good in the feature and it’s the best this car has felt yet this year. Hopefully we’re onto something.”

There aren’t many opportunities for one driver to sweep two different divisions in the same evening. As rare as those chances are, it’s seemingly far rarer to find a driver who has completed the task more than once. Warner is now in scarce company where that statement is concerned.
“This is actually the second time in my career that we’ve won in two different divisions in one night,” concluded Warner. “We did it on W.M. Larned night at Fonda one year. It was my first time running a sportsman and we started ninth and won with it and then we went out and won the pro-stock feature. This is the first time I’ve done it with a Modified and something else and obviously the Modified wins are harder to come by so this is a pretty cool deal for me.”