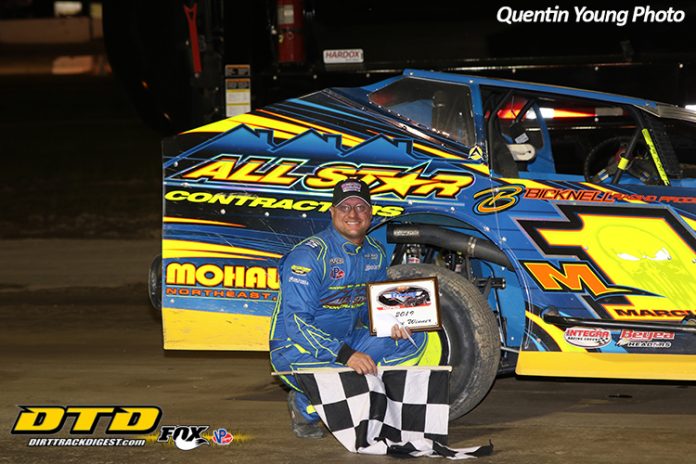 Whenever Dave Marcuccilli hit the race track with his Sportsman he was a one of the picks to win.

He was simply dominant with his M1.

However, 2019 saw a big change as he not only is driving the All Star Contractors 358 Sportsman, but Mike Payne’s big-block in Super DIRTcar Series events and select shows in Central New York.

It has been a rocky start for Marcuccilli, but after finishing sixth in the Utica-Rome opener then ninth and tenth in his first two outings at Fulton before having motor problems in week three which forced him into Mike Fowler’s Sportsman to continue his chase for points the good luck finally arrived this past Saturday night.


Marcucilli started fifth in the 35-lap Fulton feature event and ran away for his first 358 feature win.

Those first weeks at Fulton didn’t help Dave as he said, “This is a humbling sport. We struggled in a couple of races and I always like to think I can win, but we were not good enough to keep up. We just didn’t have the speed and were having trouble knowing how to find it. We just had to pick ourselves up.”

Marcuccilli explained his approach by noting, “We wanted to move up, be competitive and with a little luck get a win. Winning at Fulton the car was just very, very good and I just wanted to drive it like I was supposed to. I knew it would be tough and it might take a long time to win, but you just have to be competitive if you want to win.”

At Fulton, entering the feature, he said, “I just wanted to make sure Ronnie Davis didn’t get past me. I figured once he did he would win.”

He said he couldn’t have done this alone and without help could not have made the step up.

And he received help from one of the least expected places…from someone he never met.

Dave explained, “There are two brothers and after I won the second Oswego race the one in the Watertown area put me in contact with his brother who lives in Nashville. Troy Fleming had raced before, but was interested in helping someone move up. We hooked up after the second Oswego win and that is how All Star Contractors got on the car. He has bought me a couple of motors and I couldn’t have done this without him.”

Although All Star Contractors is his major sponsor he noted he couldn’t continue to do this without the support from Donnath Motor Worx, Bicknell Racing Products, Mohawk Northeast, Beyea Headers, Dig Race Products and Stormin’

After winning at Fulton he said, “I guess now this has raised expectations and I just want to be competitive consistently. I know there will be nights we struggle, but there are up and downs and definitely the highs are higher than the lows.

Family and crew surrounded the car and when he climbed out the smile on his face seemed to show the weight of an 800 pound gorilla had been lifted off his shoulders.

He was emotional…chocked up, but joyous that this moment finally came.