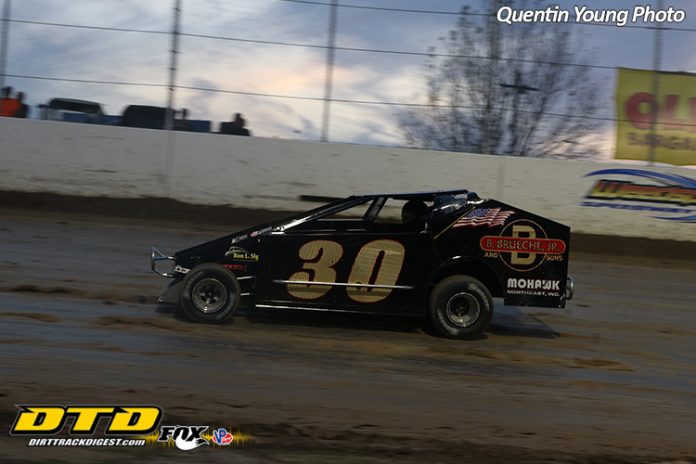 Every so often there is someone who just wants to try something different.

On Sunday night there was just one of those moments in the Modified pits at the Weedsport Speedway.

If you walked through the pit gate and made a quick left at the big-block parking area just a short way down on your left was a black number 30.

No one had seen this car before and there was a reason…it was spanking brand new.


The trio of Bruce Brueche, Mike Sanchelli and Gary Tomkins had finally come together.

Standing at the back of the trailer prior to hot laps Gary said, “Mike Sanchelli, who is pit steward at Orange County, and I have known one another for a long time. He said he always wanted to build a car and have me drive it. He called on Tuesday, said the car was built and here we are.”

Sanchelli said, “Bruce is the owner and I am the principle. Gary and I go back 20 years and I always have wanted him to drive for me.”

This car is significantly different from the other 20 plus big-block and small-blocks in the pits.

Mike explained, “It’s a four bar and it steers from the right instead of the left. It is built to be driven and not drive you. There are just too many cookie cutter cars and we wanted to do something different. Bruce has the Ferraiuolo stuff and we tried some different things.”

The car did have one test run as Mike said, “Billy Pauch took it out for a shake down for us.“

Sanchelli, known as “Suitcase” for his years on the road with the DIRT organization, was always a high profile, outgoing type of guy. However, those days it was work.

Today he said, “I’m retired and work as race director at Orange County working for Halmar. I want to go out and have fun.”

The car entitled “The Inheritance” has a Bruneau motor and sponsorship on the side from Art’s Radiator and GME.

Well, there was no Hollywood ending for this as Tomkins saw the car get loose on the last lap of warm ups and looped it between three and four. Dave Marcuccilli and Larry Wight saw their cars gets dinged up.

Upon arriving in the pits Gary jumped from the cockpit, the crew went back to work sliding under the rear end and the driver headed to apologize to Dave and Larry. He went so far to find Wight as Larry wasn’t at his hauler, but sitting in the staging area awaiting the start of his Sprint car heat. However, Gary found him, stuck his head in the cockpit and apologized.

Tomkins indicated the car needed a bit more tuning and that “I am going to start in the back of my races tonight.”

After nearly 20 years of hoping that they would get together it would have been great to see some sort of success, but I guess if there was success it was that they finally got together as a race team.