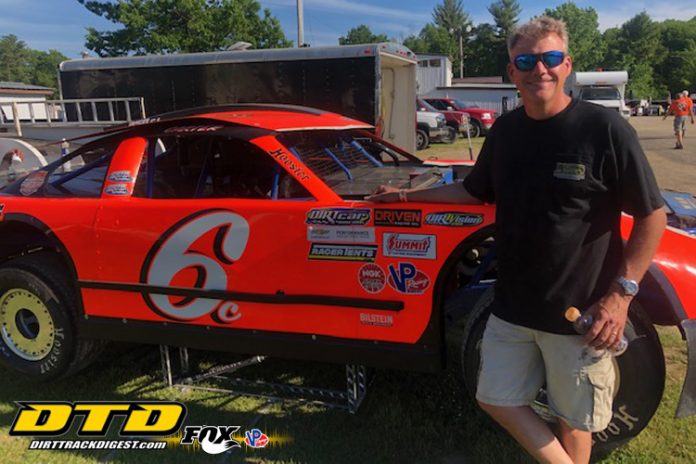 Finally we have made it to June and the weather people were calling for four days in the 80’s.  Friday evening looked to be a beautiful night and as always we were at our Friday night stop, Albany-Saratoga.  The parking lot was over half full around five and that’s a good sign when school is still in session.

On the way into the track we spoke with a first timer to the track, Brian Carter, CEO of WRG (World Racing Group) who was at Malta to run his Pro Stock.  Making the trip from North Carolina, Brian said,  “I’m here to have a good time and do a little racing.”  He said he’s only been in his car three or four times and as the night progressed he learned a lot about adjustments for track conditions and met and talked with many of the drivers that were in competition on Friday at the Great Race Place.  After his first trip out on the track he came back saying the car was very tight and after making some adjustments, it ended up too loose for the changing track conditions.  As the end of the night he said he accomplished what he set out to do, have a good time and the car was still in one piece.  Brian planned to try his hand at the high banks of Lebanon Valley on Saturday.  Reports are that he blew a motor. No matter what track we attend the one sure thing is the young fans love driver meet and greets, kiddie rides and bike giveaways.  There were some 43 donated bikes to be given away and as the kids entered the speedway they were given a ticket to place in a  bag attached to the bike they wanted.  After the drawings we spoke with one happy winner, six year old Shawn Briggs, Jr., standing proudly with his new bike and the driver that donated it, Marty Kelly, III.  Kelly also donated a helmet and racing tee shirt and hat to the winner.  Friday was Shawn’s fifth time at the track; he has two relatives racing, Dan Grignon in the No. 42G Limited Sportsman and Darryl Nutting in the No. 42 Sportsman.  We believe many happy kids went home at nights end.

We stopped by Brett Hearn’s pit area to get the real answer about the track conditions at Orange County.  With over 300 victories at OCFS alone we thought he should certainly have some input.  Brett said that Jeremie Corcoran had done what he could to improve the track but now they would have to wait for the new surface in July.  Brett did mention that the annual Nostalgia Night was a hit.


It was emotional win for Robert Bublak in the No. 27B Sportsman on Friday.  Robert and his wife recently learned they that the due date for their first child will be on his late father’s birthday.  While we were talking with Robert he said he is very grateful to his car owners, Mike and Tony Ballestero and all they do for him.

With his win on Friday, Peter Britten, now has two wins this season at Malta putting him in the top twenty on the all time win list with 10 wins. We arrived at Fonda late on Saturday because we were at Proctor’s Theater in Schenectady for our granddaughter Lila’s recital. When you arrive late at anything you depend on those around you to recap what you missed.  Our friends in the announcer tower did a great job of that telling us there had been a lot of action that included several flips on the track.  Good news was that no one was hurt.  The first race we saw was the first of the twin 20 Modified events.  Stewart Friesen was in the house and took control of the event when he was able to get by Josh Hohenforst who was the early leader.   Later in the night Danny Varin was the man to beat in the second twin 20 event with Rocky Warner showing his racing talent has improved immensely since his days in the Street Stock division.  All in all the racing at Fonda this season has been some of the best we’ve seen in a long time and in talking with fans each week, many seem to agree.  They are also talking about the weekly 50/50 drawings.  One other note, yes, Ric Lucia was at Fonda helping with track prep on Saturday and he will be there whenever his schedule allows. Saturday was announcer Paul Szmal’s birthday and his wife Laura brought some delicious cupcakes, placed in the shape of a checkered flag, to celebrate.  Paul is one of the veteran race announcers we’ve heard at many venues over the years.  He has been in the business for 33 years and on the radio in the Geneva area for 31.  “I guess I’m too stubborn to quit,” said Paul, as he stood in the tower at Fonda doing what he loves.  He’s worked for four different promoters at the Track of Champions.  He first came to Fonda for Ralph Compani and then returned under Ric Lucia, Pete Demitraszek and now Brett Deyo.  “I’m blessed, said Paul, I do the two things I love and make a living at it.”  He travels 120 miles to Fonda each week and then spends the night and moves on to his Sunday night venue, Glen Ridge.  Paul has a partner in the tower at both Fonda and Glen Ridge.  Jay Severson sits alongside the “Cowboy” each week at both tracks.  Jay began announcing ten years ago at BMX and Kart events when his son raced and they traveled from Northern Virginia to New Hampshire.  Jay’s career also includes racing in the Street Stock division at Malta after Lyle Devore put the clay down over the asphalt.  Paul and Jay are a great fit and both seem to enjoy what they do. Jim Becker finally started his season on Sunday at The Ridge, the latest he’s ever started in 25 years of racing, according to Jim. Jim posted a top ten finish in the Modified feature his first night out.  It was also kids night at Glen Ridge on Sunday and donated bikes and backpacks were given away.  One driver you can always count on to donate is Cliff Haslun and his beautiful girls bike was won by six year old, Alexandria Cosselman.  Cliff was also the winner of the Street Stock feature on Sunday.  Ed always finds it worthwhile to go to Glen Ridge and on Sunday it was worth $360 from the 50/50 thanks to Julie Compani the sole ticket seller.