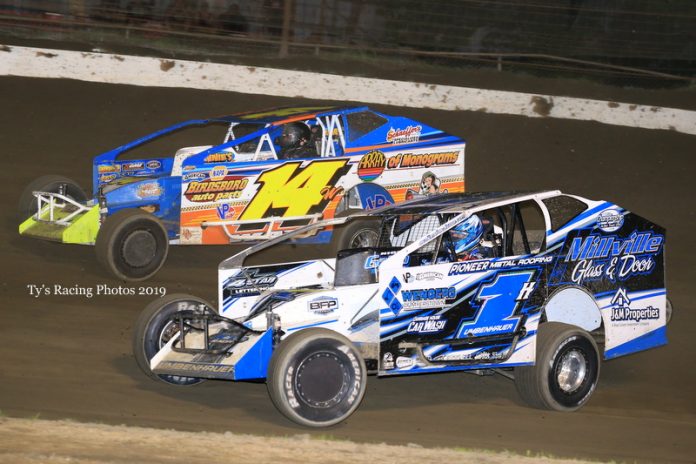 Ringoes, NJ’s Ryan Godown led the NASCAR 358 Modified field to the drop of the green flag with Watt quickly moving into the second spot. Godown set the pace, but Watt closed quickly, stalking the leader and waiting patiently to make a move for the top spot.

The only yellow of the event flew on lap 10, as the leader, Ryan Godown slowed entering turn 3 handing the lead over to Watt.

On the restart, Craig Von Dohren charged inside the leader, with Duane Howard close on his tail – but neither could complete the pass on Watt. Howard moved passed VonDohren a few laps later, setting his sights on the leader.

The leaders approached lapped traffic on the 20th circuit closing the gap and allowing Howard to challenge for the win. Howard’s No. 357 machine moved inside Watt’s, showing the nose but unable to complete the pass.


The pair raced down the backstretch side-by-side as the checkered flag approached. The battle for the lead shaped up, but Watt gained an advantage while Howard struggled with a noticeable right rear flat tire. Watt would roll on for the victory, Howard held on for the second position, Craig VonDohren finished in third, Jared Umbenhauer in fourth, and Brett Kressley rounding out the top five finishers.

The NAPA Auto Parts Thunder on the Hill Racing Series returns on Tuesday, July 2 for Pennsylvania Sprint Car Speedweek with $10,000 to win for the 410 Sprint Cars – also on the card, the NASCAR 358 Modifieds. NASCAR competitor Kyle Larson has picked up the victory in the past two Grandview Speedway Speedweek events.

The USAC National Midget Championship comes to Grandview Speedway on Tuesday, July 30 alongside the NASCAR 358 Modifieds for the Ken Brenn Midget Masters event.