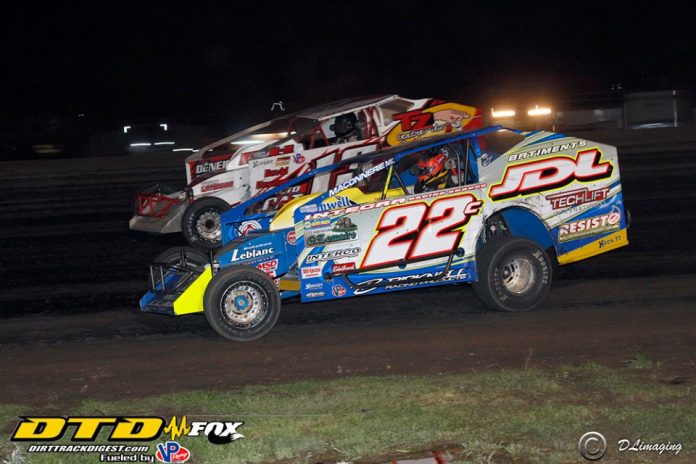 The 2019 DIRTcar 358-Modified Series will get underway in just under two weeks with a series doubleheader. The first of two nights of racing at the Can-Am Speedway on Wednesday, June 26, followed by Fulton Speedway on Thursday, June 27.

The series of 12 races, which will determine the 2019 358 champion, has already caught the attention of some of the best drivers in the Northeast and with a doubleheader to start of the series will entice drivers on getting good results at both venues.

Larry Wight, the defending series champion, is anticipating making the short drive up to Can-Am if plans work out but will defiantly be at Fulton on June 27. Wight confirmed that the 99 Gypsum team will be concentrating on the Super DIRTcar Series title this season, but will make some of the closer 358 series events when time permits.

Yan Bussiere from Drummondville, Que., will be at Can-Am for the 358 series opener and plans to race Fulton the following night. Yan who has had some great success this season plans to challenge for the 358 Modified series championship if possible but did confirm, as other drivers have, that some of the races will conflict with other commitments. Yan will definitely be one of the contenders to watch in 2019 if he can make most of the series events. Mat Williamson confirmed that the No. 6 team would be racing Can-Am on June 26 as well as Fulton the following night. Williamson, one of the up and coming young hard chargers who has really made his presence known in the past few years, will race as many of the series events possible, but like others, he too will miss some events due to other commitments.

Erick Rudolph from Ransomville, N.Y., who is coming off his impressive win at the Weedsport Speedway’s “Heroes Remembered 100” a few weeks ago, has also confirmed that he will be racing the 358 series race at Can-Am on the June 26 and also the following night at Fulton. Erick will race as many of the series events possible, but there will be choices to be made, as there are some conflicts with other commitments.

Chris Raabe, who has won this series in the past, has also confirmed that the 01 team will make the trip to the legendary ½-mile dirt oval at LaFargeville. Raabe, the 2009 Sportsman champion at Can-Am, knows the track well and will surely show his presence on the track. However, as many of the other drivers, Raabe is uncommitted to running the entire series at this time. Former Can-Am track champion in both Sportsman and 358 Modified classes, Lance Willix will be on hand for the 358 series opener and at Fulton the following night. Lance, who lives a stone throw away from Can-Am, has raced at the LaFargeville track for 30 years and knows this track well. A small team, which is always in the thick of things, Lance is definitely a hard charger and can show up against the best of them and will be one to watch over the series.

As Lance explained: “It will be a long season and there are a lot of good drivers out there like Chris Raabe or Steve Bernier, which will not make things easy.”

Multi-time series champion Steve Bernard will be racing the first of twelve races at Can-Am Speedway, and possibly Fulton on June 27. The team, however, will see how things unfold during the first few 358 series before deciding to carry on with all 12 races.

Tim Sears Jr., has confirmed his plan is to race the entire series, starting off with Can-Am Speedway on June 26, followed by the second series race at Fulton Speedway on June 27. Sears, who finished sixth in the point’s battle last season, is looking to better than that and possibly take home the title.

Ryan Arbuthnot will be racing Can-Am and Fulton.  He said, “We plan to follow the 358 series at least for the first few races and see how things go. We will also be racing Fulton the following night. If things play out well for us, we will continue on and race the entire series.”

The number 70 team, who races Can-Am on a weekly basis along with Brockville Speedway, has picked up two wins so far this season and will be another driver to watch as the series unfolds. Michael Parent, from Granby, Que., has stated that the number 25 team will be at the series race at the Can-Am Speedway and plan on racing Fulton the following night. The team will see how things go from there in the before deciding on the rest of the series. Parent, always a hard charger, will definitely be a player at Can-Am, and Fulton coming off a weekend of three podium finishes, including a win at Le RPM Speedway. Additional drivers like Jordan McCreadie, Carey Terrance, Mario Clair, Gary Lindberg and Corey Wheeler could also be key factors in deciding this year’s champion. All in all, fans will be treated to some great racing as teams challenge for the title over the next few months, which will conclude at the Brockville Speedways Fall Nationals in October.

So the stage is set for June 26 at Can-Am Speedway along with June 27 at Fulton for the 358 series doubleheader. These being the first two races of the twelve race series will entice driver too races hard as possible to walk away with a one-two punch in the points battle, giving fans a chance to see who will come out with a leading adage in the series.