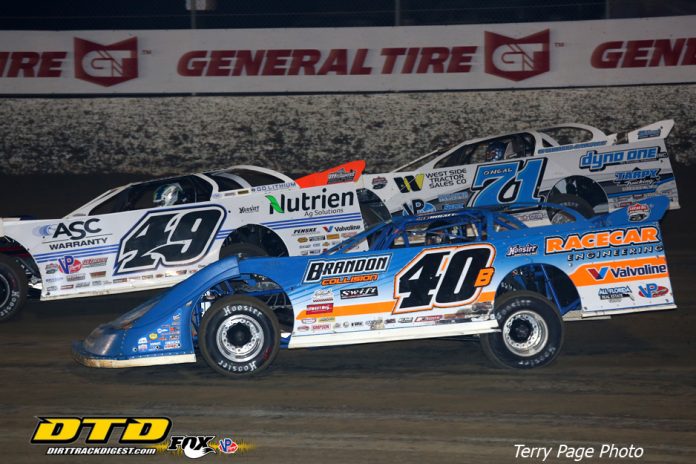 FAYETTEVILLE, NC – Kyle Bronson battled to re-take the lead from Brandon Overton on lap 44 and then cruised to his second career Lucas Oil Late Model Dirt Series victory on Thursday night at Fayetteville Motor Speedway.
With the win, Bronson becomes the tenth different winner this season on the tour. A healthy crowd was on hand for the Dunn-Benson Ford Wayne Gray Sr. Memorial – presented by GETSCO.
Trailing Bronson and Overton across the finish line were Tyler Erb, Hudson O’Neal, and Jonathan Davenport. Bronson is also the fifth different winner in the five appearances by Lucas Oil Late Model Dirt Series at Fayetteville.
Erb led the first twelve laps of the race until Davenport forged ahead on the thirteenth circuit. Davenport held the lead over Bronson until lap 31 when Bronson took over the point. Overton led one lap until Bronson raced back around him for good with six laps remaining.
It was a big week for Bronson as he celebrated his 29th birthday on Tuesday and picked up the victory in his first-ever appearance at Fayetteville. “I have had a really good car the last few months, but we don’t have the results to show for it. With all the bad luck we have had, we showed how fast of a car we have tonight. I let JD [Davenport] get the lead and I was kicking myself about how I let him by.”
“It was a fun track to drive on, it had some character,” Bronson added. “I have to give a big thanks to Mark Richards, he has helped me so much. We stay at Bob Pierce’s shop when we are out on the road. This is the first time we have gotten to come here because we got rained out here last year. We have a fast race car and I knew our time was going to come to get another win. Hopefully we can ride this wave out a little longer.”
Overton in the Rum Rummer Racing, Rocket Chassis finished second as he and his team were competing with heavy hearts after the passing of crew member Billy Vacek. “It’s been a tough week with Billy’s passing. I am going to try so hard like I did tonight to get a win for him this weekend. Our hats are off to Kyle for the win. I led a lap and then he got back around me. He [Bronson] did a really good job. I really wanted to get that win for Billy. I guarantee you the fans got their money’s worth tonight. I am looking forward to Cherokee tomorrow night.”
Erb continued a string of impressive runs with his third-place finish. “We got the lead early, but the more the race went on, the crazier it got. Kyle did a good job, especially on the restarts. I think we were about three-wide for a second. We finished and I don’t know how. We have two more nights of racing so we have to work on it some more to get this car better. Congrats to Kyle, he is one of my best buddies, we travel up and down the road together and I am really happy for him.”
The winner’s Rocket Chassis is powered by a Durham Racing Engine and sponsored by: Brandon Ford, Brandon Collision, Race Car Engineering, Keyser, VP Fuels , Integra Shocks, Valvoline, and All-Florida Real Estate Group.
Completing the top ten were Josh Richards, Devin Moran, Dustin Mitchell, Jimmy Owens, and Michael Brown.
Lucas Oil Late Model Dirt Series
Race Summary
Thursday, June 13, 2019
Dunn Benson Ford Wayne Gray Sr. Memorial presented by GETSCO
Fayetteville Motor Speedway – Fayetteville, N.C.