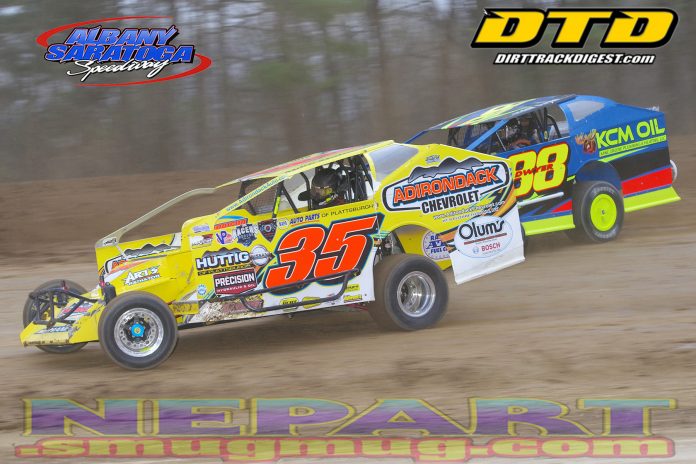 MALTA, NY –The new kid on the block is now a feature winner at Albany-Saratoga Speedway.

Second-generation driver Mike Mahaney of King Ferry, who opted to race at the historic Malta track on Friday nights this year when he landed a ride in the George Huttig-owned modified, overcame a late restart to record his first career win in the 35-lap feature Friday night.

While Mahaney is a newcomer to victory lane at Albany-Saratoga Speedway, the Adirondack Auto No. 35 isn’t, as Mike Perrotte drove Huttig’s car to 18 career wins at the track from 1986-2012.

While Mahaney got the win Friday night, he was quick to give an assist to Skip Seymour. Two weeks ago, Mahaney blew the motor in the Huttig ride during hot laps, and the engine that took him to victory Friday night was one he borrowed from Seymour, who prepared cars for Mahaney at Utica-Rome Speedway in the past.

Mahaney, who started seventh in the 26-car field, got involved quickly and went around the outside of Rich Ronca coming out of the second turn to take over second on lap 11. But he then dove back to the bottom, where the Huttiig car was really hooked up.


Mahaney then took the lead away from Don Mattison on lap 19, again using the inside lane coming out of the second turn, and for a while, it looked like the race was over.

With no cautions, Mahaney opened up a large lead on Mattison and easily worked his way through lapped traffic. Then, ironically, lapped traffic almost cost Mahaney the win, even though he wasn’t directly involved.

Bobby Hackel IV, who had started right next to Mahaney and who had been running in the top five since early in the race, moved into the No. 2 spot in the Killer Crate No. 97 on lap 24, and slowly closed the gap on Mahaney.

With five laps to go, Mahaney came up on the lapped car of Jack Lehner, and it looked like that might have been the break Hackel needed. But Mahaney easily cleared Lehner, and just as quickly, Matt DeLorenzo rocketed up on the outside of Hackel, trapped Hackel behind Lehner and passed Hackel for second. An instant later, Hackel banged into the rear of Lehner’s car, Lehner spun and Hackel wound up on the infield, bringing out the only caution of the feature.

The field lined up double file, and Mahaney chose the inside, putting DeLorenzo on top, where he had been making his best moves. But before the lap was completed, Jackie Brown Jr. and Elmo Reckner tangled in the second turn, bringing out another caution, Per track rules, the next restart was single file, which gave the advantage back to Mahaney, and he hung on for the win.

“On that last caution, I was not a happy camper,” said Mahaney after the victory. “I knew I had a big lead, and I knew I had a good handling car, but I was worried that someone would get up and get around me. The double file restart might have given me some problems, but when we went to single file, it gave me the room I needed.”

DeLorenzo, who started 12th and ate up a ton of ground on the outside late in the race, wasn’t sure if he could have caught and passed Mahaney in the final two laps.

“After the caution, my car got a little tight, but it would have been close,” he said with a smile.

Keith Flach finished a close third, bringing out his backup car after flipping his primary ride during his heat race. Ronnie Johnson crossed the finish line fourth, and Brett Hearn was fifth.

Tim Hartman Jr. recorded his first win of the year in a wild finish in the 20-lap sportsman feature. Jack Speshock led most of the race, but when he got into lapped traffic, Hartman rode the cushion and quickly started to challenge the leader. Going into the third turn on the last lap, Speshock and Hartman sandwiched the lapped car of Brian Calabrese, with Speshock low and Hartman high. They came out of the fourth turn side-by-side, made contact and came across the finish line in a photo finish. Electronic scoring showed Hartman winning by .019 seconds. The finish was so close that Speshock drove into victory lane first, thinking he had won the race.

“I felt like the bottom was a little better, but I saw Jack on the bottom and knew if I wanted to pass him, I was going to have to go to the top,” said Hartman Jr., the defending sportsman champion.

Jay Corbin picked up his first win of the season in the pro-stock feature, Because he started third, he was able to escape a lot of carnage that took place behind him, and ruined the nights of Kim Duell, Josh Coonradt and Brandon Emigh. After taking the lead on the second lap, Corbin was literally unchallenged, and wasn’t hampared by the restarts.

“I definitely needed this,” said Corbin. “We’ve had nothing but [expletive] luck this year.

Al Relyea survived a last-lap challenge from longtime rival Randy Miller to win the 20-lap John Morris Sr. Memorial street stock feature. Relyea was nearly eliminated early in the race, when polesitter Tim McFarland got sideways in the second turn and Relyea drove right into him. But Relyea was able to keep his car pointed straight and to continue, lining up fourth on the restart, and took the lead on lap 13.

Miller worked Relyea over in the final seven laps, trying to find room on both the inside and outside to make a pass. They came out of the fourth turn side-by-side on the final lap and made contact, but Relyea held on for the win.

The Empire Super Sprints were also on the Hoosier Daddy Father’s Day Weekend card, with Jonathan Preston picked up his second victory of the year in the 25-lap feature. Preston slid past pole-sitter and early leader Billy Van Inwegen on lap nine to move out on the point, and that’s where he stayed. Preston led Van Inwegen, Jason Barney and Paulie Colagiovanni across the finish line.

In other action, Mike Furmont picked up his first career win in the Haun Welding limited sportsman feature.

Furmont and Matt Rich, who made up the front row, controlled the first half of the race, but on a restart on lap 10, Rich was hit from behind, setting off a five-car chain reaction incident in the second turn.

When the green flag flew again, Furmont was in charge, pulling away for an easy win, with David Boisclair passing Scott Bennett for second on the final lap.