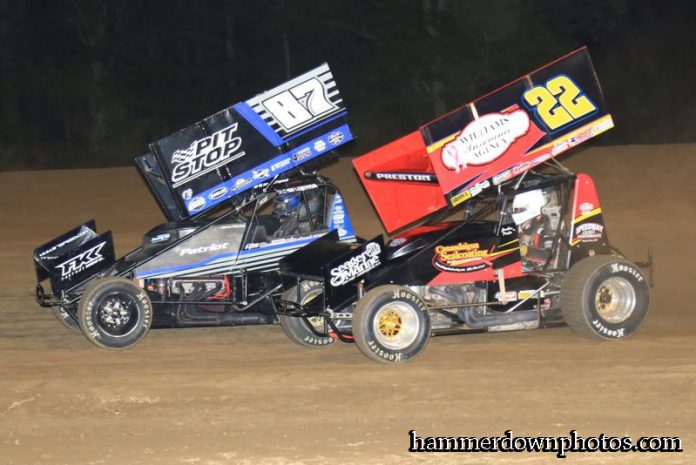 MALTA, NY – It took Jonathan Preston six years of racing to get his first ever Lucas Oil Empire feature victory. Fortunately the Romulus, N.Y., driver didn’t have to wait nearly as long to get his second.

Preston outshined a field of 34 cars on Friday night at the Albany-Saratoga Speedway to score his second win of the 2019 season with the series. His first came back in early May at the Outlaw Speedway.

It was a dominant performance for Preston as once he took the top spot he easily left the field to take home the checkered flag along with the $2,135 winner’s payday.

“This is just incredible,” said an ecstatic Preston after the Mach 1 Chassis/NAPA Auto Parts A-Main. “This is two in one season. I’ve been racing six years now and only have a couple wins total. To have two in one year is incredible.”

Billy VanInwegen was flanked by Jason Barney on the front row for the start of the feature. VanInwegen raced out to the lead with Preston and Barney wrestling for the second spot. Preston was able to take it on lap two.


The race came to a halt on lap three as Cory Sparks spun in turn two. In spinning he collected Denny Peebles, Tyler Cartier, Dale Gosselin and Kelly Hebing. Hebing ended up going over. All five drivers were uninjured in the incident.

Preston now pulled up alongside VanInwegen on restart. VanInwegen won the race off the turn at the green with Preston quickly pulling to his back bumper. Preston hounded VanInwegen for the next few circuits as he continuously pulled up along-side him looking for the lead. Each time VanInwegen had enough.

VanInwegen’s reign at the front came to an end on lap nine as Preston slid up in front of him at the exit of turn two in order to grab the lead.

“I just made a right rear shock change and the thing was glued,” stated Preston. “I could go to the middle or top.”

After disposing of VanInwegen for the lead, Preston was quickly in traffic as the race reached lap 10. He was running the high-side which allowed him to move through traffic at a quick pace. VanInwegen struggled as his car wasn’t where it needed to be handling wise to run the top.

The last caution flag of the race was shown on lap 13 as Mike Kiser spun in the second turn. At this point in the race Preston led VanInwegen, Davie Franek, Jason Barney and Chuck Hebing.

The restart saw a mad scramble for position with Preston having no issues staying at the front of the field with VanInwegen second. Barney ended up taking third with Shawn Donath and Paulie Colagiovanni finding their way into the top five on lap 14.

Preston kept up his pace while opening a large gap on the field. VanInwegen received pressure from Barney while Donath and Colagiovanni swapped the fourth spot numerous times over the next few laps.

Preston’s last challenge began on lap 20 as he encountered the tail of the field once more. He was again able to use his car’s ability on the high-side to his advantage as he cut through the traffic.

“The car was just on rails,” cited Preston. “I had a lot of close calls. I was close to Barney, close to Richardson. I was just lucky. I drove the balls off of it. That’s all she had.”

At the checkered Preston left no doubt as he crossed the line for the win. VanInwegen finished second and afterwards admitted that his car just wasn’t good enough to run the cushion.

“Jonathan was just really good on the cushion and we were a little tight on the cushion,” commented VanInwegen. “We were set up to run off of that and dependent on that. He was a little bit better than us and was able to get by us.”

Barney, of Brewerton, N.Y., mounted a charge on VanInwegen but just wasn’t good enough off the bottom of the speedway to take the spot away.