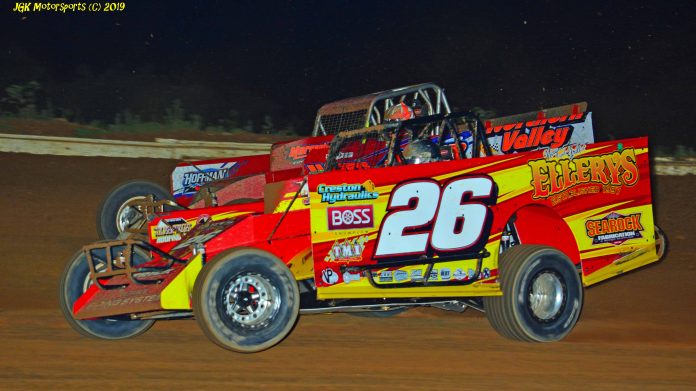 POTTSVILLE, PA – After the huge disappointment last season when Craig Von Dohren passed leader Ryan Godown on a late race restart to win the Topless feature event, the Ringoes, NJ driver was more determined than ever to not let that happen again this year. Godown was on a mission Friday night and when it was all over it was the “Ringoes Rocket” standing in victory lane holding the big $5000 check.

The 40-lap race for the Insigner Performance 358 Modifieds got underway with Kris Graver and Craig Von Dohren leading them to green with Von Dohren grabbing the lead at the start and immediately pulling away from the field as Jared Umbenhauer moved by Graver and into second place. The first yellow of the night occurred on lap two as Matt Stangle and Shawn Fitzpatrick came together in turn four with both able to continue. Von Dohren continued to lead on the restart with Umbenhauer keeping pace.

The yellow flag flew once more on lap nine as defending track champion Duane Howard slowed to stop ending his night. When the race resumed the No. 6 of Stangle was once again facing the wrong way forcing the yellow flag to come out once more before a lap could be completed. When the race resumed Ryan Krachun threw his name into mix as he went past Umbenhauer for second. While this was going on Ryan Godown who had started back in the twelfth spot was starting to work his way towards the top five and made the move of the race going from seventh to third in one swoop when the cars in front of him all pushed up the track in turn three. The last yellow of the race would be put out on lap 15 when Frank Yankowski stopped on the track with a collapsed front end.

The racing picked up dramatically on the restart with Krachun giving Von Dohren all he could handle for the lead as Godown waited patiently behind the two leaders waiting to make a move. Krachun was trying the inside of Von Dohren each and every lap but just couldn’t find enough speed to get by the leader. As the field was bearing down to the halfway mark Krachun changed his strategy and tried going around the outside of Von Dohren in turns three and four. Krachun wasn’t able to make the move work and lost second place as Godown drove underneath him. As the field took the halfway flags it was Von Dohren leading Godown, Krachun, Alex Yankowski and Brett Kressley.

In a role reversal form last year’s topless race it was now Godown who had the task of chasing down the leader Von Dohren. Godown would make his move through turns three and four on the extreme inside and every lap would seem to get an inch a little further up alongside the leader but Von Dohren would always seem to have the momentum coming off the turn to stay in the lead. Finally, on lap 27 Godown made the move stick as he was able to clear Von Dohren just enough coming off turn four to slide up in front and become the new leader.


Once in front Godown would start to charge ahead and put some distance between himself and Von Dohren as the two leaders entered lapped traffic. Godown used the lap cars to his advantage to stretch his lead out even further. Godown would easily take starter Jeff Merkel’s checkered flag to win the big race with Von Dohren taking the second. Krachun would cap off his best run of the season finishing third with Umbenhauer battling back to get fourth and the rookie Alex Yankowski rounding out the top five.

“I knew Von Dohren’s trouble spot was in turns three and four and that was where I had to make my move,” as the winner Godown talked about his winning move. “I knew I could get underneath him, but he had a little bit better momentum off the corner. I knew the only way I would be able to get by is was to run it in there and try to slide job him and take away his lane because that was the only way I knew I had a chance to get by him and break his momentum. Look, Craig is one of the best here if not the best and to be able to pass him like we did tonight says a lot about the speed we had in our car.”

The USS Achey Sportsman feature saw young Brandon Edgar break the three-race win streak of Doug Hendricks and win the 20-lap main event. Jeremy Hertzog took the lead at the start. After a few weeks of some great green flag action, this race seemed to be plagued with cautions. Dylan Smith would be your new leader after the first restart with Hendricks up to sixth already looking for win number four. After another caution on lap three, big Dave Dissinger would take the lead away on the restart with the rookie Edgar now up to second. Dissinger and Edgar would race hard for the lead with Edgar finally taking over the top spot on lap nine with Hendricks also getting by Dissinger to move into second.

The last eleven laps of the race would be slowed two more times with cautions, but Edgar was able to hold off the charges of the veteran Hendricks through it all to take the win. Hendricks would finish second with Craig Whitmoyer, Cole Stangle and Dylan Smith completing the top five.

The Savage 61 Road Runners would be running this night for some extra cash with Savage 61 offering $661 to the winner. Shon Elk steeped up his game with the extra cash on the line to go on and dominate the race leading all 20-laps to take the big win. Elk would take the lead right at the start and never look back. However, while Elk was having his way out front the battle was intense behind him for the runner-up spot. Jim Kost, Chris Holland, and Shawn Mulhall were the principal combatants as the raced side by side throughout the race. But nobody had anything for Elk on this night as he charged to the win over Holland, Kost, Matt Ney and Shaun Mulhall. Kris Ney was the winner of the Cornerstone Auto Sales Cash Dash over Holland, Elk and Kost

The modified heats were won by Kris Graver, Alex Yankowski, and Jared Umbenhauer.

Roadrunner heats were won by Shon Elk and Kris Ney.

Did Not Start – Wayne Witmer