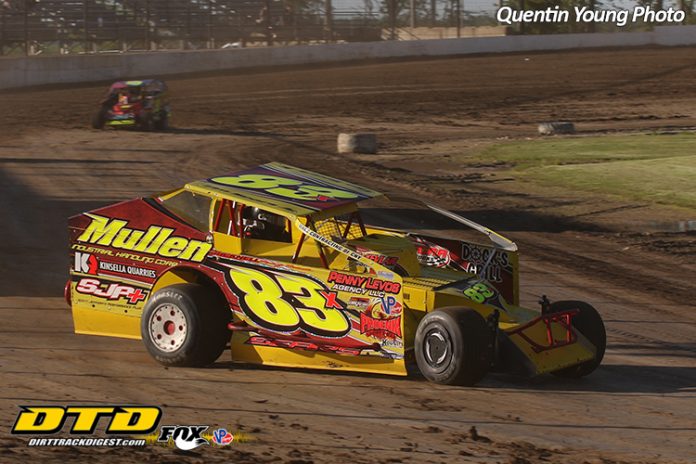 BREWERTON, NY – Tim Sears Jr. made a late-race charge from third to first to score his first Big Block Modified win of the year at Brewerton.

Just like last week, Joe August jumped into the lead at the start of the 35-lap Modified main. A quick yellow on lap four kept him in check, but in those four fast laps, Billy Decker had went from 14th to 7th and Tim Sears Jr. drove from 12th to 6th. On the restart, Tyler Trump sent it to the cushion and drove past August for the lead, especially impressive considering Trump having a 358 combined with the extremely tacky racetrack.

Driving right in Trump’s tire tracks was Andrew Ferguson, like Trump looking for his first Modified win. By halfway, Ferguson was close enough to take a shot at the lead on the bottom, but tucked back in line a couple laps later. Meanwhile, Sears and Decker clawed to third and fourth.

By lap 22, the top four were separated by less than half a straightaway. Decker was working over Sears for third, momentarily grabbing the spot before Sears reclaimed it. Trump and Ferguson continued their high-speed tango on the cushion, but with five laps to go the top four found themselves closer than all race.


With Trump and Ferguson up top, Sears dove low and went to work. In just a couple of turns, Sears drove past both Trump and Ferguson, being scored the leader on lap 32. When the checkered flag fell, it was Tim Sears Jr. taking his first win of the year over Tyler Trump, Andrew Ferguson, Billy Decker, and Matt Hulsizer.

“We’ve been fast all year, just haven’t had the greatest luck,” Sears said. “The track was wide open, and with it going green for so long I knew it would be tough up there the whole time, using the car up running that hard. The closer you start to the front the better, and luckily we were able to get through to the front quick.”