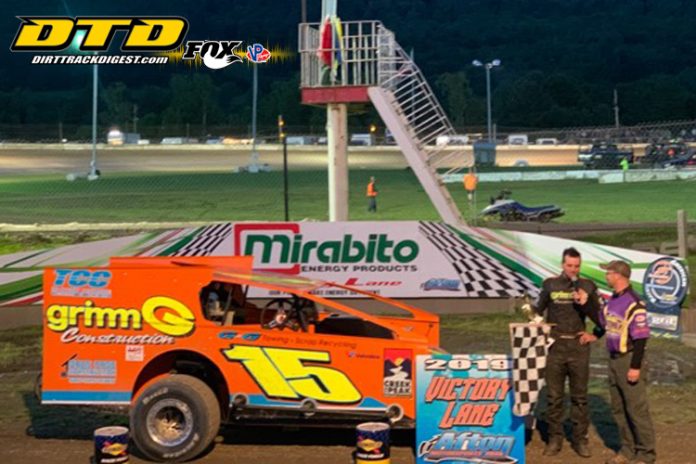 AFTON, NY – Brett Tonkin (15) aboard his Hig Fab, Grimm Construction Modified secured his first feature of the season at the Afton Motorsports Park (A.M.P.) knocking his string of bad luck the past few weeks for a loop. Todd Titus in only his third ever driving appearance at the track took his (9) North Windsor Berries Crate Sportsman to the Mirabito Energy Products victory lane in the special GRIT Series event. Dennis Clapperton (D9) Taggert Electric sponsored Open Sportsman was the first to reach their second feature win in this division for the season. Tyler Stoddard (23) got his win total to three in his potent Bill’s Built IMCA Modified division. Getting their fourth win out of five races were Butch Green (57) in his Powderworth sponsored Street Stock and Ralph Cuozzo (00) R.C. Sales and Service Four Cylinder Truck division.

The ZMK Construction Modified division saw JR Hurlburt (6H) Patriot Masonry Construction and Brett Tonkin bring the sixteen-car field to Scott Stevens green flag. Tonkin got to the front and never looked backed as Hurlburt battled with him the whole way. Tonkin utilizing the bottom of the track and Hurlburt working the top the two battled laps after lap and at one-point Tonkin did have his nose in front but it was short lived. The race was slowed just twice for cautions. The first lap it was for Kailie Demorier (14) Cortland Used Cars for problems in the rear end. A second caution on lap nineteen for a car slowing but got back going. Two-time winner Brandon Walters is starting to put pressure on now and keeps it on to get to third at the finish. The top five at the finish were Tonkin, Hurlburt, Walters, Rusty Smith (34) and Jeremy Smith (46).  Tonkin talked about how hard his crew has been working and was happy to get this one and get the bad karma gone he hopes. The two heats were captured by Rusty Smith and Brett Tonkin.

In the Rinker Insurance Agency Crate 602 Sportsman division on this night had a special as the GRIT Series was in town for a twenty-five lap $1000.00 to win special. It was a draw re-draw event with the top four out of the three heats getting in the re-draw. After the re-draw the front row for the feature consisted of the (123) Dale Welty a Grit regular and also on the outside a Grit follower Corey Cormier (20). Welty took off at the drop of the green and led lap after lap fighting the hard pressure from Cormier working the high side and Todd Titus working the low side. A few times the trio were three wide but every time at the stripe it was Welty in the top spot. Two cautions slowed the pace as the first one was on lap thirteen as Kinser Hill (60x) tested the strength of the front stretch wall and came to rest on the back stretch. At the restart it was Welty, Cormier, Titus, (24) Ryan Macartney and (9K) Blaine Klinger. Under GRIT rules for re-starts it is double-file all the while to the end of the race. As the top three continue to battle after the green came back out Rich Talada (08) and  A.J. Miller (14aj) begin to move forward but not yet to the top five. The final caution came out on lap twenty-two and this is when the complexion of the race took a very drastic change. The caution was for Allan Hodge (5H) who slowed and went to pits after caution came out. The re-start had Welty choosing the inside and coming out of four pushed up the track and Cormier had to move up and Titus hustled on through on the bottom for the lead. Titus moved his groove up a little to try to hold off all challenges and it paid off for his first ever GRIT Series feature win. The top five at the finish was Titus, Welty, Talada, Cormier and A.J. Miller. Titus talked in victory lane about how good it was to get one of these races. He praised God and talked about getting lucky at that restart. He also made thanks to the crew and Dad for the use of some notes. Titus also thanked Dick Stark GRIT Series director and Ron Ford for the track. The three heat winners were Gary Smith (7up) Brandon Loucks (23) and Bobby Flood (91).

The Chamber’s & O’Hara Open Sportsman feature saw Craig Pope (42c) jumped to the lead from his outside front row start over Olin Renwick (5R). Tyler Hart (10x) was first to challenge Pope for the lead but could never get by. Dennis Clapperton starting challenging Hart for second and got by after the half-way mark of the race. Last week’s winner Bill Deckleman is starting to close at this point but comes up short and get third in the quick paced race. On the final lap Clapperton get Pope for the win coming out of turn two and beats him to the stripe. The feature that had one brief caution ran off the twenty-laps in five minutes and thirty seconds. Top five were Clapperton, Pope, Deckleman, Hart and Donnie Hart Jr. (X1). The three heat wins were taken by Brandon Kuhn (16), Pope and Clapperton.

In the Pit Stop Auto Street Stock event had the front row made up of the Bob Crandall (1) and the (160) of Jonathan Fowlston. Crandall grabbed the lead at the drop of the green and Fowlston followed right behind. Caution on lap two for n


newcomer Rich Fife (3K) going around. On the restart Butch Green from his seventh starting spot began a huge charge and snatched the lead from Crandall on lap three. Doug Polhamus (KP1) got to second a few laps later but was never a threat to Green. Lap ten an overheating car of Shawn Stalker (32) was all that slowed the pace of Green and he cruised in for win number four. Green mentioned they made a couple of changes from the heat and feature and said the car speaks for itself. Heat wins went to Steve Polhamus and Green.

The Trophy Guy IMCA Modified feature saw front row starters Gary Roberts (u2) a spot inherited from (7S) Tyler Stumpf electing to start scratch and J.T.Roe (3g). Tyler Stoddard got his third win of the season as he grabbed the lead on lap six from Gary Roberts. The racing behind the top two was good for third through five with positions changing back and forth. Matt Roberts (613) made a serious challenge to get his Dad for second but fell short. Stoddard in victory lane received a bonus from the division sponsor The Trophy Guy and said awesome. Stoddard went high around Roberts but wasn’t sure it would work but it did so he stayed there the rest of the way. The two heats were won by Tyler Stoddard and Beau Ballard.

In the Green Briar Farms Four Cylinder Truck/Car division Dylan Nichols (01) and Jeff Young (17m) occupied the front row. Ralph Cuozzo ran down Nichols at lap six to get the lead and from there cruised to his fourth win in five races in his truck. The only caution was for Jerry Lanfair (75L) braking on lap 10. No heat in Truck as the get to run their feature right after the heats are concluded. Cuozzo said he ran late getting there as he had a late call for his business. He mentioned how well the truck is running right now.

For the first time ever the 607 Wash Pro Wingless Racers Alliance (WRA) made a stop at the speedway. Five of the cars showed for the event Capital Region Sprint Agency (CRSA) regular Thomas Radivoy (1Q) secured the top spot. Three of five finished the twenty-lap feature with Mike Traver (4) eventually dropping out after stalling on lap four. They pushed him but would not stay running. Another CRSA regular and former Modified pilot at the track Dana Wagner tagged the front stretch wall ending his night. In victory lane Thomas said he has raced Sprints for five years and says these are fun. His Dad also mentioned that Thomas saved his life a few years ago as he donated one of his kidneys to him. Great story on the Father’s Day weekend.

A.M.P. Notes; All the racing was on this night was sponsored by the Modified division sponsor ZMK Construction. The race started promptly at seven and the Modified division was completed by 8:52pm. The entire program was done before 10pm. The track continues to get rave reviews from drivers and fans alike. For the second week now the racing groove is from bottom to top and this night it was table top smooth. Upcoming this week all division are on card except the Open Sportsman as a huge fireworks display is on the card. Come early and enjoy the Afton Fair before and after the races. Track Announcer Leon Andrus sent out a Happy Father’s Day from everyone at the track. The weekly track program started back up so make sure you grab a copy and try to win a great prize weekly and don’t forget to vote for your favorite driver.

The order of finish for all divisions are as follows