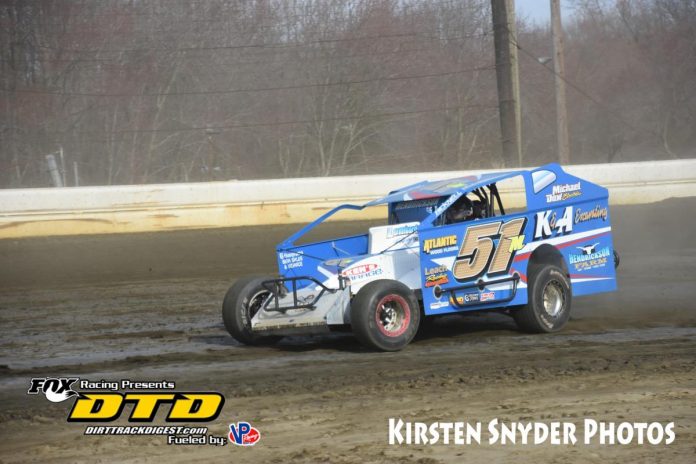 BRIDGEPORT, NJ – Earlier this season, Dominick Buffalino climbed behind the wheel of the Horton No. 76. Week after week, the driver and car showed promise. For the last two races, car and driver were sidelined by mechanical issues.

But all that changed on Saturday night when Buffalino drove Mr. Horton’s No. 76 to Victory Lane in the twenty-five lap Spirit Auto Center Big Block Modified feature event on the Design for Vision/Sunglass Central 3/8th mile track at the Bridgeport Speedway. Buffalino led every lap from his pole position start but multiple cautions kept the field close and the challengers even closer. And Billy Pauch, who finished second to Buffalino, was the one who pointed out that when you win a feature there isn’t a little note that indicates that you won from the pole. A win is a win!

By lap ten, Ryan Watt had his No. 14w in second with Pauch running in third. Two laps later, Pauch took over second and began his challenge for the win but Buffalino was not to be denied as he raced out in front in spite of multiple restarts during the last half of the race.

Buffalino’s last Bridgeport win came in March of 2016 when he won the 60 Over – Doug Hoffman Memorial Race but it was this race on Saturday night that Buffalino declared to be the biggest win of his career. “To win in this car that doesn’t even have a garage,” Buffalino exclaimed. “I can’t thank old man Horton enough!”


Tom Sherby was the winner of the South Jersey Overhead Door 602 Crate Sportsman feature event for his first win of the 2019 season. Sherby was chased to the start/finish line by Wayne Weaver who trailed within striking distance all the way to the checkered flag. Matt Peck held off a determined Eric Kormann to finish third while Kormann won the battle with Travis Hill to finish fourth. Andrew Belmont finished sixth followed by Bobby Bracall, Rich Wegner, Jr., Jim Gallagher, Jr. and Kyle Belmont to complete the top ten.

The fourth annual Pack the House Night comes to the Bridgeport Speedway next Saturday night with FREE admission to the grandstand. Fans will be treated to nine divisions of racing with the 602 Crate Sportsman, Outlaw Stocks, Rookies and Mid Atlantic Sprint Series (MASS) racing on the 5/8th mile track while the 270 and 600 Micro Sprints, Slingshots and 8Cylinder Enduros will compete on the Spirit Speedway quarter mile. Racing gets underway at 6pm, preceded by a Camera and Autograph event from 4-5pm.