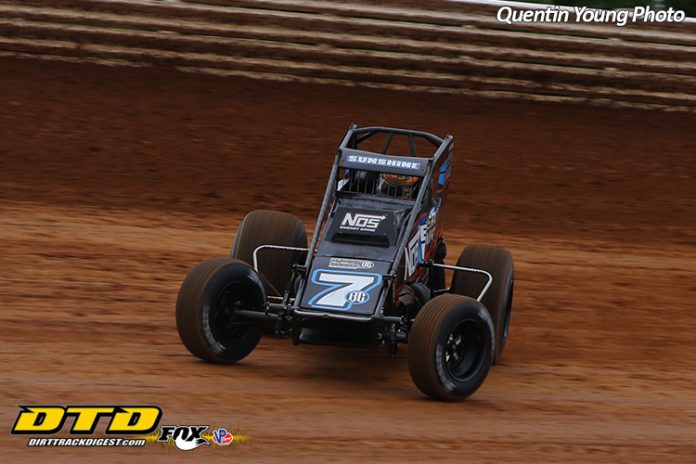 PORT ROYAL, PA –  For Tyler Courtney, the date of June 15th and the location of Port Royal Speedway means more than just another stop on the USAC AMSOIL National Sprint Car tour.

For Port Royal was the half-mile dirt oval where his mentor, Bryan Clauson, recorded his record sixth and final “Eastern Storm” win in 2016.  Saturday night also marked what would’ve been Clauson’s 30th birthday.
Courtney, the defending series champ, was bound and determined to make his own personal mark to honor BC on this night during round three of the 13th annual “Eastern Storm” series but felt there was a spirit helping him along the way.
“We’ve kind of struggled all week,” Courtney admitted.  “But I think we had somebody looking down on us tonight.  This one’s for him.  He’s done a lot for my career.  He’s done a lot for everybody on this team.  Even without him being here, he helped us more than he knows.”
The emotional victory for Courtney aboard his Clauson-Marshall-Newman Racing/NOS Energy Drink – Competition Suspension, Inc./Spike/Rider Chevy appeared as smooth as silk for 30 laps with barely any threats posed en route to his second series victory of the year.  His half-mile record with the series in 2019 now includes wins at Eldora and Port Royal to go along with a 3rd at Terre Haute.