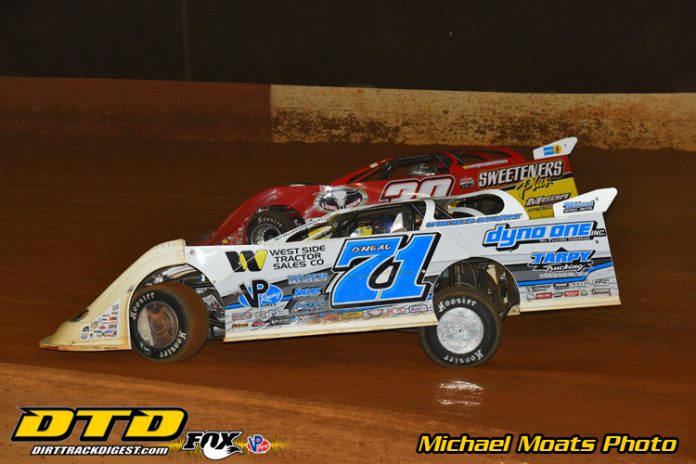 MARYVILLE, TN – Hudson O’Neal wrestled the lead from Mike Marlar on lap 30 and then cruised on to his third Lucas Oil Late Model Dirt Series win of the season on Saturday night at Smoky Mountain Speedway.
The Big Daddy 60 was the biggest paying single-day event in Smoky Mountain Speedway history with a first-place prize of $15,000 up for grabs.
Ricky Weiss crossed the finish line in second, but he was several car lengths behind the winner. Weiss moved by Josh Richards on lap 47, and despite a caution with 11 laps remaining, he was unable to challenge O’Neal for the lead. Richards was third, with Tim McCreadie and Jimmy Owens completing the top five.
Marlar was looking for his third Lucas Oil Late Model Dirt Series win this month as the Tennessee veteran and O’Neal went back and forth for several laps with O’Neal finally gaining the lead for good with 30 laps remaining.
Marlar suffered a left rear flat while running third to O’Neal and Josh Richards which forced a caution flag, ending Marlar’s night as he took his car pit side on lap 36. O’Neal had to wait through a lap 49 caution before he extended his lead back out again over the field. The 18-year-old third-generation racer went on to record his second straight Father’s Day weekend victory. Last year O’Neal scored his first career LOLMDS win by capturing the Clash at the Mag victory in Mississippi.
“Hopefully this makes my dad feel a little better. He has had a rough weekend inside and out of his race car,” said Hudson referring to his father Don, the 2014 series champion. “This one’s for him. He has had such a rough weekend. What a great Father’s Day gift. To do it two years in a row, it doesn’t get any better than that.”
“This car was a rocketship tonight,” O’Neal added. We started out a little slow. I had some concerns earlier in the night, but we made some changes and they went the right way for us. I felt just as good on lap 60 as I did on lap 1. It is not that often you get that kind of race car. We have been up-and-down all year long. We have found something. The cautions went our way tonight. Thanks to everybody for their help.”
Weiss came home with a runner-up finish after falling back as far as eighth. “Our car was little snug at the start. I was actually bottoming out. It seemed to work better the longer we went. We like the longer races. We started forward and then went back and then back to the front. Josh [Richards] and I had a good race for second. I thought I might have had something for Hudson there on that last restart, but I don’t think he missed a mark. Hats off to him for a great race.”
Richards rallied for a podium finish. “Hudson could really hit the brown on the track. We thought we could be pretty good in the race. My nose folded under me a little bit; it was starting to chatter going into three. Ricky was able to get by us. We’ve had a fast car all weekend, but just no luck whatsoever.”
The winner’s Todd and Vickie Burns-owned, Longhorn Chassis is powered by a Clements Racing Engine and sponsored by: Dyno One, Sub-Surface of Indiana, West Side Tractor Sales, O’Neal’s Salvage and Recycling, Tarpy Trucking, VP Race Fuels and Crawford Outdoor.
Completing the top ten were Tyler Erb, Earl Pearson Jr., Kyle Strickler, Dale McDowell, and Jonathan Davenport.
Lucas Oil Late Model Dirt Series
Race Summary
Saturday, June 15, 2019
Big Daddy 60
Smoky Mountain Speedway – Maryville, TN