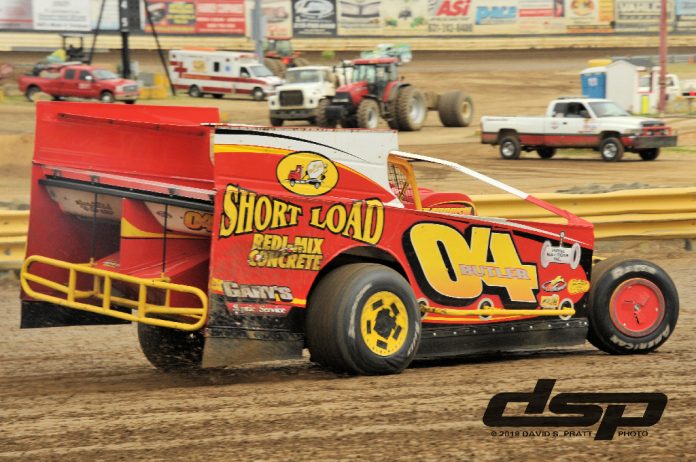 Billy Osmun III led the Vahlco Wheels Modified’s to the green flag and would get out to the early lead. Osmun would lead the first four laps of the 30-lap affair until the first yellow flag flew when PJ Oliver came to a stop in turn number four. Osmun would lead the field back to the green on the ensuing restart but it would be Mike Butler jumping out to the lead clearing Osmun off of turn two. Ryan Krachun would be the man on the move as he charged up to fourth place behind Butler, Osmun and Kevin Vaclavicek.

Butler would continue to lead the way over the course of the next 22 laps when John McClelland came to a stop in turn two. Under the caution for McClelland Ryan Godown went pitside with a left-rear flat tire. On the restart Butler would again jump out to the lead but less than a lap later the yellow flag would come unfurled again when Pat Wall spun off of turn four. Butler again would jump out to the lead following the yellow. Brandon Grosso would enter the top-5 for the first time on lap 27. Butler would take the white flag as the leader but the final caution would wave on lap 29 when Danny Bouc came to a stop on the frontstretch setting up a one-lap dash for the win. Butler would again jump out to the lead and beat Osmun back to the stripe to pick up his first career Modified win. Kevin Vaclavicek, Ryan Krachun and Brandon Grosso would round out the top 5.

“We had some bad luck last week and this is a hell of a way to capitalize on it. It’s been years since I’ve seen Victory Lane. The last thing I wanted to see was caution after caution going for your first win. I can’t thank everyone enough that makes this possible”, said Butler postrace.

Duane Nixon jumped out to the lead during the Larry’s Hot Rods & Harley’s Northeast Wingless Sprint Car feature event and would not look back as he as well picked up his first career victory over Brad Schaale, Kevin Nealls, Eric Degler and Chace Leahy.

New Egypt Speedway is back in action next Saturday night with Graduation Night. In action will be the Vahlco Wheels Modifieds, the Hammer Sportsman, Crate Modifieds, Street Stocks and the Lyons Construction/Metal Fab Rookie Sportsman along with the Garden State Vintage Stock Car Club. We will crown our first champion of 2019 next Saturday night in the Lyons Construction/Metal Fab Rookie Sportsman as they will be graduating into the Crate Modified and Hammer Sportsman divisions. All 2019 graduates will receive free grandstand admission with a copy of their diploma. Pit gates will open at 4pm, grandstand turnstiles will unlock at 5pm with hot laps scheduled for 6pm and racing kicking off at 7pm. Adult (16+) admission will be $20, Seniors (65+) are $18, Teens (12-15) & Military w/ID are $10 while Kids 11 & Under are Free.