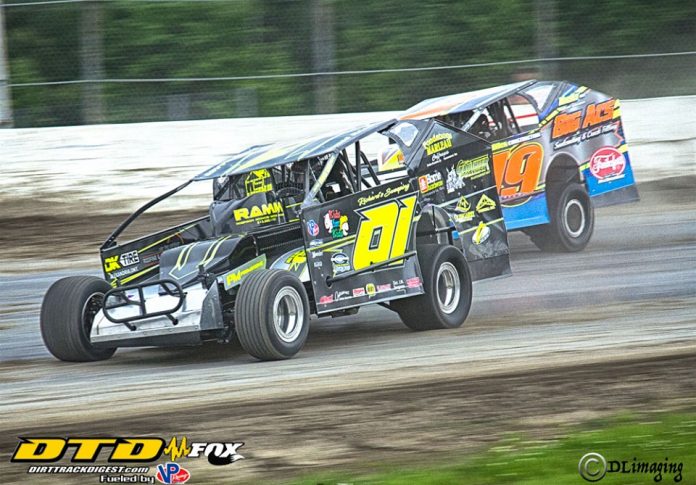 Matt Depew and George Foley traded the lead in the early going of the feature, before Raabe took over just past the halfway point of the 30 lap event.

Raabe got out to a half a straightaway advantage before a caution came out with three laps left to bunch up the field.

Off the restart, Raabe won the drag race to turn one, and held off Gagne to win his first of the year.

Gagne would settle for second, Steve Bernier would come home third, Foley would finish fourth, and Mueller would round out the top five.


For the fourth time in 2019, Corinth, NY campaigner Connor Cleveland made his way to victory lane in the Poirer’s True Value Sportsman division.

It only took Cleveland 14 laps to wrestle the lead away from early race leader Mike Palmer.  He then had the advantage on a number of restarts, holding off Adam Pierson en route to the win.

Shawn Duqette tried to back to back, but just couldn’t get his car to the back bumper to have a shot at the 78.

D.J. Gonyo ran down early race leader Lee Barcomb in the late stages of the Novice Sportsman feature, for his first career win.

Gonyo was back about 15 car lengths, before getting by the Barcomb with a few laps to go.

Nathan Smart would grab the lead early, and hold on to win the Chris Frennier Motorsports Strictly Stocks that was called after 17 laps due to rain.