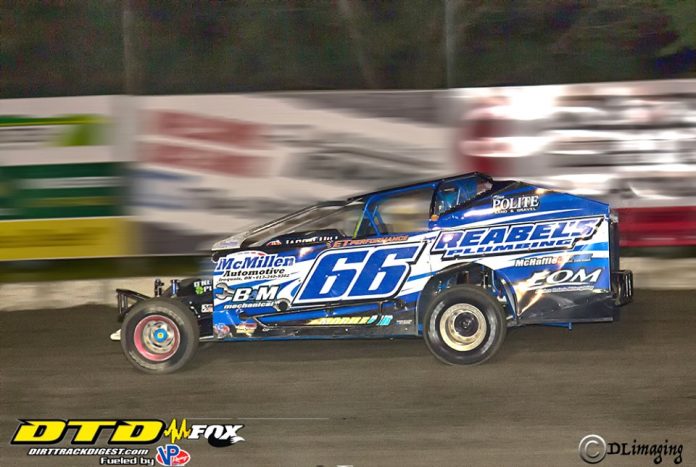 CORNWALL, ON – It was a great night of racing on Pioneer Hi-Bred night at Cornwall Motor Speedway as the Lightning Sprints were in town for their second visit with a full program in all other divisions.

The Loud and Dirty Modified saw Corey Wheeler jumping to the lead in the 30-lap feature event with Kyle Dingwall and Brian McDonald. Wheeler remained in first on lap 3 restart. Wheeler survived to few restarts in the first 7 laps but got passed on these conditions by Dingwall. Yellow was out on lap 17 for Lee Ladouceur. On the restart, Dingwall got challenged by Wheeler but stayed in first with McDonald in third. Dingwall led the final portion of the feature to capture win #1 on the season over Wheeler and McDonald completing the podium.


In the Next Level Home Improvement Sportsman feature, Justin Lalancette moved to the lead over Ryan Stabler and Shane Pecore, Lalancette led the first 6 laps as Stabler had a strong ride was able to pass Lalancette for the lead on the following lap and pulled away from the pack as Kurtis Cayer was in third. Stabler had company with Pecore and Brianna Ladouceur making her way to the front in the final moments of the feature. The final 3 laps were exciting as Pecore was able to move under Stabler for the lead and went on to get his fourth win in a row.

Dave Seguin to the lead in the 20-lap Alexandria Home Hardware Pro-Stock feature with Mike Blais and Rock Aubin following closely. Kevin Fetterly brought caution on lap 7. Seguin had company in Aubin on a lap 11 restart, Aubin used the inside lane to pass Seguin. Marc Lalonde had a strong car and moved up to second and challenged Aubin for the lead, Aubin had some issues and Lalonde was the new leader with 5 laps to go. Lalonde pulled away with Dave Bissonnette moving to second. Lalonde led the final laps to win his first feature of the season.

Francis Laliberté was the early lead in the Lightning Sprints with Jordan Poirier and Mathieu Bardier behind him. The leaders got into lap traffic by lap 10 and Poirier took the lead with Bardier moving up to second, Bardier made a bold move and took the lead at halfway point. Caution was out on lap 15 for Terry Ladouceur. On the restart, Bardier led the way but had issues with his ride and had to let go the lead to Poirier. Pascal Levesque found something on the final laps and took second, but Poirier was strong and kept the lead to win his second feature.

The Assist2Sell Mini-Stock Feature saw JC Bouchard to the early lead over Alexis Charbonneau and Marc Dagenais. Bouchard had company in the lead as Dagenais pulled on the inside and took the lead over Bouchard on lap 5. Yellow was out on lap 8 on the restart, Marc Dagenais stayed first with Justin Jodoin joining the mix in third. Dagenais led the final laps to win his first feature of the season.

Next week is one of our biggest shows of the year as we will celebrate our 50th anniversary with a 50-lap Modified feature counting for the Fat Les Chip Stand Canadian Nationals and paying $5,000 to the winner, the Sportsman will run a 50-lap feature paying $1,000 to win, the Farnham Ale Lager Pro-Stock Series will be in town for 50 laps and the Dany Lefebvre Memorial for Mini-Stock with a 25-lap.