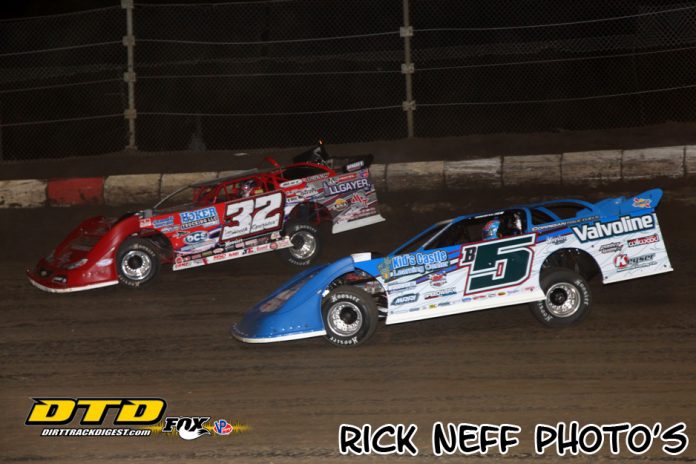 A standing room-only grandstand roared for the Rocket-Shepp as he came back to his home track and took care of business. “To win the DREAM last weekend and to come win in my home crowd in my personal car means the world to me,” said Sheppard in Victory Lane.

Former tour champion Bobby Pierce set the front row of the $5,000 Feature with the legendary Billy Moyer. Pierce jump to the lead by a Jacksonville Speedway straightaway. Moyer, Rusty Schlenk, who turned the fastest lap in Qualifying, and Brandon Sheppard followed until a caution flew for a pile up in turn one involving Moyer and Schlenk. Moyer suffered heavy nose damage sending him to the pits. Schlenk rolled away from the wreck with only minor nose damage.

On the restart Pierce jumped to his healthy straightaway lead again. Defending Summer Nationals Champion Brian Shirley raced his way to third over Sheppard. A caution then flew for a rear bumper in turn two — a turn of events for Schlenk as he suffered a right rear flat tire and chassis damage from running over the bumper. His crew welded the chassis back together and put a fresh new right rear tire in less than two laps of caution, getting Schlenk back on the track.

On the restart  Sheppard lined side-by-side with Shirley behind  Pierce. Shirley lost the battle for second into turn one but fought back. Pierce, on the other hand, didn’t get away as easily as on the other restarts. Sheppard stayed with him.

A long green flag run to the end allowed Pierce to encounter the end of the field. Pierce was five tenths of a second quicker than Sheppard until two lapped cars slowed him down. One lapped car on the top and one lapped car on the middle-allowed Sheppard to crawl under Pierce and snag the lead. They went three-wide into lapped traffic, with Sheppard scoring his 19th Hell Tour victory.

DIRTcar Summer Nationals action continues Thursday, June 20 at Spoon River Speedway in Canton, IL. Follow @summernationals on Twitter and Facebook for the latest news, and be sure to tune into DIRTVision.com to watch every lap LIVE with your DIRTVision Fast Pass, powered by DirtonDirt.