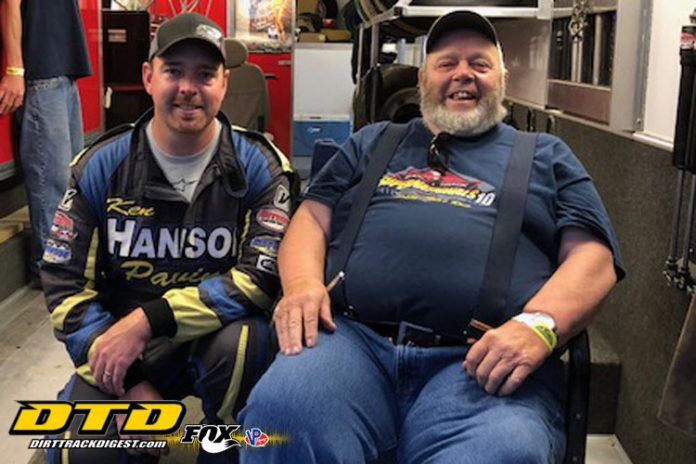 Friday night at Albany Saratoga the National Anthem was sung by Becca Sweet who did a very beautiful version of the Star Spangle Banner. Becca has been going to the races with her father her whole life and Don wasn’t far away; he was in the pits working on the No. 90 sprint car of Matt Tanner. Becca and Don spent their time at the races celebrating Farther’s Day weekend. Next we spotted a familiar father and son team, driver Ron Dwyer and his dad, Bernie. Both were in the stands cheering for the No. 88 Modified driven by Olden, Ron’s son and Bernie’s grandson.

Albany-Saratoga has a cut away DKM chassis on the midway ready for kids and adults to sit in and experience what it’s like to sit behind the wheel. On Friday we ran into five year old, Carter who was at the “great race place” for his second time with his father, Jamie a 30 year race fan from Vermont. The two usually attend Devil’s Bowl on a regular basis but they love to make an occasional trip to Malta. Jamie once raced hobby stocks.

The final feature of the night produced a first time winner in the Limited Sportsman, Mike Formont in the No. 04. Mike has only four to five races under his belt and until Friday his best finish was second. Mike bought the former Jack Johnson car from Alton and Carole Palmer and held onto it while he started his own business and then built a house for him and his wife Regina. Mike said, “I finished the house in March and here I am.” Mike once worked on Jack’s race team. There are many father and son or daughter teams in racing and with the threatening rain on Saturday night at Fonda we dodged the rain drops and found a few. We caught David and Carl Schilling after David had been out for warmups getting his car ready for a run off race against Josh Hohenforst that would decide who would fill the spot in the the Bill Ag match race made vacant because Stewart Friesen was racing with the NASCAR truck series. David and Josh are tied for sixth place in points an impressive showing for being at the track only six to eight times. David began racing karts at the age of six, he’s now 23. He raced Sportsman for five years before moving to Modifieds. “I like Fonda,” said David, it’s tough but I like it”. Allison Ricci was at Fonda on Saturday with her No. 55 Modified. The Ricci name has been in racing for 63 years. It all began with Rich, Sr., (Papa Rich) when he and his brother built a car in the 1950s, took it Rhinebeck Speedway by ferry across the Hudson River and, as they say, the rest is history. Papa Rich recalled one night that the ferry was closed when they arrived after the races and they drove all the way to Poughkeepsie to cross the river bridge there. Needless to say they were very late getting home and his wife was not happy. Worried that something bad had happed to them, she had already called the police. The Ricci family is a true racing family, Mike and Rich, who both have successful careers, rode in the coach race car on the trailer as their father towed it to the races when they were kids. Allison grew up watching her father, Rich, Jr., race at Accord and Lebanon Valley and began her career at 10 years old. She currently races the Halmar No. 55 small block at Orange County and on the STSS and comes to Fonda on the nights Orange County doesn’t have small blocks on the card. We look for the Ricci name to be in racing for many more years.

We did run across a few more father and son teams as the rain persisted at Fonda. Craig Hanson was packing up as the show was called and his father Ken was sitting in the hauler with a big smile on his face despite the rain. The Hanson name has been on the racing roster at Fonda for many, many year. Cody Bleau and his father, Chris, were busy packing up after the rain out too, but we were able to get this shot before they pulled out of the pits. Cody races the Hoyenga owned No. 73 at Fonda and his father is always there busy working on the car each week so his son can race.

The Bill Ag match race never took place because Mother Nature had other plans and race has now been moved to June 29 added to the show with the Hondo Classic and the best news is fans can see both special shows along with regular racing for just $5.00.

The anticipation is building as the special shows begin to show up on the schedules of the local dirt tracks. The first is Brett Hearn’s Big Show 11 this year it’s a 111-lap Super DIRTcar Modified Series event paying $11,111 to win. An outstanding field of cars can be expected at this much anticipated event. Spectator gates open at 4:00 p.m. on Tuesday, June 25.

Coming to Fonda on Wednesday, July 3 is the Fuccillo Automotive Group Firecracker 50 presented by Teo-Pro Car paying $10,000 to win. This is a Bob Hilbert Sportswear Short Track Super Series (STSS) Fueled By Sunoco Modifieds event plus STSS Crate 602 Sportsman. The race will be taped to be televised on MAVTV at a later date. Fonda will not race on Saturday, July 6.

With Fonda dark on July 6, Glen Ridge picks up the racing action for Saturday night with “Vengeance” a 50-lap Modified event plus all divisions. On the same night the “Who’s Your Daddy II” 602 Regional Championship.