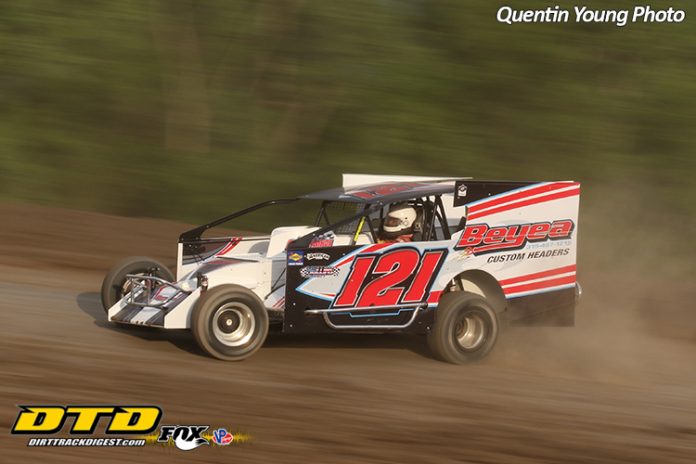 “I’m here to win and make some money,” said Modified veteran Pat Ward as he stood alongside a totally different ride at the Short Track Super Series event at Outlaw Speedway on Wednesday night.

Ward didn’t haul down his familiar 42p Gypsum Express Modified for this show, but here he was.

Pat relaxed a bit prior to the night’s racing action which would put him in the cockpit of the Beyea 121.

Ward, who really doesn’t like the STSS format of a draw, isn’t usually competing in the Brett Deyo Series,


However, the Genoa, N.Y., resident had good reason to be behind the wheel of the Beyea Modified.

He said, “He lives right down the road for me and he asked me if I wanted to try it out for him. It’s a good piece. I think it is a former Buzz Chew car. I am not totally familiar with this as it runs on coils.”

But the real reason he was with the team for one night was simple as he explained, “I known him for years. We bowled together, drank together and we are good friends.”

Ward noted he came to win and make some money, but as so often happens in racing the desire and the end result are two different things.

In his prelim he drew fifth and it took a late race restart to get second place Billy Van Pelt and achieve goal number one…to get to the draw.

The feature started off solidly as he hung around sixth in the very early going only to have Gypsum teammate Billy Decker (in a Jeremy Smith owned 91) spin in front of the field while running second.

Billy attempted to keep going, but had slowed enough that the faster cars simply came up on him and Pat ended up in the melee with Mike Gular and Brady Fultz.

Ward went to the back of the field, rallied but unfortunately wasn’t able to make up much ground and eventually finished a disappointing 14th place.

However, for one night two long time friends partnered up on a speedway and they deserved better.