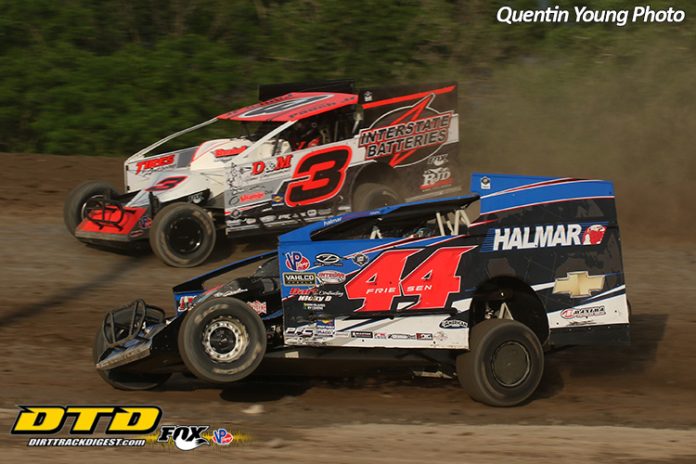 DUNDEE, NY –  40 of the top Modified pilots in the northeast converged on the Outlaw Speedway for the annual running of the Short Track Super Series event.  Under threatening skies the program was pushed along and when the 28 car Modified feature was taking their parade lap a light rain began to fall, however the race was started with the precipitation not causing any problems for the competitors.  By virtue of the re-draw, defending race winner from last year, Stewart Friesen started on the pole position as he along with Mike Mahaney brought the field to the opening green. Friesen immediately jumped into the top spot with several different drivers moving into the runner up spot but none seriously challenging Friesen for the lead.  Numerous cautions, most for flat tires slowed the pace throughout the first half of the 50 lap grind with top runners like Billy Decker, Matt Sheppard, Steve Paine and Mike Mahaney all suffering flats will racing within the top five. As the light rain continued fierce battles emerged through the entire field of cars as thirteenth place starter Eric Rudolf worked his way into the runner up spot by lap 30.  The third generation pilot from Ransomville, NY may have had the car to challenge Friesen for the top spot, but the rain came down to hard for the race to continue and on lap 33, STSS promoter, Brett Deyo and his officiating crew declared the track unsafe for further competition and the race was checker flagged with Friesen being declared the winner. This was only the second time in the history of the Short Track Super Series that a feature event had to be cut short due to rain.  For Friesen it was back to back wins in STSS Series events at Outlaw Speedway and for Rudolph yet another bride’s maid finish at the Yates County oval in 2019.

Following Friesen and Rudolph across the line were Mat Williamson for third, Jeremy Smith fourth while Danny Johnson, using a Track Provisional and starting last on the grid rounded out the top five finishers.

With the rain, all the remaining features including the Sunrise Insulation Outlaw Speedway American Racer Tire Series race #2, Stan’s No Tubes Street Stocks, Marion Decker Insurance Agency Hobby Stocks as well as the 4 Cylinder will be made up at a later date and when announced will be posted on the tracks Facebook at www.facebook.com/OutlawSpeedwayLLC/.


Up next at Outlaw Speedway on June 28, 2019 it will be Fireman and EMT Night featuring a Super 7 Show, Bicycle Give-a way and 1 on 1 Spectator Races.

Feature event was checker flagged on lap 33 of the scheduled 50 laps due to rain.