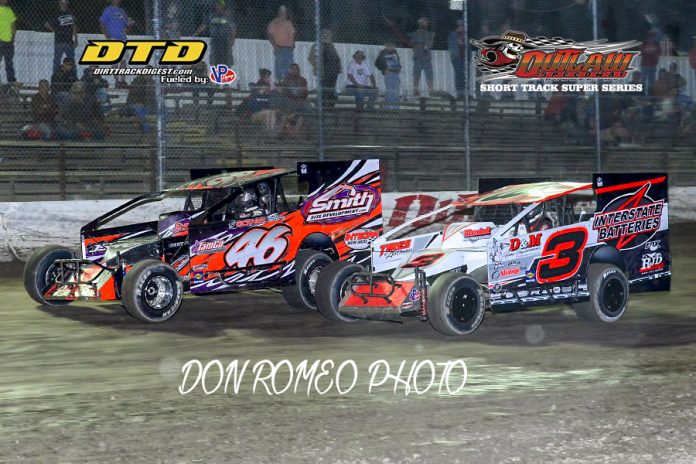 Mike Mahaney has had some new racing experiences this year and on Wednesday night at the Short Track Super Series event at Outlaw Speedway he hoped that success would continue.

The Bill Pascqual owned Teo chassis Bedell Engine machine is usually driven by Billy Pauch Jr. and Mike said, “Bill does a nice job and when this car shows up it is well prepared. Ralph DeGraw, the crew chief, is meticulous with the set up. The preparation is there and our ducks are all in a row and notes are good.”

Mike explained, “This is the second time with it and we won the first time out at Five Mile Point. Billy drives it, but he was scheduled to race at Action Track USA where he runs a SpeedSTR and a 600. There were schedule conflicts. He rained out today down there, but I’m still here to drive it.”

It has been a slight adjustment for the King Ferry, N.Y., driver as he noted, “It’s a Teo and I’ve run Bicknell all year. It has a different feel to it. However, it’s a Modified and I’ll figure it out.”


Well, figure it out he did as he put on a sensational race with Stewart Friesen in heat competition to earn a spot in the 12 driver draw.

Starting outside the front row he ran with the front pack throughout the event until a flat left rear tire relegated home to 19th in the final run down.

He went in with decent expectations for the STSS event and noted, “We are in decent shape in points thus far. At Orange County we were sixth as I ran my own 33 and then we were seventh in the Charlie Davis 21 at Thunder Mountain.”

This year has been a new year for Mahaney.

He hopped into the 35 for the weekly runs at Albany-Saratoga, Airborne and the Super DIRTcar Series Tour and had made the most of opportunities.

Looking back to the past weekend, Mike said, “We got a win at Albany-Saratoga. I have never won there before and really hadn’t raced there all that much. It is a new experience to run Malta regularly as well as Airborne as it is the first year I’ve run at Plattsburgh.”

Continuing he said, “Albany-Saratoga was a nice win for us. It was exciting as we’ve worked very hard to be competitive there. We’ve had pretty good results there right out of the gate and we are figuring it out and coming together.”

One of the differences came in the engine department as he noted, “Skip Seymour is helping with the motor and it has paid off.”

Over the years Mahaney has been getting more and more of the spotlight and when asked about the pressure that comes along with the sport he said, “Every team I drive for I put the pressure on myself. If you get the momentum going it reduces that pressure considerably. If you are running good on a regular basis then a bad night isn’t all that bad. However, if you repeatedly have bad night after bad night it really gets to you.”

Well it appears that Mike Mahaney’s “bad nights” are less and less and during the past few weeks with a win in the Pascqual car at Five Mile and a victory at Albany-Saratoga in his regular New York ride he apparently is starting to gain momentum.