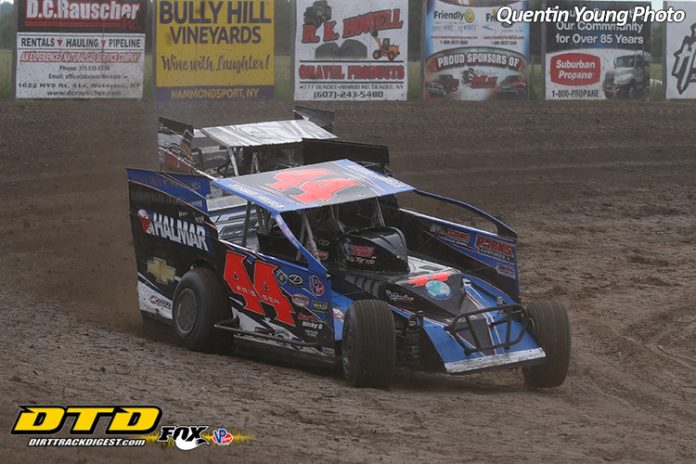 The biggest factor on Wednesday throughout the night’s racing program was the threatening nature of the skies surrounding the Outlaw Speedway. Although the forecast leading up to the event was for no rain and a beautiful night for racing, that quickly changed as Wednesday progressed. Series and speedway officials pushed through the racing program getting 33 of the scheduled 50 laps complete in the Short Track Super Series North Region feature before the rains forced the cancellation of the race making the running order the finishing order.

At the rained shortened end it was Stewart Friesen taking his second consecutive Outlaw Speedway series win. The Sprakers, N.Y., driver started from pole but had his concerns with the talent behind him including multi-time Outlaw Speedway winner Matt Sheppard.

“I was worried starting there,” commented Friesen. “This is Sheppard’s turf as fast as he’s been. It was good. We made some good adjustments to the car. We just ironed out some of the issues we found in the front end after Big Diamond.”

At a crucial point in the race Sheppard restarted to the inside of Friesen looking for the lead. Friesen just stayed in the outside groove at the green keeping Sheppard pinned to the bottom. That proved to be the right decision.


“I’m going ‘oh know, here we go,’” stated Friesen. “I just picked the top and got rolling. Obviously, I was good enough to hold him back there. I just stuck to my guns on the top. It started sliding the right front as the track was getting slick. I tightened the line up a little bit and it was good enough.”

It was Friesen’s 14th career win on the Short Track Super Series and a nice way to recover after difficult night at Big Diamond Speedway back in early June. The team needed the pick me up and he was able to get it done.

“We were good, then we struggled at Diamond so we went back to basics a little bit,” mentioned Friesen. “We went back to the package we won with last year and it was good. I started to get a little bit free there. I didn’t think track was going to slick off. They went out and graded it and it did wonders.”

Erick Rudolph missed a redraw spot by one position in his heat race forcing him to start a bit deeper in the field than the rest of the contenders on Wednesday night. Undeterred, the Ransomville, N.Y., driver figured out a way to get to the front. He concluded the night second after starting 13th.

“He was a bit better so I don’t think it would have mattered,” cited Rudolph about Friesen. “We’ve had a long absence from the series so it was good to come back and finish second. We are okay with it. Starting last heat in the race always puts you behind the Eightball. I thought we had a good car in the heat race. We were able to get third. It wasn’t good enough for a redraw spot.”

Rudolph agreed with the decision to stop the race when they did. He even felt like it may have helped him out.

“It was right decision as far as the rain goes,” said Rudolph. “It might have helped us a little bit along the way.”

Williamson Not a Fan of Rain Racing

Mat Williamson ended the night in the third spot, but he wasn’t happy with the conditions that teams were forced to compete in as the track got slicker and slicker as the laps clicked off Wednesday night. Williamson was involved in a scary rain incident at his home track Ransomville Speedway where cars flew off the track while damaging several cars in the process.

“The rain was challenging for Brett Deyo all night,” commented Williamson. “I’m disappointed that they made us race like that in the rain. We shouldn’t have been racing. It was unsafe. I was a part of that deal at Ransomville (Speedway) when we almost killed people. It doesn’t need to happen. When you are racing in the rain you think of what happened before. I’m just happy we just ended up with no damage. I think we were probably the second best car, maybe third to Sheppard and Stewy, but towards the end we just couldn’t see.”

Smith Gets Much Needed Finish

Jeremy Smith has had good cars for much of the season, but as of late he hasn’t the results he expects. Wednesday fourth place finish was more to his liking.

“This is really good,” mentioned Smith. “We’ve had fast cars all year, but we’ve had bad luck. We’ve had three dnf’s at Thunder (Mountain). We took the lead on lap six and broke on lap eight last week. We are finally getting back into the swing of things. We are looking forward to it. We got some good cars right now.”