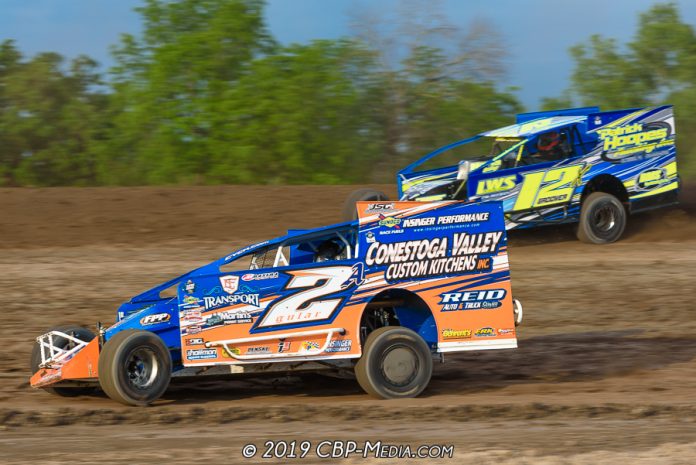 Entering the Short Track Super Series event at Outlaw Speedway Mike Gular was just 18 points behind Matt Sheppard in the race for the championship.

However, by the time the points were tabulated after the rain shortened feature event the top two in points had fallen to third and fourth behind new point leader Stewart Friesen and Mat Williamson.

Gular, from Frederick Pa., decided last year to begin a chase for points and finished in the top ten. During that trek he said, “I ran some new tracks including Outlaw, Woodhull and Albany-Saratoga” as it was indeed a learning experience.

However, 2019 brought with it another quest and thus far his season has been relatively good.


Mike explained, “We’ve had four top fours. I think we have good notes now after last year and we are figuring out what to do. We have that year under our belts.”

Racing primarily at Grandview the new tracks he showed up at last year were, “tracks of different styles. Things are a lot slower here as that is the way the bullrings are in this series. I grew up at Grandview and ran Penn Can.”

Continuing he explained, “This year we left Grandview to run at Orange County. I wanted to try to get better on bigger tracks and gain valuable experience. We haven’t had any luck at Orange County. Whenever we have a good run something happens. It has just been bad luck and we can’t seal the deal. We just need to get fast.”

In the point race he says, “It is running against the best of the best. Last year I finished seventh here and it is a neat little race track that races slightly like Grandview.”

On Wednesday night Gular got the handle on the track quickly and he had too.

Starting in the back row of his heat with, what he calls, “a true small block under 358’” he knew four qualified and two went to the draw. However, just like any other driver in the pits the draw positions are critical.

He finished second to Billy Decker to get that draw, but it didn’t come easily. He caught one break when second place Danny Johnson shredded a right rear.

He did succeed in a good draw to start inside of row two, but on the seventh lap Billy Decker spun in turn two. Gular went high, but as Billy got back on it Gular made contact and suddenly found himself in the back of the field as the result of being involved in the accident. He had been fourth at the time.

Watching him work his way through the field was mesmerizing and by the 23rd lap was sitting 10th.

He eventually settled for 11th while high point man Sheppard was 16th.

Point wise Sheppard remained two points ahead of Gular in the standings with 302-300.

However, Stewart Friesen now had 334 and Williamson is just 10 points behind.

For Mike Gular he remains in contention as he noted he would “like to be among the top three” when the season comes to an end.