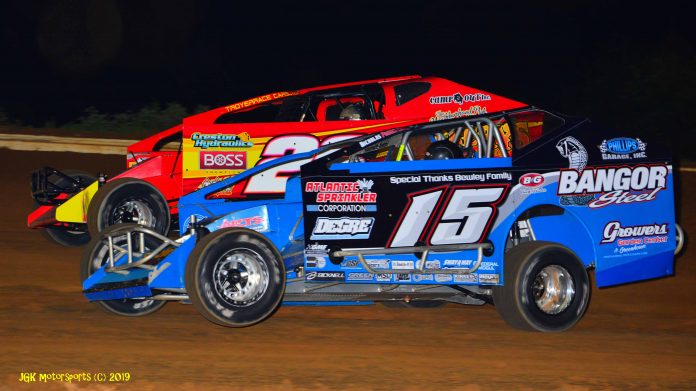 POTTSVILLE, PA –  For Billy Pauch Jr, the struggle was real. Pauch has not been on his game all year at Big Diamond Speedway but Friday night Pauch found the combination he needed to return to victory lane In the 25-lap main event for the Insigner Performance 358 Modifieds.

With the starting lineup being determined by a draw before handicapping starts next week, Pauch found himself on the pole for the 25-lap main event. Pauch immediately took the lead at the drop of the green with Shawn Fitzpatrick running in second. The yellow flag was displayed after one lap due to a piece of debris on the front stretch. Back to green and it was Pauch once again taking control as seventh place starter Craig Von Dohren was on the move and up to second on lap three with eighth place starting Ryan Godown right behind in third.

The yellow was again displayed on lap 11 as Scott Albert came to stop. Pauch continued to set the pace on the restart with Von Dohren and Godown battling for the runner-up spot. Another yellow slowed the action on lap 13. The two leaders came together down the front stretch on the restart as Von Dohren was making a bid for the lead on the outside with Pauch able to maintain his lead. One lap later Godown was able to work his way past Von Dohren for second and started to chase down the leader Pauch.

Kevin Beach came to a stop on lap 18 to slow down the action setting the stage for another chapter in the Pauch / Godown rivalry story. As the field returned to green, Jared Umbenhauer lost control of his No. 1H collecting Jeff Strunk to slow the action for the last time. Pauch once again was able to win the battle on the restart with Godown applying the pressure. Godown was able to get under Pauch in the corners but Pauch was able to maintain his line off the corners to stay in front. As the laps wound down, the race turned really intense as the two archrivals ran side by side with the crowd on their feet waiting for something too happen. Godown gave it all he could each lap as the laps wound down but was just not able to make the pass as Pauch sped under the checkered flag to take the much-needed win for his team. Godown finished second with Von Dohren, Frank Cozze and Ryan Krachun completing the top five.

“Man, that felt good to get a win here tonight,” said an elated Pauch afterwards. “We’ve been really struggling here and just couldn’t figure out what we needed to get the car to work. We went over the car this week and changed a bunch of stuff and in the heat, we still couldn’t get the front wheels to stay on the ground, but we made some adjustment for the feature and it worked out. Starting up front always helps but the we held off two of the best here. We’ll see how we do next week when we have to start further back.”


In the 25-lap URC feature, it was Chad Layton leading from start to finish in a race that was marred by a total of four red flags. Layton took the lead at the drop of the green as the race was stopped when Todd Gracey rolled his sprinter in turns three and four. The race resumed but once again came to a stop with the Keith Wetzel going and up and over the wall between turns three and four. Layton continued to lead as the race was red flagged yet another time as Mike Walter went over again in turns three and four. The race resumed with Layton again taking command when the final red flag came out on lap six as Ryan Stillwagon went hard into the yuke tires lining the top of turn two. Thankfully all drivers were okay.

When we finally returned to some continuous racing, Layton charged out to a big lead as Davey Franek held onto second. Layton, who has quite a bit of experience here at Big Diamond as he used to dominate the KARS sprint car series here at Big Diamond Speedway in years past used his knowledge of the speedway as the race wound down with the leader starting to have to deal with lapped traffic. Franek was making gains as the five to go signal was put out and was able to catch Layton. Layton continued to work the low line as Franek was running the topside and was able to use the lapped traffic to hold off Franek for the win. Following Layton and Franek across the line to finish third was Josh Weller with Jason Schultz and Eddie Strada rounding out the top five.

The Savage 61 Road Runner feature was another side by side slam banging affair with May Ney winning a duel with Chris Holland to take the win. Kris Ney would take the lead on the start with Matt Ney moving up quickly and taking the lead on a lap six restart. The Ney’s ran side by side for a few laps as Holland was on the move wanting to throw his helmet into the mix. As the field approached the halfway mark Shaun Mulhall was part of the mix making it a four-car battle for the lead. The last ten laps were slowed by two yellows, but the racing was fun and exciting. Kris Ney’s night ended on lap 18 as he was forced into the yuke tire setting up a two-lap shootout between Matt Ney and Holland. The two drivers swapped the lead over the remaining two lap with Matt Ney coming out on top to take the win. Mulhall was able to squeak by Holland for second with Holland ending up third. TJ Fitzpatrik and Tonya Lance finished fourth and fifth.

The Pizza Shop of Etters Central PA Legends race was won by Travis McClelland by virtue of a last lap pass over Mason Cheyney and Jeremy Ott. Scott Houdeshell and Aaron Updegraff completed the top five.

Did Not Start – Billy Osmun

The Modified heats were won by Scott Albert, Craig VonDohren and Jared Umbenhauer.

The URC heats were won by Todd Gracey and Mike Walter II.

The Roadrunner heat was won by Jim Kost.

Did Not Start – Brent Marquis.

The Legends heats were won by Scott Houdeshell and Travis McClelland.