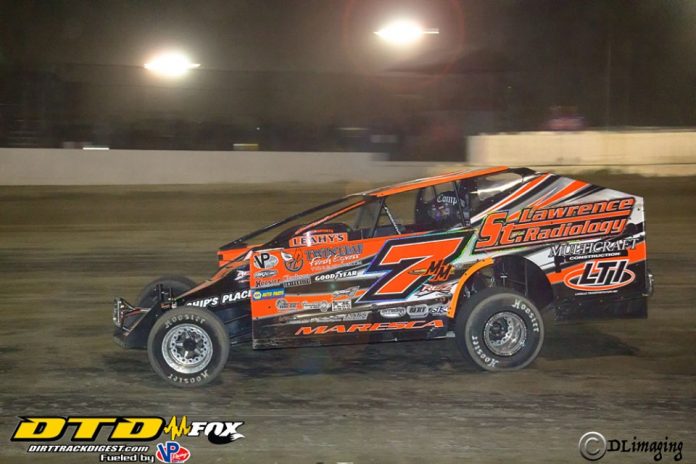 HOGANSBURG, NY –  It had been too long since the top drivers at the Mohawk International Raceway assembled and the action was non-stop all night long as the race fans along with evening sponsor Cedar View Golf Club, were treated to a fantastic night of racing.

In the opening leg of the MIR Sportsman Series event Zack Arquiett, who came into the night 2nd in the Crossroads Tobacco Sportsman points standings, took over the lead in the early going but it was Cedric Gauvreau who would take command of the field. Gauvreau took over the top spot on lap 3 and began to pull away from the field. On the same lap Codie Aubin had problems in turn 2 breaking the front end on his race car. On the restart it was once again Gauvreau in control but a new challenger emerged as defending track champion Brianna Ladouceur had moved to the 2nd spot with Arquiett, Andy Howard and Thomas Cook rounding out the top 5. On lap 11 Dustin Bradley saw a shot at a top 10 run go away as he blew a right rear tire, and the caution would come back out. When the green flew Ladouceur had enough of running 2nd as she charged by Gauvreau to claim the lead while Arquiett, Cook and Howard continued to battle in the top 5. Once in front Brianna Ladouceur was on cruise control as she pulled out to a straight away lead while Gauvreau tried his best to keep pace. Behind the top 2 a great battle ensued as Zack Arquiett had his hands full with Thomas Cook, Mike Stacey also emerged to become a late contender and points leader Shane Pecore, as the put on a great battle for position. As the laps wound down traffic came into play which was playing right into the hands of Cedric Gauvreau who closed the gap again on lap 27. Ladouceur however was not phased by the pressure of lapped cars as she navigated the traffic perfectly and pulled away in the final laps. After a season that has been up and down, the defending track champion put it all together as Brianna Ladouceur scored her first win of the season at MIR and third career MIR Sportsman series win. Cedric Gauvreau claimed 2nd with Mike Stacey winning the battle to grab 3rd over Thomas Cook and Zack Arquiett.

The Can Am Mod Lite Series was also on the card and 27 cars came to the green flag for their 20-lap event and 2017 track champion Nick Mallette was the dominant car in the early laps over Kevin Foster, Keven Boucher Carrier, Scott Sharp and Michael Dion. After building up a near straight away lead on the field the caution would fly on lap 11 for Scott Sharp who spun his car in turn two. On the restart Mallette continued to lead but Jeff May who experienced problems in the hot lap session earlier on, had come from 27th starting spot to make his way alongside of Mallette for the top spot with Kevin Foster right there to challenge in third. On lap 15 May would make the pass that counted as he took the lead using the outside lane with Nick Mallette, Kevin Foster, Steve Comeau and Michael Dion completing the top 5. Over the final laps not even a pair of late cautions could stop his charge as Jeff May charged from way out back in a quality filled field to claim his first win of the year at any race track in 2019. Kevin Foster would cross in 2nd with Steve Comeau charging to third while the father/son team of Doug and Justin Williams completed the top 5.

In the Twin Leaf 358 Modified division Michael Maresca was looking to add his name to the list of drivers who had won a DirtCar sanctioned feature in all three open wheel divisions and he made the first step by taking over the lead early on. Once in front Maresca was able to set a pace that he was happy with, which was a straight away, over Chris Raabe, Tim Fuller, Preston Forbes and Lance Willix. The field began to stretch out and this was helping Maresca as he held the advantage by well over a straight away on lap 12 and showed no signs of letting up, even in lapped traffic. Behind the leader Chris Raabe and Tim Fuller were having their own battle as Fuller made several attempts to get by but Raabe was able to hold onto 2nd over Forbes and Willix, who were well over a straight away behind them. With 10 laps remaining the top 3 were all clear of traffic as Raabe and Fuller were slowly chipping away at the lead. Without the help of a caution throughout the entire 30 lap distance, along with a very fast race car, Michael Maresca would go unchallenged in a dominant performance, leading all 30 laps to score his first DirtCar 358 Modified feature win. In the process Maresca also became the 46th different driver to claim at least one win in all three open wheel divisions in DirtCar Northeast. Behind Maresca it was Chris Raabe grabbing 2nd over Tim Fuller, Carey Terrance and Lance Willix.

The Novice Sportsman division saw Nolan Swamp take over the lead in the early going and was looking to claim back to back wins over Deric Ellsworth, Joshua Pete, Dan Reif and RJ Tressider. The caution however would fly early as Gavin Riddell made contact with another competitor sending him off the speedway in turn 2. On the restart Swamp remained in control but it was former Mod Lite champion Deric Ellsworth rising to the occasion as he closed in on Swamp who was using the extreme outside lane to hold the lead with Joshua Pete still holding a solid third. On lap 9 Ellsworth would use the bottom lane to his advantage as he took over the lead and would pull away in the final laps. After a successful career in Mod Lites, Deric Ellsworth began a new chapter as he scored his first ever Novice Sportsman checkered flag on this night. Nolan Swamp scored his 2nd straight runner up finish over Joshua Pete, reigning Mod Lite champion Dan Reif crossed in 4th with last years Bandit champion RJ Tressider claiming the number five spot.

In the Bandit division Francis White was looking to claim his third win in a row but an early race tangle in turn 4 in the opening lap saw him experience mechanical issues which sidelined his machine for the night. When the race restarted it was Matt Zira taking over the point in the 10-lap affair over CJ Lavair, Terry Green Jr, Mitchell Regan and John Martin. After running 2nd the past two weeks Matt Zira was determined to get to victory lane and was looking to do it quickly as he pulled out to a huge lead leaving CJ Lavair in 2nd and trying his best to keep pace. Over the final laps, along with no caution flags, Matt Zira finally got the monkey off his back as he claimed Bandit win number one in dominant fashion. Lavair held on for 2nd over Terry Green Jr., Mitchell Regan and John Martin.

With another night in the record books the action shifts to next week with Smokers Warehouse on hand as the night’s sponsor. A full program is in store for the Twin Leaf Stores 358 Modifieds, Crossroads Tobacco Sportsman, Novice Sportsman, Mod Lite and Bandit divisions. Racing as always gets underway at 7:30pm. Canadian money will also be accepted at the main gate only and for all Canadian fans, a reminder to get your receipt at the toll booth and exchange it for a free bridge pass for the ride back home.