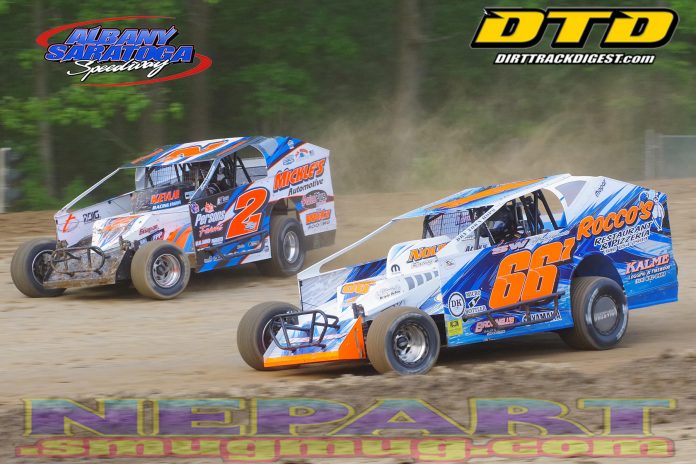 By MATT NOLES
MALTA, NY – In racing – much like life in general – there are some aspects of the sport that can be taught; others, on the other hand, must be learned through the greatest teacher of all: experience.

It’s rather safe to say that third-generation racer Ronnie Johnson has had seemingly unlimited access to one of the greatest professors in the history of northeast dirt modified racing. In all actuality, it’s a fact that cannot be denied.

Yet for all the lessons passed on during his formative years of youthful exuberance by his famous father, a driver will only reach a certain level in their respective career before the proverbial training wheels are removed and the coveted ‘tricks of the trade’ are garnered through the often-painful lessons of trial and error.

On Friday night at the Albany-Saratoga Speedway in Malta, N.Y., the driver of the No. 2RJ put all of the tools in his possession to the test as he successfully held off second-year Modified driver Rocky Warner on his way to victory in the scheduled 35-lap Upstate Buick GMC Dealers Modified feature bringing his career win total at the Saratoga county oval to 28.

“I’m very thankful for the race team I have,” Johnson said in victory lane Friday night. “We have some great sponsors between Mickle’s, Persons Farms, W.M. Larned and Witz Roofing just to name a few and we have a group of people that have been together for a long time so I’m proud of our team; this is for all of us.”


Johnson may have made his latest triumph look strikingly easy. However, it was nothing less than a marathon.

Though some races click off completed circuits in rapid succession, that cannot be said for the prolonged affair as caution after caution slowed the pace and gave numerous opportunities for Johnson to slip from the lead and out of winning form.

“I don’t like all of those cautions back-to-back-to-back,” said Johnson. “The second you break free and get back in a rhythm the yellow comes back out and then you have to do it all over again.”

Johnson, who started from eighth on the grid, quickly broke into the top-five in the running order within a mere handful of circuits in the early going leaving the Malta faithful certain that his march to the front was going to be unobstructed. Rich Ronca, driver of the No. 1 Modified and the pole-sitter, had other ideas.

Lap-after-lap both Ronca and Johnson raced door-to-door from one end of the speedway to the other with neither veteran willing to give an inch. Finally, by lap-10, Johnson found enough bite to power around the outside and into the runner-up position.

“He [Ronca] was running good,” Johnson explained. “He had that bottom lane handling well and it seems like the small-blocks are tough here right now. I really had to search for some bite and find some grip to finally finish him off.”

With Ronca safely behind him, Johnson set his sights on then race leader Jackie Brown Jr. in the No. 91NY modified. On the 12th circuit, Johnson made his move into the lead yet the pass was made null and void as another caution reset the field.

After the restart, Johnson again went to the top of the speedway and utilizing the same move he had a handful of laps previous, the Mickle’s Automotive sponsored, Kevlar powered entry charged to the front and straight to the bottom groove without hesitation.

“I felt like the track was slick enough and I know this place pretty well,” he continued. “I’ve raced here long enough to know that if somebody was going to beat me, I was going to make them go around me. I knew that was what I had to do tonight.”

With years of valuable experience in his repertoire, Johnson quickly went from planting the right rear on the cushion and standing on the loud peddle to backing off and rotating around the bottom lane with ease making the transition look seamless in the process.

“We changed this car this week,” stated Johnson. “Dennis from Race Prep Shocks came to the shop and helped me quite a bit. We threw a new setup at the car and we hit on something better than we had been that allowed me to peddle through the corners and get a good exit coming off.”

The final test came on lap-24 as a late-race caution placed Rocky Warner right alongside Johnson. Needless to say, the driver of the Jake Spraker owned No. 1J is no slouch at the ‘Great Race Place’ and what’s more, he proved so on the ensuing restart.

“When I fired with Rocky next to me, he stayed with me,” Johnson explained. “I knew I needed to hit my marks to hold him off. He’s been awful fast here but tonight was our night and hopefully this is a sign of things to come.”

The 2019 season hasn’t been awful by any means as for the most part, Johnson has been knocking on the door with top-five and top-ten finishes yet there was more speed in his Teo chassis than was being showcased in the opening rounds of the point chase. It’s safe to say he’s beginning to find his stride.

“We’re definitely heading in the right direction,” concluded Johnson. “I’ll go home tomorrow morning and analyze where we are right now and see how we shape up but the car feels good and that makes me confident to drive it. I can’t thank my family, my sponsors and my crew enough for everything they all do to make nights like tonight possible.”