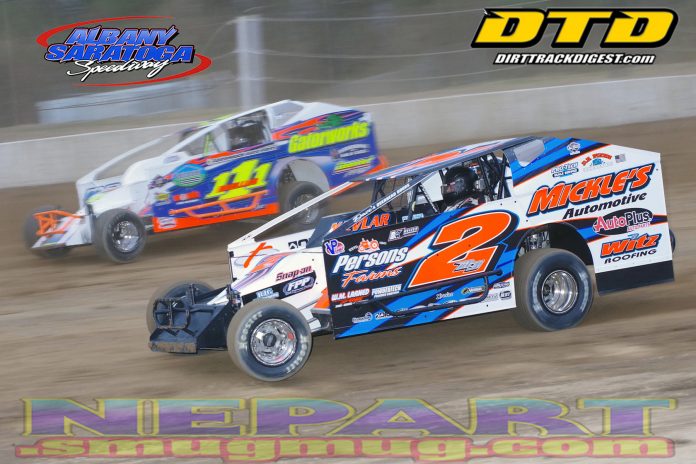 MALTA, NY – On some nights, it just doesn’t make sense to overanalyze a situation.

Case in point: Ronnie Johnson has been in a slump at Albany-Saratoga Speedway; Johnson got his first win of the season in Friday night’s 35-lap modified feature; the slump is over.

“This is a tough, grueling sport,” said Johnson in victory lane. “You have to just keep clawing and digging at it. I’ve got great sponsors, and a heck of a race team, and they’ve stood behind me all year.”

Since the season began, Johnson has had only one top-five finish, that coming in the second event of the season on May 17. But everyone knew it was just a matter of time before he got his first win. It looked like he was in position to accomplish that last week, when his run of bad luck put him fifth on the starting grid for the modified feature. But 35 laps later, he finished fourth.


So when he lined up eighth Friday night, there really wasn’t much reason for optimism.

But this time, everything went his way.

While Johnson and Peter Britten, who had started 10th, were searching for the fastest line around the speedway early in the feature, up front, Jackie Brown Jr. and Don Ronca were waging a heated battle for the lead. The two cars touched going down the backstretch on lap six, which got Ronca out of shape and allowed Brown to take the lead and put Britten into third, behind Rich Ronca.

Britten avoided disaster on lap 14, when he lost control of his car and slid off the inside of the second turn. He was able to gather the car back in, but fell from second to seventh.

Two laps later, Johnson rocketed by Brown and had the lead.

From there, it was just a matter of handling restarts. First, Johnson had to hold off Matt DeLorenzo, and following another restart on lap 26, Johnson had Rocky Warner clinging right to his rear bumper.

But it didn’t matter if Warner ran high or low. Johnson refused to give up an inch of track, and came away with the victory.

“Small blocks have been fast here all year, and when I saw Rocky beside me, I knew I was going to have my hands full,” said Johnson.

All he could pinpoint that was really different Friday was his shock package.

“Tonight we put Dennis Palmatier’s shocks on [Palmatier is the Northeast modified specialist for Integra shocks) and he helped us with the setup. I think we hit on something with the shocks,” Johnson said.

Warner had to settle for second for the second time this season in the Jake Spraker-owned 1J.

“Ronnie was using the whole race track,” said Warner. “It was a veteran against a rookie. He made it so I couldn’t get a direct line to get by him.”

Completing the top five were Britten, Keith Flach and DeLorenzo.

The caution-plagued 25-lap sportsman feature came down to a green-white checkers finish, with Jason Gray holding off Scott Duell for his first win of the year, even though Gray lost his power steering with two laps to go.

The 25-lap pro stock feature was the last race on the card, but proved to be the best race of the night. Sixteen-year-old Scott Towslee and veteran Kim Duell battled side by side for the last five laps, swapping the lead back and forth, as Towslee was having problems keeping the car in line coming out of the fourth turn.

But he was perfect on the last lap, holding off Duel by inches (the margin of victory was .076 seconds) to record his first career victory. Towslee joined his father, Chuck, on the all-time pro stock win list at Albany-Saratoga, as Chuck retired with four victories.

“This is awesome” said the younger Towslee after the win. “When I saw Kim there, I knew I had to stay on the bottom because the bottom was faster.”

Bill August was also in victory lane at Malta for the first time in his career, winning the 20-lap Haun Welding limited sportsman feature. He started on the front row and had the lead after the second lap, but had to survive a number of restarts and a late challenge from Scott Bennett Jr. to get the win. Bennett finished second, with Dylan Bokus third.

“We’ve been trying and trying, with car after car after car, to get here [victory lane],” said August. “If I didn’t have a crew that busted their butts to get the car back together, we wouldn’t be here tonight.”

The Lake Auto Parts street stocks ran a special 20-lap Native Pride Red Cloud feature, with Randy Miller taking advantage of a mishap between leaders Dave Cook and Al Relyea make his way back to victory lane. Cook and Relyea were battling for the last on lap 11, and Cook, running a low line through the fourth turn, bounced to the outside and banged into Relyea, which got Relyea sideways. That incident allowed Miller to go from third to first, and he went on to notch his third win of the season.

Following Miller across the finish line were Mark Burch and John Filarecki.

The Bear Ridge DMA USAC midgets were also on Friday night’s card, with Will Hull of Plainfield, Vt., getting the victory.

Hull had been fast in his heat race, and only needed fourth laps to go from his sixth row starting position into the lead in the feature, using an extremely high line. Seth Carlton finished second, with Joe Krawiec third.

Hull had also been at Albany-Saratoga the previous week, trying to qualify for the Empire Super Sprints feature. But he blew the motor in his car that night