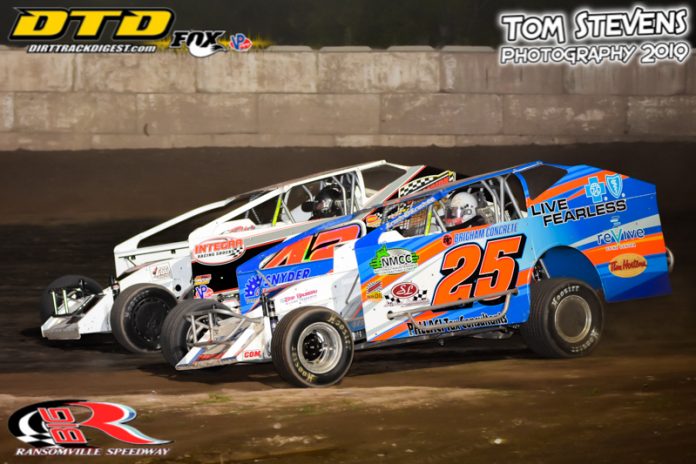 Rudolph’s win extends his win streak to three races to begin the 2019 season at the “Big R” second win of the year at Ransomville in a 50-lap race.

A total of 24 358 Modifieds were on hand for the third annual edition of the Sid Jeffery Memorial. Rudolph lined up third in the starting lineup behind front row starters Mat Williamson and Greg Martin.

Williamson jumped out to the early lead after a brief side-by-side battle with Martin. Pete Bicknell quickly moved from the seventh starting spot to pass Rudolph for third place on lap 3. He passed by Martin for second place just two laps later. Williamson ran out to a slight lead over Bicknell and Rudolph during the opening 15 laps of the race.

The trio then encountered lapped traffic for the first time, which brought them back together. Rudolph managed to get by Bicknell for second around lap 19 as they navigated through the slower cars. He then caught Williamson just before halfway, and took the lead just the pair raced under the crossed flags.


The yellow flag waved for just the second time on lap 32 after the field ran 30 consecutive laps under green. This lined up Rudolph and Williamson side-by-side for the restart, and Williamson made the most of this opportunity. He took off when the green flag waved again to take the lead back while ripping off his fastest lap of the race.

Williamson opened up an advantage on Rudolph, but lapped traffic once again played the role of equalizer. The pair raced into heavy lapped traffic with less than six laps to go. Williamson tried to drive between a pair of slower cars in turn three, but the hole closed up too quickly. Meanwhile Rudolph drove to the inside to regain the lead for good on lap 45.

Rudolph drove away in the closing laps to secure his third-straight win at Ransomville in 2019. Williamson finished second to earn his third top three finish in a row to begin the year. Chad Brachmann finished third. Mike Bowman took home hard charger of the race as he drove from the 17th starting spot to finish fourth. Gary Lindberg completed the top five.

Scott Kerwin had originally stepped out of the driver’s seat for the 2019 season, which allowed Mat Williamson to take over the driving duties of the #6 Wendt’s Propane Modified. The 30+ year racing veteran has been serving as a crew chief for the Novice Sportsman driver Bubby Pawlak since hanging up his helmet, but he got the call to get back behind the wheel on Friday night.

Kerwin hopped aboard Pawlak’s #1 Hy-Tech Concrete Sportsman for the Sid Jeffery Memorial. He came from last place in the heat race to sneak into a redraw position on the final lap. The luck of the draw was not on his side as he lined up 10th at the start.

The initial field of 34 Sportsman was pared down to 28 starters for the 30-lap main event. Derek Wagner and Brad Rouse started up front. Rouse jumped out in front early with Wagner following close behind.

The first caution of the race fell on lap 13 when Garrison Krentz slowed after making contact with the wall. The race restarted, but was slowed again at the halfway point for multi-car pile up in turn three. Robbie Johnston, James Michael Friesen, Chris Burek, Adam Leslie and Jim Harbison were among those involved.

Kerwin managed to land in fourth place by this point. On the ensuing restart he passed Andrew Smith, who had developed shock issues on the right front, and Wagner. He then quickly got alongside Rouse for the lead, and the pair crossed the finish line in a dead heat on lap 16.
Kerwin took the lead for good just one lap later. He bolted away from the field in the closing laps to secure the victory. Kerwin almost didn’t get a chance to compete after Bubby Pawlak got the side of the car up on the wall during his heat race. Luckily the incident didn’t do too much damage. Pawlak ran his feature, and then handed the steering wheel to Kerwin.

“I showed up at the track, and the crew asked me if I brought my helmet and gear with me because they said I was driving tonight,” said Kerwin. “I told them I didn’t, but luckily my daughter was still home and she was able to bring me my helmet and firesuit.”

David Fingerlow of North Tonawanda, N.Y. started on the pole and led all 15 laps of the Stevenson’s Hardware Novice Sportsman to earn his second win of the season. Fingerlow drove a near perfect race and faced few challenges while en route to the win.

Mike Martin finished second in his best effort of the season followed by Kenny Washburn and Orval Harris. Bubby Pawlak bounced back from his wall ride in his heat race to finish fifth.
“That Guy” Mike Kramarz of Niagara Falls battled back to win his second Gippster’s Collision Mini Stock feature of the season. Kramarz was forced to pit under caution on lap 5 when his car started leaking fluid on the race track. The leak stopped, and he was able to get back on track, but he found himself in last place.

Kramarz quickly zoomed his way through the field and he caught race leader Ashley Blech at the halfway point of the 15-lap feature. He took the lead from Blech one lap later, before the engine in Blech’s car expired.

Next Friday, June 28, UBREAKIFIX, Hy-Tech Concrete, Moley Magnetics and Hebeler Sales and Service present Fireworks Night at Ransomville. Kick off your Canada Day or Independence Day week at the “Big R” with a full card of racing and a gigantic holiday fireworks display. Racing starts at 7:15 p.m.