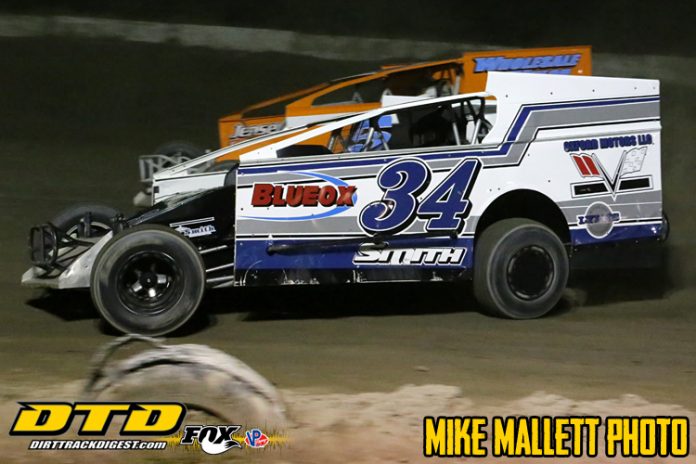 AFTON, NY – Rusty Smith (34) behind the wheel of his Blue Ox Energy Modified garnered his first feature win of the season in front of the fans attending on the 130th Afton Fair. The Afton Fair presented the show on this night and the other winners to grace the Mirabito Energy Products victory lane were as follows. Blaine Klinger (9K) Klinger Power Sports picked up feature win number two on the season in the Crate 602 Sportsman division. In the IMCA Modified division Matt Roberts (613) got win number one of the season aboard his potent Greg Page Construction Machine. The Street Stock division and the Four Cylinder Truck division saw both Butch Green (57) Powderworth and Ralph Cuozzo (00) RC Sales & Service respectively picked up there fifth of six races.

The ZMK Construction Modified division started their thirty-lap feature with Jeff Sheely (38) and Tim Mayne (8m) occupying the front row. At the drop of the green Sheely gets the lead with Mayne close behind and Sheely leads lap number one. Rusty Smith from his fifth starting spot was already pressing for the top spot and got there down the backstretch and as they crossed for lap two Smith was the leader. The same time Ken Titus (9) got by for second before the next lap was completed and put pressure on Smith. Jeremy Smith (46) was starting to use the top of the speedway to try and run down the front runners at this point of the race some positions were being exchanged throughout the pack. Around the one third part of the race Brandon Walters (22) was pressuring the for a top five spot and Also Shaun Walker (57) was pressuring for third. The first caution appeared on lap twenty-one for Walters coming to a stop on the front stretch. Early leader Sheely also went pit side at this time and before going back to green Walters looked as he was coming back out but trouble had to be more than first thought as he went back to his pit before coming out to the track. The running order at this time was Smith, Titus, Walker Jeremy Smith, and now in the top five Brett Tonkin (15). On the restart Jeremy Smith powered to the topside to grab second and set sail after Rusty Smith but to no avail as Rusty crossed the line for feature win number one on the season. Crossing the line second through fifth were Jeremy Smith, Titus, Tonkin and Walker. Heat wins went to Jeremy Smith and Rusty Smith. Smith in victory lane stated he has been struggling here early in the season but the car was good tonight and working really good on the bottom. He also mentioned how smooth the track was tonight.

In the Pit Stop Auto Street Stock class the twenty-lap feature saw Bob Crandall (1) and Jonathan Fowlston (160) bring the racers to Scott Stevens green flag. Crandall shot to the lead on the drop of the green with Fowlston a close second as the top two fought for position. Jake Fowlston (66) and Green are on the move and by lap five Green took over second With Jonathan Fowlston and Dad Jake behind him for fourth and fifth was Donald Briggs. The first caution came out on lap seven for Briggs going around on his own in turn four. The restart saw Crandall continue with the top spot until be overtaken by Green on lap nine. Doug Polhamus (KP1) is starting to work through traffic and pressured Crandall to the finish but could never shake the by him. The top five at the end of the feature was Green, Crandall, Polhamus, Jake Fowlston and Dave Cronk. The two heat winners were Butch Green and Dave Cronk. Green mentioned in victory lane that the track is very good and the competition is getting much better. He said he has done this for twenty years so he adjusts to about anything on a given night. Talked about his crew as they are the backbone and the car owner and sponsors.

The front row for the start of The Trophy Guy IMCA Modified division saw Brad Smith (76) and J.T. Roe (3G). Brad Smith grabs the lead and Brandon Smith (96x) who started right behind him follows through for second Matt Roberts takes over second on lap two and the on lap three the only caution comes out as leader Smith starts to go around in four. Roberts makes a little contact as he had no where to go and come out with the lead. Gary Roberts (U2) drops off the pace and goes to the infield on lap ten and no caution needed as he clears for enough off of the track. Tyler Stoddard (23) gets to second but never is able to get Roberts for the win as Roberts was strong on this night. The top five at the finish was Roberts, Stoddard, Beau Ballard (15), Brandon Smith and newcomer Matt Szecsodi (27). Heat wins went to Tyler Stoddard and Beau Ballard. Matt Roberts said it was good to be standing here in the Mirabito Energy Products victory lane and on Fair night with many local folks here. Car was working great and was fun to drive.

The final feature of the night was the Rinker Insurance Agency Crate 602 Sportsman division where Gary Miller (1M) and Kamdin Maby (56K) brought the starting grid to the line for the green. Before lap one could be recorded Steve Andersen (73A) and Mike Grover (33G) got together in between turns one and two and both could restart. It was a complete restart except for the two involved and rookie driver Miller jumps to the early lead and is drawing away as he was going strong. Blain Klinger from his seventh starting spot is on the move and takes over second as they go across the line on lap five. A caution as the field goes by on lap six but a caution comes out in turn one so the field reverts back to lap five for positions. The yellow turned to red as a driver was apparently injured but after review was fine. The cars involved were (60x) Kinser Hill, (9s) Travis Welch, Andersen, Grover and Fred Smith (119). When they go back to green Klinger goes to the top of the speedway and takes the lead that he would never relinquish. Miller who is running a strong second but behind him a fierce battle is going on for third through seventh with A.J. Digsby (99), Allan Hodge (5H), Ryan Macartney (24), Gary Smith (7up) and Dave Rosa (61) the ones battling for the spots. Gary Smith was working the extreme high side and Rosa and Digsby the inside. Macartney and Hodge was working more of the middle part of the track. The action slowed one more time for Dustin Harris (96) breaking him frontend after taking on an implement tire in turn two. The top five at the finish was Klinger, Miller, Digsby, Macartney and Rosa. Klinger in victory lane knew he was faster than leader Miller before he got by as car was working great as I just had to find the right time to try to get by. He thanked his crew Mom, and Dad for giving him the opportunity and all his sponsors. The three heat winners were captured by Allan Hodge, Ryan Macartney and Klinger.


The Green Briar Farms Combined Four Cylinder Trucks and Car again was just Trucks found Pete Christiansen (33) and Dylan Nichols (01) occupying the front row for the fifteen-lap feature. Nichols wrestled the lead from Christiansen in the early going Eventual winner Cuozzo was next up to challenge Nichols for the lead and does eventually take the top spot. No cautions in this feature which were run right ever the heat races for the other classes as this class had no heats. At the line the top five was Cuozzo, Dane Hedlund (22s), Nichols, Christiansen, and Steve Condiloro (86). Hedlund and Nichols got together shy of the line and came across with Hedlund sideways. Head starter said to put the (01) to the end of the scoring order as the race was complete then. That moved Mark Steves (29) to the top five.

A.M.P. Notes; The racing on this night went on with the 130th Afton Fair going on at the same time out on the midway. It was great to see some new faces in the crowd coming in from the Fair. A huge and very spectacular Fireworks display was held at the end of the races by the American Fireworks Company. The nine qualifying heats and the fifteen-lap Truck feature was run off in forty-eight minutes. The Modified feature once again was done before nine o’clock and then the three interviews and fifty/fifty draws with just the Sportsman feature remaining and fireworks and it all was done before ten o’clock. The track was again very smooth and minimal dust and the drivers doing great makes it the place to be on Friday nights as we start at seven and out by ten. Quick quick quick and the folks are loving it. Gary Miller in the Crate Sportsman with his second-place finish solidifies just how quick a learner he is as he has never raced anything until this season. In the IMCA Modified division fifth finishing Matt Szecsodi made a nine-hour haul to be in competition from his home in Michigan. His home track had the night off so he thought he could catch a couple of races out here. Another driver making his first start at the track was Travis Welch in the Crate Sportsman division who purchased a former Matt Sheppard (9s) Modified a week or so ago. He got it transformed to the Sportsman but unfortunately, he was caught up in that lap five melee. The Chamber’s & O’Hara Open Sportsman had the night off but all classes will be in action this coming week. It will also be mid-season championship events for the Modified, Street Stock and combined four-cylinder Trucks and Cars.