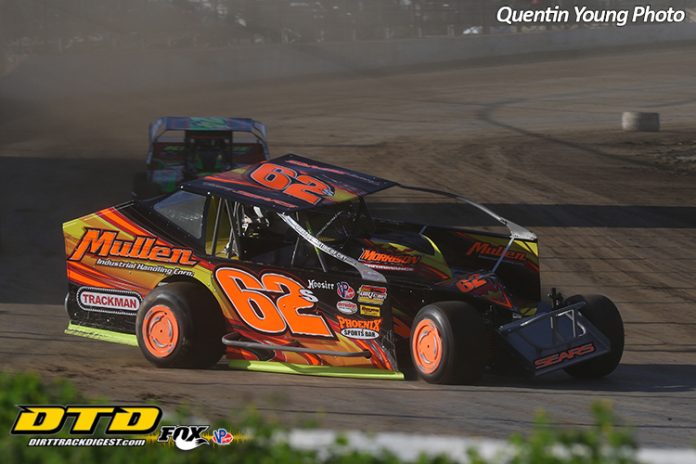 The last time Tom Sears Jr., parked in victory lane at the Brewerton Speedway it was June of 2015.

To be fair, Sears took some time away from the facility racing sporadically until making a full-time return to the ‘D-Shaped Dirt Demon’ last year with his Mullen Industrial sponsored No. 62s.

The 2018 season didn’t go nearly as well as he would have liked forcing the veteran driver to make some changes over the off-season to his program.  Those changes proved successful as he drove from his sixth starting position to the win.

“Last year we came back full-time and struggled,” commented Sears.  “We did a lot of homework over the winter time and updated a lot of our stuff.  It’s really made a difference so far with both cars.”


His race for the top spot was a good one throughout the 35-lap feature as he was persistent in his challenges of race long leader Nick Krause.  He took the top spot on lap 20.  He made his move on the bottom of the speedway to wrestle the position away from Krause.

“No one wants to give it up, especially if you are leading and getting hounded by somebody,” stated Sears of the fight for the lead.  “You fight as hard as you can.  I finally got by him.  That’s what I needed so I could use more of the race track.”

The top was the line early that you had to run.  As the race wore on the bottom was where you needed to be.  Sears happened to find that lane before Krause.  He then stayed on the bottom for the duration to drive to the win.

“It took over about the mid-part of the race,” he said about the inside groove.  “I think you had to be on the top at the beginning, which we were.  What pushed me down there is when we got into traffic.  It felt like there was more bite down there.  Once I got by him (Krause) I just stayed down there.”

Larry Wight made a run from the 13th starting position up to the runner-up spot on the slick Brewerton surface.  He was all over the rear bumper of Sears at the conclusion of the race.

“We needed a caution just to regroup and get a little closer to the front of the field,” cited Wight.  “I think a couple more laps with the lapped traffic, it didn’t look like Tommy couldn’t maneuver quite as well, I think we had something for him.”

Like Sears, Wight was patient as he utilized the inner-lane to methodically work his way to the front.  He entered the corners slow allowing him to catch the moisture on the bottom of the track.

“I was just trying to keep the tires underneath it,” mentioned Wight.  “Now we are back to the Brewerton we use to see four years ago where it’s just smooth and slick.  You worry about sealing the right rear.  It’s definitely tough, but when you are a catching cars and passing cars it’s a lot easier to stay down there.”

Billy Decker maneuvered his way to third after beginning the main-event on the outside of the sixth row.  The veteran driver ran the top early to make it forward before he found the inner lane on the speedway.

“It was tough sledding,” commented Decker.  “The track was a little bit slower than normal.  You got to dig and claw.  We weren’t too bad tonight. It was fun.  Frankly Tom has been going really good so it isn’t a surprise to see him win.”

Krause the Small-Block that Could

Nick Krause nearly pulled off the improbably in his No. 24k small-block.  Krause held the lead for the first two-thirds of the race before eventually giving way to Sears.  He then stalked Sears from there to no avail.

“It’s just a bummer that we led to lap 20 or whatever it was,” he said.  “When you are out front, being the leader, I was running a line that I thought was good.  Tommy showed me that there was a better groove out there.  It is what it is.  I’m pretty happy being a small-block and what not.  It was really slick tonight.  That definitely helped us out.”

Krause ended up finishing fourth in the final tally as he lost a couple of spots late in the go.  He was doing all he could to get to Sears to regain to the lead.  Unfortunately, a couple of mistakes allowed Wight and Decker to get by.

“Once the 62 got by me I moved down and started diamonding off the corner,” commented Krause.  “I ran him back down.  In the back of my head I was wondering what it was going to take to get back by him.  I just over-drove the last five laps and let Larry and Billy get by me.”

Heats were won by Roy Bresnahan, Matt Hulsizer and Krause…