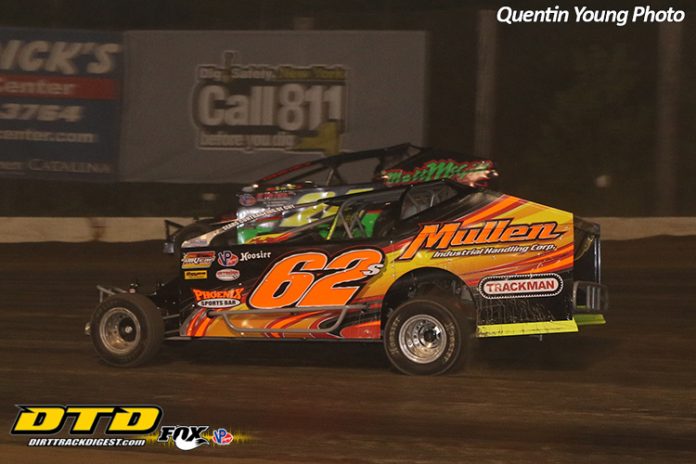 BREWERTON, NY – Tom Sears Jr. held off a late charge by Larry Wight to score the Big Block Modified win at Brewerton, the fifth winner in five races this season.

Roy Bresnahan led the opening circuits of the 35-lap Modified feature, but surrendered the lead to a rim-riding Nick Krause on lap 4. Following Krause around the top and into second was Tom Sears Jr., who took the runner up spot with six laps in. While the top two began to distance themselves from the rest of the pack, Larry Wight clawed from 13th into the top five by lap 10.

By lap 14, Sears had reeled in Krause and began looking low for the lead. Sears was hounding Krause lap after lap, but Krause adjusted his line to diamond off turn four and kept Sears at bay. However, a slip on lap 20 allowed Sears to skate by and into the lead.

Krause was not going away quietly, still within two car lengths on lap 25. Behind him, teammates Larry Wight and Billy Decker were closing fast. Wight, running the far bottom, was able to poke a nose under and then clear Krause coming to two to go. There wasn’t much distance between Wight and Sears, and Wight was definitely the quicker of the two.


While Sears was running the bottom, Wight was half a lane lower. With the white flag waiving, Wight was on Sears’ bumper. With not enough room low to make a pass, Wight went up top entering the final turns. However, the move didn’t stick, and Tom Sears Jr. notched his first win of the season. Larry Wight grabbed second, while Billy Decker nosed out Nick Krause for third. Early leader Roy Bresnahan held on for his first top five of the year with a fifth.

“It’s been a while, and we just started running weekly here again,” Sears said. “Hopefully we can make a good season out of this. Chasing Krause, I was trying to save my right rear a little bit, but not give up any ground. He changed his line and it was driving across my nose so I had to lift a little bit, but eventually we were able to get position and make the pass.”

Two Sportsman races were held, with Dylan Zacharias taking a new car to a dominating win in the first event. Jeff Taylor finally shook the monkey off his back and grabbed his first Sportsman win after many close finishes over the past two years. Quinn Wallis notched the 4-Cylinder feature win, while Casey Sykes claimed victory after a hectic late race battle with Brian Meyers.