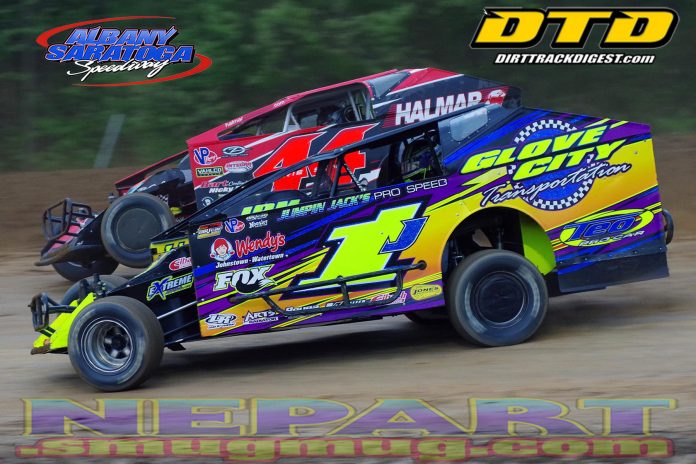 MALTA, NY – Jeff Gordon once stated that there’s no greater feeling than winning a race.

Though that statement may hold true to some extent for damn near every driver that has ever gotten behind the wheel of a racecar, sometimes finishing second can be nearly as gratifying as heading to victory lane.

On Friday night, Rocky Warner drove one of the best races of his life in the Modified division at the Albany-Saratoga Speedway in Malta, N.Y. Though the results left just one more spot in the final tally to be desired, the Gloversville, N.Y., native had nothing to be ashamed of as he handily drove his Jake Spraker owned No. 1J from his 14th starting position to another runner-up finish in Friday night’s 35-lap Upstate Buick GMC Dealers Modified feature.

What’s more impressive than driving up through the pack is who he drove by on his way to his third top-five of the 2019 season at the historic Malta oval. Names like Hearn, DeLorenzo, Britten, Mahaney amongst others fell behind him as the feature wore on. It may not seem like a career-defining moment for the former sportsman division superstar, but it’s definitely one that becomes eye-catching for certain.


In short; Rocky Warner is for real and he has arrived.

“That was a long race,” Warner stated Friday night. “I was kind of hoping it would stay green. I think we had a better car on the long green-flag runs but it’s hard to say. I could see Ronnie [Johnson] and I figured he was leading and then when the caution came out, I knew that he was.”

Starting seven-rows-deep in any Modified field at any speedway on any given night can be a daunting task at best. Yet Warner was methodical and smooth as he picked up position after position through the mid-point of the main event. When a late-race caution froze the field, Warner was able to discern exactly who he was stacked up against in the top-five.

“There was a good group of cars in front of us at that point,” continued Warner. “I just really needed the cautions to stop. Ronnie is a veteran but I was hoping that I would be able to sneak up in there but he wasn’t going to let a young guy like me get in there and drive by. He knows how to use a track up and he did just that. He had a good car and made it so we couldn’t get a clear run at him.”

Though eventual race-winner Ronnie Johnson was running the bottom groove leaving the entire outside of the speedway much like unclaimed real-estate, Warner was unable to take advantage of the high-line.

“I felt like I was too tight to run the top,” explained Warner. “I would get tight and then snap loose and I wouldn’t have the drive off the corner that I needed to so I could run him down. That and I’m running a small-block and I kind of needed to be on the bottom or in the middle to try and run the slick where he couldn’t run.”

Unfortunately for Warner, Johnson had the same game plan worked out to the most minute detail. Such is.

The 2019 season has been kind for Warner and the rest of the Jake Spraker race team. With three Modified victories thus far, two coming at Fonda [Speedway in Fonda, NY] and one coming at Glen Ridge [Motorsports Park in Fultonville, NY], his three top-five finishes at the ‘Great Race Place’ certainly don’t leave much to be desired.

“I have two second place finishes and a fifth here at Malta,” stated Warner. “And they’ve all come from me starting pretty deep in the pack. Maybe if I stop finishing up front, I’ll get to start closer to the front but to be honest, where I’m at right now, I feel good with what we have going on.”

Though his first-career modified victory at the Malta oval has eluded him thus far, Warner is more than satisfied with the results his efforts have garnered at this point in the season. Truth be told, the victories will come and the proverbial monkey will be removed in kind. Time and – above all else – talent will see to that.

“I’m absolutely happy with where I am right now,” concluded Warner. “Honestly, look where I started tonight for example. I started behind Brett [Hearn], Mahaney, Matty D [DeLorenzo], I started behind all of those guys. I got to race with them, dice it out with them and in the end, I fell just one spot short. All in all, we’re not hanging our heads low by any means.”