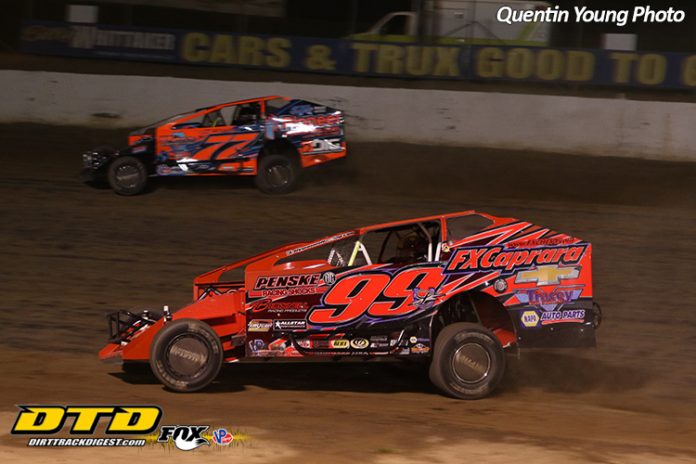 FULTON, NY – Larry Wight returned to the top of Fulton’s scoreboard, getting his fourth win in five starts with a late pass on Dale Planck.

Jeff Sykes led the opening stages of the 35-lap small block Modified feature, rim riding the top of the track while Dale Planck and Nick Krause battled for second. Planck secured the spot by lap seven, then slotting in behind Sykes up top. Within a few more laps, Planck reeled in Sykes, diving low and sticking a nose out front on lap 13. The pass didn’t stick at the time, but Planck continued his efforts down low and secured the spot just before halfway.

At halfway, the top four were nose to tail, with Planck leading Sykes and Krause. Tim Sears Jr. followed Krause in fourth, driving up from eighth, while Ronnie Davis was holding off Larry Wight from 18th for the final spot in the top five. Wight grabbed fifth on lap 23, right before a yellow for a slowing lapped car. Planck continued to lead on the restart, but Sykes dropped from second to fifth. Sears went to second, while Wight and Krause went at it for third.

After a couple laps battling with Krause, Wight got the spot and went after Sears. Sears dipped low, and Wight blasted the cushion and slid into second on lap 27. After making the pass for second up high, Wight went low as Planck occupied the top of the track. Wight nosed out in front to lead lap 29, then throwing a slider on Planck to get back to the top of the track. Planck turned back under Wight, but couldn’t get back by. After 35 laps, it was Larry Wight grabbing his fourth win in five starts over Dale Planck, Tim Sears Jr., Nick Krause, and Ronnie Davis III.


“This car has been phenomenal here,” Wight said. “It doesn’t matter what the track conditions are, it can maneuver wherever I need it to go. I just got to wait for everyone to settle in, let some of the slower cars find their lane, and then we can start moving. You don’t want to get moving too early and cook the tire or something.”