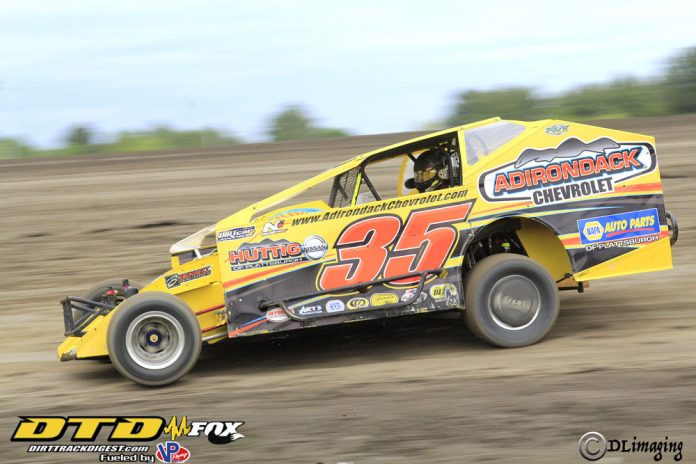 PLATTSBURGH, NY —  Kings Ferry, NY’s Mike Mahaney held off Chris Raabe on a number of restarts to pick up his first career in the Egglefield Brothers Ford 358 Modifieds.

Lance Willix took the early race lead and immediately went to the bottom of the race track to take a half a straightaway advantage.

After a caution bunched up the field, Mahaney would get a great run on the restart. Sitting in third when the caution came out, he went to the high side to pass defending champion Steve Bernier, and then worked the bottom to get by Lance Willix.

Once Mahaney got to the lead, he had to hold off the challenges of 2017 champion Chris Raabe in the late stages of the event, to win for the first time in his career.

Raabe would finish in second, Willix third, Bernier fourth, and rounding out the top five was George Foley.


Vermont campaigner Adam Pierson would use a pass on a late race re-start, to sneak by veteran Bucko Branham for his first win of 2019 in the Poirer’s True Value Sportsman.

Surviving a battle of attrition, a number of drivers were battling throughout the top five at many different portions of the event.

Branham would take over the early lead of the event, after getting by Andy Heywood. The Plattsburgh driver would work the bottom of the race track, having to survive a number of restarts.

Pierson, who’s been a master of consistency all season, took advantage of room on the bottom through turn three and four, to get by and hold on for the win.

Branham would hold on for second, Jamie Lafountain would finish in third, Travis Bruno fourth, and young gun Tanner Forbes would finish fifth.

Making a stop at the speedway was the Can/AM Mod lite series for the first of two trips for the 2019 season.

Jeffrey May used the cushion to his advantage from the drop of the green, to dominate the feature event.

Eric Caron would sneak by Tucker Holliday to finish in second, Holliday would come home third, Tyler Winger fourth, and Kevin Foster would round out the top five.

Tylor Terry would use the inside lane to his advantage, to take home his first win of the season in the Ernie’s Discount Tools Super Stocks.

Nathan Smart held of Josh Laporte in a green white checkered scenario, to go back to back in the Chris Frennier Motorsports Strictly Stocks.

Smart would also get the Chris Frennier Motorsports 2 to go bonus.