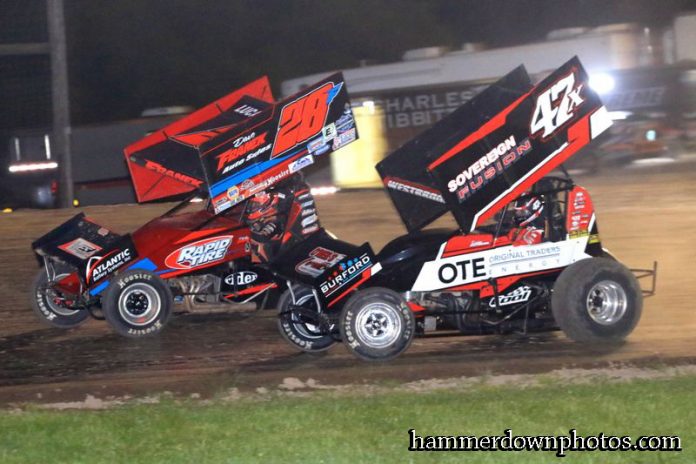 VERNON, NY – Davie Franek has very limited experience at the Utica-Rome Speedway in his career. The Wantage, N.J., driver has made it a point this season to get out on the road and hit more shows in New York rather than closer to home. After Sunday night it’s easy to say that Franek is quickly finding his groove in the Empire State. For the first time the Panther Frameworx Cole Cup powered by Donath Motor Worx was a 50-lap A-Main format. At the conclusion, it was Franek taking home the Cole Cup, the big check and a $5,000 payday.

“Definitely the biggest win of my career for sure,” commented Franek afterwards. “To do it at Utica-Rome, it’s a place we’ve struggled at. We just kept working on it and kept working on it going to our notes. We put our heads together and we knew what we had to do. Everything just fell our way. The car was really, really good tonight.”

The Cole Cup got underway with Canadian Dylan Westbrook controlling the pace from his pole starting spot. Westbrook battled Joe Trenca on the opening lap before securing the lead. He remained the leader before the first caution came for a spinning Larry Wight on lap six.

Westbrook remained in the top spot on the restart with Franek moving up to second and Trenca falling back to third. Franek stalked Westbrook for the top spot only to have him be up to the challenge in the early stages of the extra-distance affair.


There were 15-laps complete when Danny Varin entered the fray with the top two as all three of them raced in traffic. Varin pulled an amazing three-wide move to go from third to first on lap 17 as the trio raced off the second turn.

Varin showed the way until a bobble on lap 21 allowed Westbrook to sneak back by him for the lead. Franek did the same relegating Varin back to third. They remained the top three when the competition red flag period was called for after 25-laps were complete.

After a 10-minute break the cars were refired with Westbrook holding the race lead and Franek pulling up next to him for the green flag. It was all Westbrook and Franek at this point while Matt Tanner made the move to take over the third position at the green.

Caution was needed on lap 32 as Jonathan Preston got off the top of turn four. Once racing resumed Westbrook hit throttle to bring the field to green and as he did the car pulled a wheel-stand coming down the frontstretch allowing Franek to take over as the leader. At the same time Chuck Hebing moved up to second.

Franek and Hebing showed the way while Westbrook was forced to contend with Tanner for the third spot. While the top three mixed it up Shawn Donath and Larry Wight, who both ran the B-Main, were working their to the front to become contenders.

Franek found himself in traffic on lap 39 allowing Hebing to close in to challenge for the lead. Before Hebing could make his move one final yellow came on lap 41 for Paulie Colagiovanni as he spun in turn two.

Hebing pulled along-side of Franke on the restart while Tanner looked down to the bottom as field raced into turn one. It was all for naught as Franek went on to take the checkers for his first ever Utica-Rome Speedway win. Hebing came home second while Tanner, Wight and Donath completed the top five.

Rusty Smith started on the outside of the front row in the DirtTrackDigest.com DIRTcar 358-Modified feature and he used that to propel him to the lead at the start. He jumped away from the field over the early laps as the racing behind him heated up.

Dave Marcuccilli started in the eight position while he quickly found a groove to his liking on the bottom picking of cars one at a time to get up front while Rudolph chased him up through the field after starting 11th. Marcuccilli took over second on lap 11 and then took the lead from on lap 12 with Rudolph also getting Smith to move to in the runner-up position.

Just as Rudolph went to take the lead the yellow flag was shown for a spinning Aaron Jacobs in turn four. Marcuccilli and Rudolph got the race back underway as they thrilled the fans with a side-by-side tussle for the lead. Rudolph finally managed to rip it from Marcuccilli’s clutches on lap 17 as he raced to the bottom of turns one and two.

Rudolph made no mistakes over the final 13 laps to pick up his first win of the season at Utica-Rome to cap off a three-win race weekend for the Ransomville, N.Y., driver. Marcuccilli settled for second with Billy Dunn, the defending track champion, making a large charge to steal third. Wight ended up fourth while Lance Willix was able to round out the top five.

The Broedel Fuel Group DIRTcar Sportsman 20-lap nightcap saw Rocco Leone snag the lead on the opening circuit away from front row starters AJ Digsby and Chris Bonoffski. His lead lasted only five laps as veteran Mike Button was able to take advantage of a restart on lap six to secure the number one position in line.

Button kept everyone at bay as he raced out in front holding off both Leone and the rest of the field. That was until caution came on lap 15 for CJ Casteletti as he spun off the track in turn one. The restart put everyone on Button’s back bumper.

Button led one more lap before 10th starting Zacharias motored his way to the outside of Button in turns three and four for the lead. Once in front, he wasn’t challenged over the final four laps en route to the win. Button finished second with Kyle Inman advancing from 12th to finish in third. Leone and Filbeck took the final two spots in the top five.

Frank Hyatt brought the Ted’s Body Shop DIRTcar Pro Stock field to green while keeping the field at bay for the first two laps of 20. He then surrendered the lead of the race to Mike Welch as he went by in turns three and four. Welch kept his hands on the advantage at the front of the field until lap seven when Pete Stefanski made the pass for the position on the bottom of turns three and four.

A long caution came as oil was put down on the speedway by a car losing a motor on lap 10. Eventual winner Coonradt made the most of the restart as he went to the top of turns one and two to take the lead on lap 11. Coonradt drove away to earn the victory over Stefanski, Nick Stone, Shane Henderson and Jason Meltz.

Payton Talbot made it two-for-two in the Bernie’s Extreme Performance Parts Rookie Sportsman 15-lap feature. Talbot wasted no time getting to the lead as he got there on the first lap. From there he set sail to grab the checkers over Ed Lukas, Bobby Heintz, Alexis Jacobs and Colby Felber.

Next week the half-mile is silent as action takes to the Utica-Rome Kartway for the first time after the opening event was rained out. Pit gates for the Sunday, June 30 show open at 10 am with hot laps slated for Noon. Racing action will get underway promptly at 1 pm. Admission is $15.