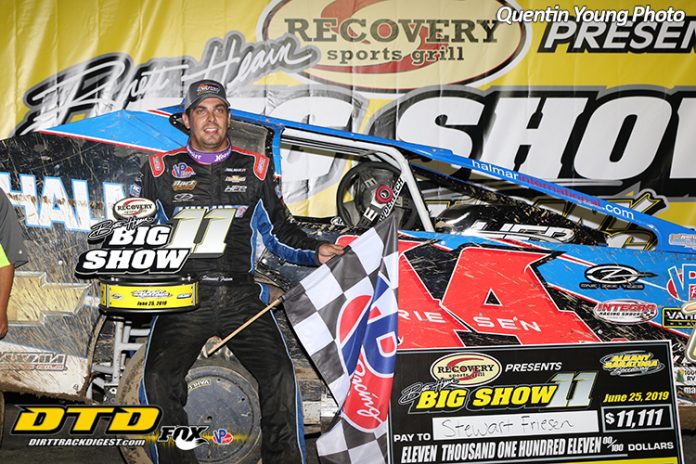 MALTA, NY – It what will go down as an instant classic, Stewart Friesen bested Big Show XI promoter Brett Hearn to claim the win on Tuesday night at the Albany-Saratoga Speedway.  Friesen got a late run at Hearn to take the Super DIRTcar Series win.

“Boy am I sure glad he made this race 110, 111 laps, whatever it was,” Friesen said. “It was tight and kind of a handful there early.  We didn’t expect the track to have that much bite. It was a workout, but a lot of fun. The car was good but a handful, so maybe nobody will want to buy one and we can keep this one for a while.”

Chad Phelps and Mike Mahaney fought door-to-door in the opening circuits of the 111-lap event, with Mahaney eventually secured the spot running the cushion. Erick Rudolph followed through for second up top, and after grabbing second up top on lap 10, Rudolph dropped low and went to work on Mahaney. Mahaney saw the move and switched lanes to defend, and Rudolph went back to the high side and got around Mahaney for the lead. On lap 13, just as Rudolph cleared for the lead, Mahaney slowed with a flat right rear tire and the yellow flew. Under caution, Rudolph went pitside with a flat left rear.

Billy Decker inherited the lead under the caution, darting away from Chad Phelps on the restart. Brett Hearn and Stewart Friesen battled for third, while 12th starter Matt Sheppard clawed past Mat Williamson for fifth. After a lap 28 yellow for Jessey Mueller’s flat, Hearn got under Phelps for second and went after Decker for the lead in his own race.


By lap 40, Hearn was within a couple carlengths of Decker, with Hearn running a lane lower than rim-riding Decker. On lap 43, Hearn made his first bid for the lead, poking a nose out front for a split second. However, Decker stood on the throttle and not only took the lead back, but pulled away from Hearn. Within a handful of laps, Hearn was now fending off Friesen for second rather than being on the offense going for the lead.

As the lap counter hit 60, Hearn couldn’t shake Friesen. Even while battling, Hearn and Friesen were reeling in Decker, and soon enough the top three found themselves separated by less than a second. Decker up top, Hearn in the middle, and Friesen down low was the way they ran, nearly three wide for the top spot before Larry Wight blew a right rear running eighth on lap 68.

Friesen did not have a good restart. While Decker and Hearn kept their battle going up front, Friesen slipped to fifth as Williamson and Sheppard got past. Hearn was all over Decker, looking low at every turn. Playing defense, Decker swapped lanes entering turn three with 81 laps down, and Hearn nearly slid by him up top. The next turn, Decker went back to the top and dipped his right rear tire over the cushion, and Hearn drove to the lead, officially scored in the top spot on lap 82. Meanwhile, Friesen disposed of Williamson and Sheppard to get back to third.

With 85 being shown on the scoreboard, Friesen was working over Decker for second, rolling the bottom of turns one and two while experimenting in three and four. Friesen pulled the trigger with 89 laps in, driving under Decker for the second spot. With 22 laps to go, Friesen was nearly a straightaway behind Hearn, but was quickly chipping away at the lead.

By lap 95, Friesen had caught Hearn and was evaluating both of their lines to find the best route by. Just as it seemed like Friesen had the run he needed to get spot, the caution flag flew for Rusty Smith on lap 98. Hearn got a good restart and was able to put a small amount of distance between himself and Friesen, but it wasn’t going to last.

While Hearn continued his line through he middle, Friesen switched from the bottom to the top in turns three and four on lap 105. The result was Friesen getting massive runs out of turn four, crossing over Hearn and trying to drive under him entering turn one. After a handful of attempts, Friesen got the launch out of turn four he needed on lap 109, two to go. Throwing it extra hard down low entering turn one, Friesen slid up in front of Hearn and secured the spot.

“I was looking around and sizing it up under caution,” noted Friesen. “We were good on the bottom but I didn’t have the right gear to get a good drag race off the bottom. I had to get some momentum and slide in there.”

While Hearn gave chase in the final circuit, it was Stewart Friesen claiming $11,111 in the Big Show XI. The win also guarantees Friesen a starting spot in the Super Dirt Week 200, meaning Friesen can take Thursday and Friday off from Oswego to focus on NASCAR efforts.

“That just saved us an assload of money on flights,” Friesen said about Super DIRT Week. “We’ll see you Sunday morning.”

Coming up just short of his second Big Show triumph was Brett Hearn. Hearn led 27 laps on the night, almost including the important one.

“Friesen is probably the most diverse driver we’ve seen in decades,” said Hearn. “Certainly at this time he’s one of the best. We did what we could do, ran as hard as we could, and ran ourselves out of right rear tire. He always finds a way to pull that little bit extra out the last couple laps.”

On top of trying to win a Super DIRTcar Series race, Hearn was also promoting the event for an eleventh time. A slam packed crowd saw the promoter nearly write his own name on the check.

“It was a win for me just seeing people smiling and having a good time,” Hearn stated about The Big Show. “I won this race before I even took the green, I’m really happy with this event and to be in contention to win until the last lap, I was looking at that $11,111, but I was looking a little too soon.”

Mat Williamson had a strong night, not quite enough to challenge Hearn and Friesen, but enough to snag his second podium of the season to go along with a runner up at Can-Am.

“We were pretty dejected after Weedsport,” Williamson said. “The team worked their tail off, and here we are back on the podium. I hope we can be consistent, and if we can we will be there in the end.”

McLaughlin finished in fourth followed by Matt Sheppard in fifth. 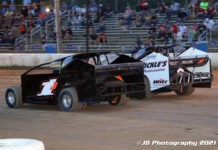