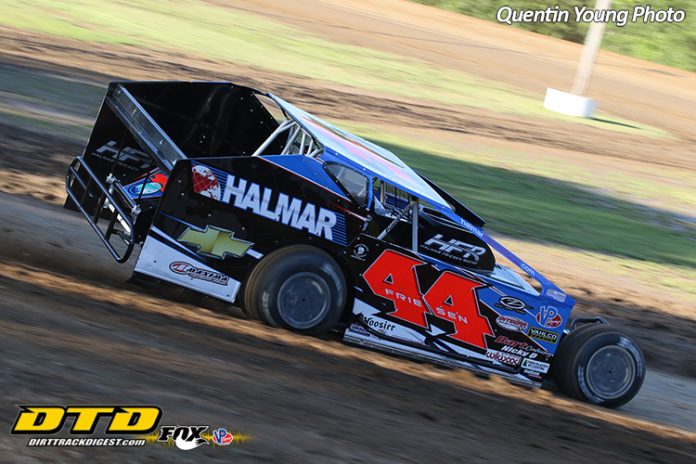 MALTA, NY – Stewart Friesen’s victory in the 2018 edition of Brett Hearn’s ‘The Big Show’ was – for all intents and purposes – a gift.

On Tuesday night, the Sprakers, NY, Modified pilot earned every single solitary penny in the 2019 edition of what has become one of the most anticipated events on the Super DIRTcar Series schedule.

Debuting a brand-new DKM chassis for the event, the Canadian import time-trialed second in his group and finished third in his heat race. Not stellar by his nearly unreachable standards, but more than good enough to place his Halmar sponsored No. 44 into the ever-important redraw for the 111-lap main event.

Rolling off from the seventh starting position on the grid, the defending race-champion quickly worked his way into the top-five in the opening circuits leaving many to assume that his march to the front was all but inevitable.


As it turns out it was, however, it took a seemingly inordinate amount of time for Friesen to assume the lead. 109-laps to be exact.

After spending nearly the entirety of the event marred back in the second half of the top-five, Friesen began to make his presence known when early race leader Billy Decker in his familiar No. 91 began to fade in the latter stages first handing the lead over to race promoter Brett Hearn on lap-82 and then losing second to Friesen on lap-89.

Friesen had closed in and nearly gotten by Albany-Saratoga Speedway’s all-time winningest driver 30-laps prior and with less than 20-circuits left, he began to slice Hearn’s lead lap-by-lap using the bottom lane through turns one and two in hopes of getting another shot at the familiar No. 20 Teo Pro Car. There was only one foreseeable problem with his late-race charge; he was running out of time.
Until lap-98.

A late-race caution erased Hearn’s advantage and gave Friesen the chance to not only start directly on the proverbial back door of the former, it gave him a much-needed chance to search around the speedway for a different line. Much like the exploits of Lewis and Clark, he found one.

On the restart, Hearn slipped away ever so slightly but Friesen began running the high side of the speedway in turns three and four which gave way to a noticeable increase in momentum on the exit of turn four and incredible run at the end of the front stretch entering the first corner.

For four consecutive laps, both Hearn and Friesen found themselves running side-by-side at both ends of the speedway with Friesen grabbing the lead heading into turn-one on lap-108 but immediately handing it back to Hearn when he couldn’t hold the bottom through the apex of the corner.

The following lap, Friesen changed his corner entry just enough to make the pass stick with less than two laps to go, driving to his third ‘Big Show’ victory since 2016 and in doing so proved that extra-distance races are anything but boring.

“That was wild,” said an elated and tired Friesen in victory lane Tuesday night. “When we had that caution on lap-98, I thought to myself ‘I’m sure glad Brett [Hearn] decided to make this a 111-lap race.’ It was exciting and the track prep they did before the feature didn’t fade away at all. What a race and what a race track.”

The old adage states that close doesn’t count. Then again, at times it does. Friesen wasn’t perfect from the moment he unloaded on Tuesday night, but he was close enough. With a fair time-trial session and a solid heat race performance, there was little tweaking to be done prior to the feature event.

“This is a brand-new car out of the DKM shop,” continued Friesen. “And thanks to those guys for really grinding and trying to get something good on a black, slick race track like we had tonight, we had something for him [Brett] at the end. We’re really good on a slick track and once we polish up a few things, this car will be really, really good.”

The late-race caution with only 13-laps remaining was fortuitous for multiple reasons. Aside from the obvious of allowing him to restart with race leader Brett Hearn, it also allowed him to perform a quick – and frankly, observant – study session of the ever-changing speedway surface.

“On that last caution I went to the top of three and four and saw that it was kind of ran in a bit,” he explained. “There wasn’t a ton of grip there but there was just enough to build up some momentum for the exit of turn four to give us a really, really strong run down the frontstretch into turn one.”

It was that high-line through the opposite end of the speedway that more than likely – though not known for certain – was the pivotal difference that Friesen needed to out-drag Hearn into turn one and into the lead exiting turn two on lap-109.

“I thought I missed my chance with three to go,” said Friesen. “I passed Brett and slid up a lane and let him go back under me down the back stretch. I just had to calm down and regroup. I was getting hot and tired and this car was super, super tight early and hard to drive but it turned out to be a good 100-lap car and it paid off for us. This is a fresh piece with a strong Billy The Kid engine under the hood and it was just our night.”

The fact that Friesen has won a lot of big races over the course of his career – and that may be a drastic understatement – his latest triumph at the Malta, NY, oval, without a doubt, ranks high up on his list of accomplishments.

“This is a special race to win once let alone three times,” He continued. “The competition that comes to this race, the top brass from DIRTcar that comes to this race, the money that’s on the line and the starting spot for Super DIRT Week in Oswego [Speedway in Oswego, NY] make this one of the marquis events of the year for us. This is definitely one you circle on your calendar and one you really want to win.”

For a few months, Stewart Friesen had such a string of bad luck that he easily could have written a book titled ‘How to Lose a Race,’ yet with his recent victories at the Fonda Speedway [in Fonda, NY] and a Short Track Super Series victory at Outlaw Speedway [in Dundee, NY], his bad luck has faded returning the three-time ‘Big Show’ victor to his accustomed winning ways.

“I have to thank Chris Larsen [Halmar] for believing in us,” concluded Friesen. “He loves to win these high-paying special shows and when we do, we can work a little easier. We had a few rough months there but he’s given me everything I need to get the job done and we were able to do that tonight.”

Brett Hearn was out to lunch last Friday night during the 35-lap Modified feature. What a difference a few days make. After going through the car and making some much-needed adjustments, Hearn was able to time-trial fastest out of 43 cars and earned his 69th career ‘Quick Time’ on the Super DIRTcar Series trail.

Mat Williamson looked like a fish out of water at the Super DIRTcar Series stop at Weedsport. The Canadian pilot regrouped and drove his Buzz Chew Chevrolet owned and sponsored No. 88 to a solid third place finish.

Sometimes it’s good to take the money and run. After failing to qualify in his heat race and his last chance showdown, the No. 34 of Andrew Ferguson went to victory lane after winning the ten-lap non-qualifiers race. Given the option to start from the 29th position in the 111-lap feature or take the $750 check, Ferguson chose the latter.