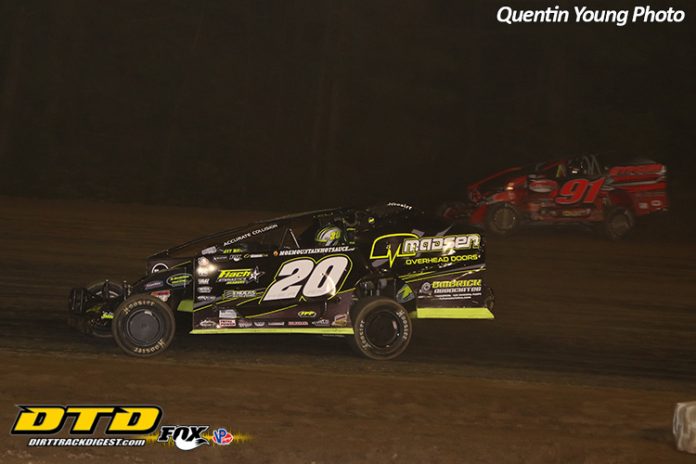 MALTA, NY – Brett Hearn has only won his own race once since its inception.

After Tuesday night, he’ll have to wait another year to capture his second victory in the coveted ‘Big Show.’

With 134-career victories at the ‘Great Race Place,’ it seemed as if the wily veteran was going to add another tally to an already legendary career behind the wheel of a center-steer Modified. In fact, had the race only been scheduled to reach the century mark, he almost certainly would have. Unfortunately, he managed to prove once and for all that you can have too much of a good thing.

After moving past early race leader Billy Decker on lap-82, Hearn was poised to head back to victory lane at the Albany-Saratoga Speedway [in Malta, NY] for the second time in 2019.

After a late-race caution erased Hearn’s advantage over the driver of the Halmar No. 44, the right-rear tire had enough life left in it to go 100-circuits with ease; those last 11-laps, on the other hand, turned out to be an entirely different story.

After getting the two-to-go signal from starter Dave Farney, Friesen drove to the inside of Hearn entering turn-one and never looked back relegating the driver from Sussex, NJ, to second place when the checkers fell at the conclusion of the Super DIRTcar Series main event.

Over the thousands of races Brett Hearn has competed in over the entirety of his storied career, it’s almost certain to assume that on more than a few occasions, the eight-time Albany-Saratoga Modified track champion had wished for a few more laps at the end of a race; a few more circuits to close the gap and steal away another hard-earned feature win.

Last night was not one of those moments.

“I guess now I wish I didn’t make this race 111-laps,” Hearn said with a laugh after the feature Tuesday night. “I guess hindsight really is 20/20 but, in all seriousness, it was a great show. Everybody is happy; the show ran smoothly, the entertainment was good, the show ran off on time and on schedule and then to be in the lead with only ten-to-go, what a night. Absolutely fantastic.”

Only a few nights previous, Hearn looked like a proverbial fish out of water during the Modified feature with a finishing position well outside of the top-10. Needless to say, it didn’t take the duo of Hearn and Mark Flach long to return to top form as the No. 20 team rolled off the hauler with a noticeably quick Teo Pro Car.

“We were bad Friday night,” Hearn continued. “We were really bad. We were probably as bad as we’ve been here in over two-years so I didn’t know what to expect tonight so to come off the trailer and set fast time like that was really encouraging for us and then to win our heat race was great to get a decent starting spot for the feature. We went from bad on one night to being in contention for a win tonight.”

The transition from being out of the ballpark to being in well within its confines looked seamless, yet it took the entirety of the Madsen Overhead Doors team to bring Hearn’s Modified back to the forefront and out of the background of his fellow competitors.

“It took the whole team putting their heads together to get this car figured out,” He explained. “We decided to make a couple of shock changes and a couple of geometry changes to the car to get us back to where we needed to be and tonight, it obviously worked.”

Saying ‘it worked’ is a gross trivialization at best.

Through the middle and latter stages of the feature event, Hearn was able to run the bottom to the middle of the speedway surface with ease where most of his contemporaries were struggling to find side bite and forward grip. However, judging from the appearance of his right-rear tire at the conclusion of the night, that may have hurt his chances of victory nearly as much as it indelibly helped.

“I felt like I was getting good momentum in the middle of the track,” commented Hearn. “But maybe that’s what might have worked the tire over a little too hard. It [the right-rear tire] came apart a bit. I mean, it was aggressively cut for the race so that probably didn’t help it but how do you know? It’s a combination of everything really.”

Before Stewart Friesen came along during the closing stages of the ‘Big Show,’ Hearn had another dogfight with another stout – and legendary for the matter – competitor; the ‘Franklin Flyer’ himself and driver of the famed No. 91 Modified, Billy Decker.

“He [Decker] was getting these really big jumps off the top,” Hearn stated. “But he would slip in the middle of the corner and I could get to him more and more every lap and finally he slipped up a little bit on the top and I got that good, big run in the middle and that’s what we needed.”

It was what he needed at the time; unfortunately, it wasn’t what he needed to complete his drive for victory. Much like the closing laps of the Eastern States 200 at Orange County [Fair Speedway in Middletown, NY] a few years prior, an old rivalry was about to be renewed yet again.

“When Stew [Friesen] passed me going into one and then slipped up, I thought I had it,” Hearn said. “I didn’t think he’d find anything up top with a couple of laps to go and then he found just enough to get him that little burst off of four and that was it. I can’t complain really; it was a great night for us.”

“To see everybody smile after the race and to hear them say ‘wow, what a show,’ is satisfying,” Hearn concluded. “It was a great night and the track was fantastic. We could race top to bottom on it, it was entertaining and it was a great time. Every time we put this race together it just gets bigger and better. It’s never the same event; something different happens every year and I’m already looking forward to doing it again in 2020.”