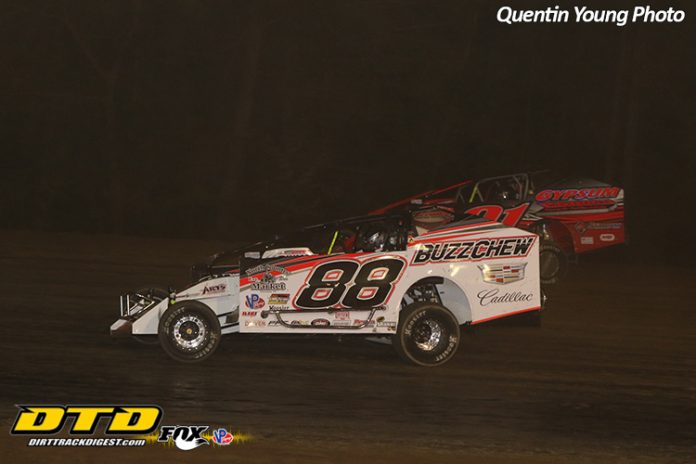 After his previous outing with the Super DIRTcar Series at Weedsport [Speedway in Weedsport, NY] left both himself and his Buzz Chew Chevrolet team feeling rather deflated with a less than ideal result and a subsequent 18th place finish, it was time to regroup.

Regroup they did and they did so in earnest.

After time-trialing third in his group to kick off the night at the Malta, NY, oval, the Ontario native drove to an impressive second-place finish in his qualifier giving him a chance at great starting position via a redraw.


Firing from eighth on the grid, the Canadian hot shoe stayed well within the confines of the top-ten and just out of range of the top-five of the running order throughout the opening stages of the 111-lap feature event on Tuesday night, eventually grabbing the third position from Billy Decker at the conclusion of lap-96

Though he came close to reaching the top-two front runners of Brett Hearn and eventual race winner Stewart Friesen – and he was able to garner a run on the latter on a lap-73 restart – Williamson wasn’t able to close the gap and settled for a much-needed and well-deserved podium finish in the 2019 edition of ‘The Big Show.’

“We got close to Stewie [Friesen] on a restart but he was more consistent than we were,” Williamson stated post-race. “We had a good car. It was tight enough that it was hard to drive consistently. We were very good some laps and then we’d slip up on some others and I think that’s how Stewie got back by me.”

There haven’t been a lot of opportunities for Williamson to garner the experience and track time needed for most to find success at the speedway dubbed the ‘Great Race Place,’ yet after his performance, it’s safe to assume that he learns rather quickly and what’s more, he has come to understand how the speedways moniker was earned.

“This place is awesome to race at,” he continued. “A lot of people complain when the track gets black and slick like that but you can race all over and that’s the best racing there is really. That’s what I’m used to and I like it when the track gets like that. We could run all over top to bottom and what a great race at the end. I watched the last ten-laps from behind those guys and man, what a race. I hope the fans really enjoyed it.”

Williamson’s disappointment at Weedsport quickly turned into another teaching moment for the driver of the No. 88 Bicknell chassis Modified. So much so that he took his experience and lessons learned from one slick track to another with seamless ease.

“I was tight enough tonight that I could roll right through the middle,” explained Williamson. “I think Stewie was a little bit freer than we were so he could maneuver around and that’s probably how he got Brett [Hearn]. We had a good car and I can’t thank Buzz Chew Chevrolet enough for the opportunity to wheel this thing. It’s pretty awesome and with the chassis, motor and shock combination we have, we showed what we are capable of tonight.”

Hindsight – the dreaded curse of all drivers – being what it is, there are countless ways that the evening could have gone differently for Mat Williamson. Though that may be the case, the result was still one that left very little to be desired and furthermore, it turned into a momentum builder as the 2019 Super DIRTcar Series enters the summer months.

“I think that maybe if we had more laps at this place with the same car we probably would have been up there with the top-two,” Williamson concluded. “But this was not a bad outing after Weedsport. We had to regroup and that’s what we did and I’m proud of the guys for doing that. It’s nice to end up with a good finish tonight.”